Dark and brooding, stylish and cool, Jouran is the story of a small band of assassins under the employ of the Tokugawa Shogunate. In this alternate history, Tokugawa Yoshinobu is still in power in 1931 thanks in large part to the discovery of the energy source Ryuumyuaku, or Dragon Vein. As a result, Tokyo is a glamorous city where science and Edo-period tradition merge.

Among the assassins is Yukimura Sawa, our protagonist (voiced by Mimori Suzuko, Kamisama Hajimemashita’s Nanami). Sawa is a stoic, no-nonsense young woman who grudgingly shares her living space with the young orphan Asahi who cooks her meals, and is the type to threaten a flirting guy with murder and not be joking. 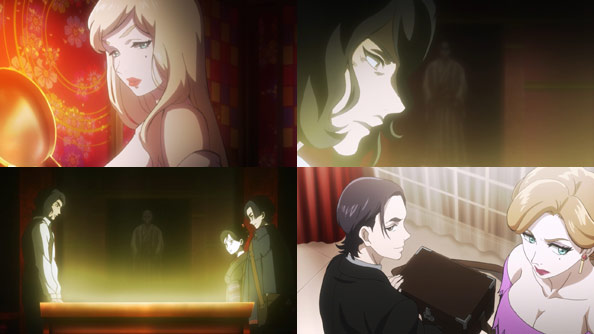 Her two fellow assassins are the sardonic Tsukishiro Makoto (the striking Shouta Aoi) and the seductive Hanakaze Elena (the musician Raychell), who refers to Sawa as “the little bitch”. Their group’s leader is grim man named Kuzuhara who believes the dissident group Kuchinawa will attempt to assassinate the shogun at a banquet celebrating the completion of the new Tokyo Castle.

Makoto and Elena go undercover as party guests and end up following a bigwig confirmed to be working with the dissidents on the sly. Sawa is notable for her absence from the party, while lil’ Asahi waits at the dinner table in vain.

Makoto and Elena follow the bigwig and his henchmen to a secluded warehouse where an exchange of materials is taking place, and the assassins quickly take down everyone there. Elena uses a rather unique umbrella crossbow, while Makoto uses what I’d describe as a lightsaber katana.

However, their true target, a kemono or “changeling”, is nowhere to be found. Makoto bombs the facility and he and Elena head to the eastern gate of the castle, where he knows one of the vast network of secret tunnels leads from their current position.

Sawa is there, ready to head off the changeling, doing so by transforming into one herself with the help of a white raven. It’s depicted as a volatile and extremely painful process, but once she’s transformed she resembles a serene yuki-onna.

When she realizes her changeling opponent is the young man who flirted with her at the bookstore, she hesitates momentarily, and is wounded, but ultimately takes care of business, slicing off the changeling’s hand and finishing him off with a haunting poem that matches Sawa’s icy beauty and that of the scene: 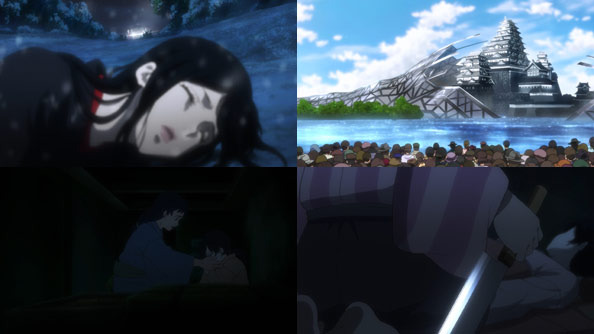 Makoto and Elena arrive just after she returns to human form and passes out. The threat to Yoshinobu would seem to be dealt with, but the next day at the official opening ceremony of Tokyo Castle, we witness scenes of carnage involving more changelings, presumably within its walls.

Sawa is recovering at home, but even in sleep she gets no rest, as she’s transported back to when her brother was murdered along with the rest of her family, by Janome, Kuchinawa’s executioner. She’s vowed not to die and join her family until she gets revenge on Janome, but Asahi seems prepared to kill her in her sleep with a kitchen knife. I guess she doesn’t like being kept waiting for dinner, huh?

Like Sawa, Jouran and its familiar-yet-bizarre alternate Tokyo carries itself with a quiet, assured dignity, but just as Sawa is tormented by trauma and tragedy, corruption, suffering, and death lurk beneath the gleaming Shogunate capital, much of it delivered by monsters in suits and with claws.

Assuming Sawa survives her tiny assassin’s attack, I’m excited to watch her continue to walk the line between her official duty and blood debts.