The fourth level’s part two starts with a flashback—I think—to an Alice wondering where Hakuno went, and in the process of absorbing various objects around her to replenish resources, transforms into a grotesque monster that forces the Masters to flee to lower floors, and killing and eating those that don’t. None of this seems to be anything Alice the Master intended.

Back in the “present”—whatever that even is—Hakuno, Saber, and Rin make their way back to the castle. The phenomenon that sent them back was only a “respawn”, not a time loop; and all parties involved retain their memories of the first attempt.

Rin (flashing an epic Shaft head-tilt) continues to drop hints to Hakuno about Dead Face without coming right out and saying that’s what he is, DFs being humans “rebooted by their grudges”, and Hakuno not knowing what beyond hatred propels him upward.

When Hakuno starts daydreaming of hanging out with Alice, reading to her and playing tag, Amari is also there in some form. When he comes back to reality, he, Saber and Rin face the monster they’re assuming is the Floor Master’s Servant.

Rin puts up a barrier, but the monster sends a hail of scissors at it, shattering it and her. Hakuno manages to spend another command seal, but before the monster is destroyed and the “game” reset, he ends up back in the dream. 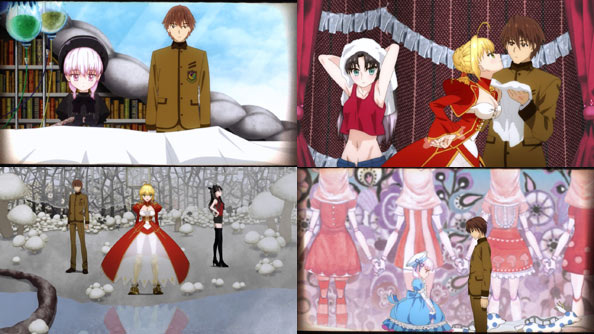 There, Hakuno meets Alice in her true form, covered in bandages, lying in a bed, hooked up to all manner of IVs…and dead. The living, walking, talking Alice Hakuno has been interacting with is no more than a dream that dead Alice is watching, and is herself dreaming in Alice’s place, even able to take Amari’s form.

Back at the starting point, after Hakuno washes up and Rin apparently had a bath, they set out once more with Saber, for what Rin hopes will be the third and final time. As they walk through the forest, Hakuno ponders what and where he is: a man with no past and a place where the past has piled up to the point of near-madness.

Hakuno feels of a piece with the place because the hatred that drives him is essentially an obsession with the past; an inability to let something go. Saber tells Hakuno a story of a Master she once had “much like him”, with neither memories nor a wish, aiming to ascend only out of a desire to live on. At Angelica Cage, the highest level, the Master was defeated by “Twice Pieceman.”

Saber’s point, I believe, is that there are no guarantees. If you get to Angelica Cage, you have to beat Twice. If you beat Twice, Moon Cell has to decide to grant your wish. She wants to know if Hakuno will still ascend despite all that uncertainty. 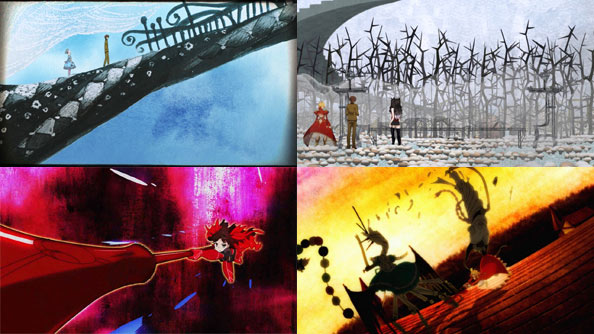 In the dream (and a repeat of last week’s cold open), Hakuno has already won the third round, as Alice conceded the fight by not showing up. He leaves her with the promise he’ll be back once he’s won the Grail. And it certainly seems to be the case that he did return even after failing to win it.

Once back with Saber and Rin, Hakuno acknowledges that he’s no one special; just a fake who made it this far in someone else’s place. But even as a fake, he wants his feelings to be true. His time with Alice in his dreams have spurred him to want to ascend not just with hatred, but with hope.

In the present, however, the Servant still needs to be dealt with, and between Rin seemingly unleashing her trump card—transforming into Lancer, complete with Gae Bolg—and Saber’s coup-de-grace, it feels as much like putting a wretched creature (or ghost, as it were) out of its misery as defeating the floor boss.

It also carries on the Monogatari tradition of lots of discussion punctuated by short, intense bursts of decisive action. On to the fifth level.

The third level, the “Nameless Forest” is a totally different animal than the ones that came before, both in design and purpose. First of all, it’s way trippier, as Shinbo creates a lush and textured wonderland inspired by the aesthetic of the illusory worlds witches created in Madoka.

These bizarre, whimsical surroundings make for a great backdrop as Hakuno, Saber and Rin attempt to find the Floor Master. According to Rin, the third level is the land of dreams where “ghosts” gather, ghosts being souls transferred into information by Moon Cell.

Rin also kinda answers my question from last week, in that Death Face is “something different” from the other ghosts,embodying a “different concept of death.” She also calls it a thousand-year-old legend, apparently unaware that Hakuno is that legend (or feigning ignorance for some reason).

Things get increasingly weird in terms of time and space, with Saber almost instinctively taking Hakuno’s hand to ensure they won’t become separated. Even so, with all off the multi-colored drawers, tanks containing thousands of playing cards, and most concerning, a preponderance of mushrooms, Hakuno eventually finds himself somewhere other than Saber’s side.

That place is in the presence of the Floor Master whom Hakuno says goodbye to in the episode’s cold open; we see his victory and ascent to the fourth level so we know it happens (or happened in the past); it’s a question of how.

This Master is a ghost named Alice, and this wonderland is where she’s been ever since a war that killed everyone else, and after her life of illness was ended by excruciating pain caused by adults in a hospital.

Alice wants nothing more than to have someone like Hakuno to play with forever and ever. Quite suddenly, Hakuno “snaps out of it” and is once again in Saber and Rin’s presence. A vision. 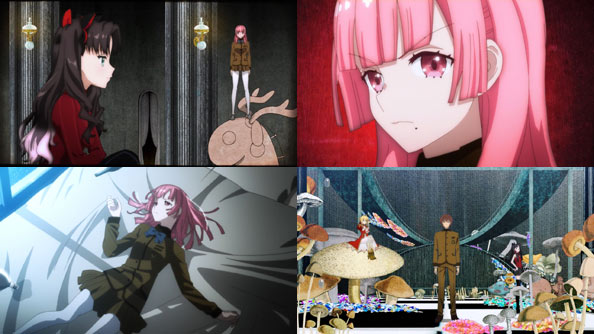 Rin and Hakuno each have one more vision while in the midst of the mushrooms – both involving Amari Misao, their “classmate” in “high school.”

If ghosts are reproductions of people’s states at the moment of death, Amari’s regrets come through strong and clear; both her insufficient strength (which Rin can sense) and when she tried to seek the week to defeat her enemies, only to find there was no one weaker than her.

Having returned from their visions, Hakuno and Rin find signs of a battle, and Saber goes after a shambling, scissors-shooting construction of various objects as if it were like any other opponent. She manages to slash it in two, but the moment she does she and the other two are instantly transported all the way back to where they started, next to the ladder that brought them there. Even time has seemingly reverted.

Rin surmises this is the work of the Noble Phantasm known as “Nursery Rhyme”, which is being used to ensure they keep repeating the same day forever. With such a power, in such a place, being wielded with such a character as the Alice we met, it’s pretty obvious we’re dealing with Caster. Swords and bullets aren’t going to do the trick this time.