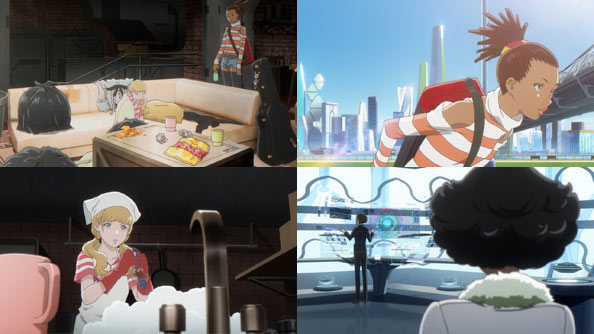 The narrator again refers to the “Miraculous 7 Minutes” before we return to the story of how Carole & Tuesday got there, starting with Tuesday’s first morning waking up somewhere other than her mansion. While Carole is out of there not long after 7, it takes much longer for Tuz to wake up, and when she does, immediately demonstrates her utter ineptness when it comes to cleaning.

Meanwhile, Angela finishes up a photo shoot at a studio where everyone applauds and gushes over her, something she’s obviously taken for granted all her life. When she arrives at Artience Lab, she doesn’t get that treatment she’s so used to. If anything, Tao (voiced most imperiously by Kamiya Hiroshi) treats her like a nuisance. But as long as he creates the perfect song for her, she doesn’t care. 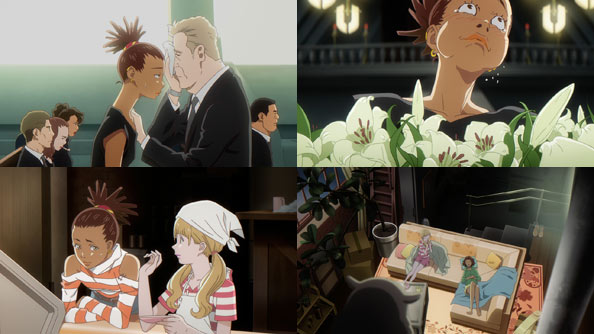 If Tuesday is terrible at cleaning, Carole proves equally terrible at holding down jobs. Hired as a professional mourner at a funeral, she ends up laughing hysterically when a butterfly lands on the priest’s head, earning her her second pink slip in as many days. It’s clear if Carole can catch a break with her music, she’d be a better fit for that than either crying or serving burgers to misogynists.

That night, Carole remarks that if she goes to bed in the wrong state of mind she’ll have nightmares, so she and Tuesday exchange mentions of things that they like, and find they’re both big fans of both Cyndi and Crystal. Carole also learns Tuesday is a total rich girl, complete with a limitless black credit card—but Tuz can’t use it or her family will find her. 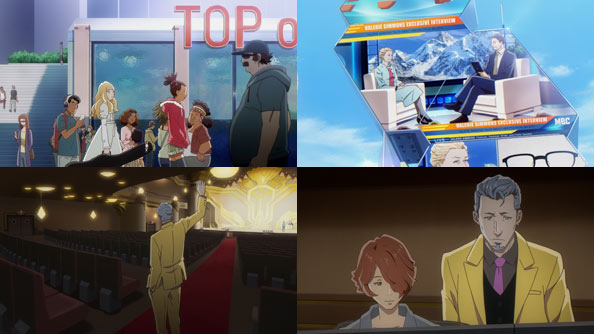 The next day, Carole and Tuesday are out on the town on a mission: use the real grand piano at the Martian Immigrant Memorial Hall’s main stage, where DJ ERTEGUN is already setting up a future show with one of his producers, Roddy.

On the way, Tuesday sees her mom on TV—turns out she’s the governor of Herschel state, and potentially running for president—but doesn’t let Carole in on that nugget of information. 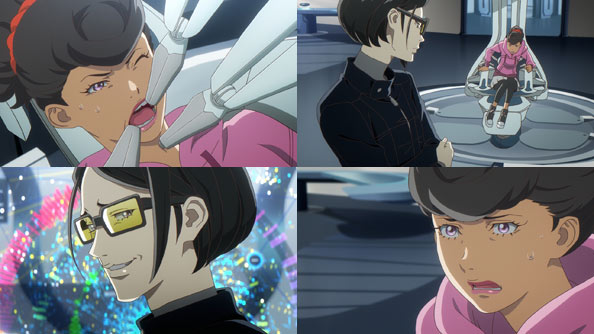 Back at Artience, the rocky road continues as Angela is subjected to a mechanical chair of torture as she sings scales for Tao to analyze. When she hits the chair in anger, Tao seems to have more compassion for the machinery than her, whom he calls “a bigger piece of junk than expected” under his breath but over enough for her to hear.

When she asks if he’s really human an AI, he replies that he gets that a lot, then gives her a bone-chilling smile that proves her point all the more. This is a dude who has been surrounded by technology, he’s basically lost the basic skills that make us a social species. At the same time, he’s not wrong that 99% of music is AI-generated and most people can’t tell the difference, so Angela is at a distinct disadvantage trying to force her way into the industry. 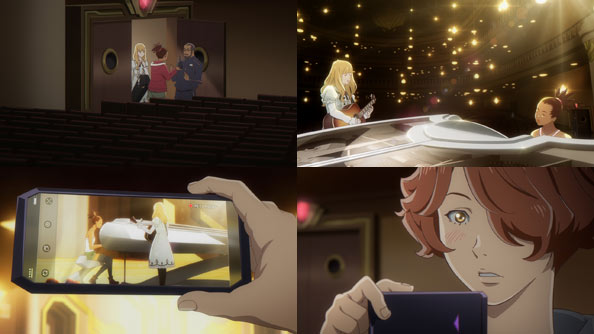 C&T arrive at the music hall, and when they’re turned away by an assistant, they barge in anyway, take the stage, tune up, and play their first song, “Lonliest Girl,” with full lyrics and much grander acoustics. It’s a lush, soul-stirring sequence, reminding me of the performances in Your Lie in April. The animation is G.O.R.G.E.O.U.S. Like the OP, it gave me goosebumps.

More importantly, it pretty much destroy’s Tao’s assertion about “the warmth of humanity” being a lie. Roddy records the guerrilla performance on his phone, basically falling in love with the duo in the process. Moments after they finish, security starts to chase them around the hall, and Roddy captures that too! None of Tao’s fancy AIs can hope to replicate the anarchy or spontaneity of two young women eager to make a name for themselves. 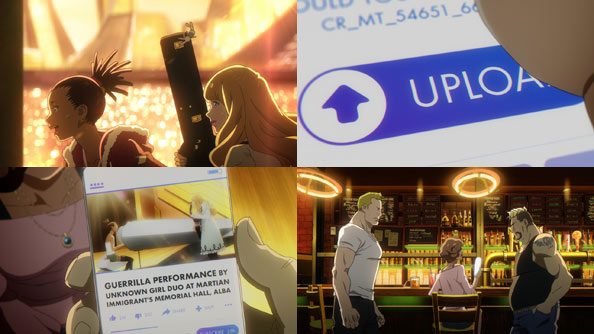 Running off once more, C&T have no idea what just happened, but are simply enjoying the adrenaline rush of getting in, playing on the big stage, getting out, and getting away with it. Roddy uploads the footage of them, and the video quickly goes viral, making me wonder when Tuesday’s brother will see it (because there’s no way she’s going to stay hidden from them for long).

Even the drunken ex-music producer hears it. He’s so drunk, he initially yells at the woman at the bar to shut it off, and very nearly gets into a fight with her man. But when he stops and listens some more, he’s absolutely smitten, and apologizes for his behavior before running off and getting his old friend Roddy on the horn. 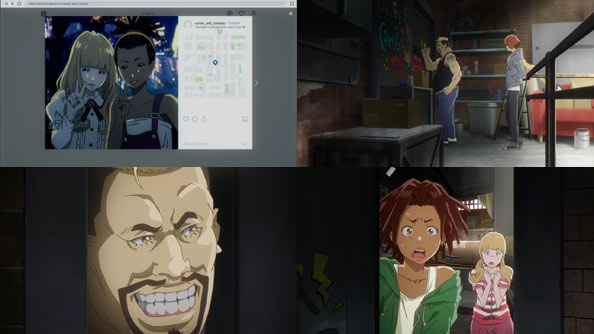 Through Roddy we learn this guy’s name is Gus, and he wants to know who those two girls were. Thankfully for him, Roddy has The Mad Internet Skillz, and in less than half a minute has not only found C&T’s Insta, but pinpointed their address as well, as the location data of their rooftop photo wasn’t hidden. Oops!

The next morning unfolds much like the previous one: Carole getting up and Tuesday…not. Carole punishes her laziness by placing guitar picks on her eyes, but before she can snap a funny photo Gus starts trying to knock her front door down, bellowing like a loon about the “gig being up” and ordering them to let him in.

Turns out this is yet more evidence that not everyone in this world knows how to properly express their intentions, as he ends up coming off as way more of a threat than a boon to the girls, who are scared out of their wits until he mentions he’s their new manager, and their fear instantly turns to bewilderment. And that’s how Carole & Tuesday were discovered! It happened pretty damn fast too, considering there’s twenty-two episodes remaining! This is going to be epic.