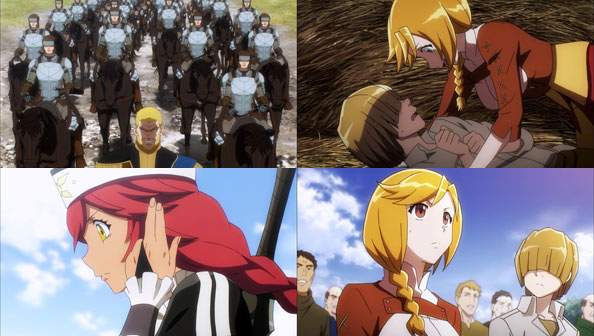 While his father sent him on an intel-gathering mission to Carne ostensibly to protect his heir, First Prince Barbro is determined to earn the throne through distinguishing deeds, not simply sit back and inherent it (also, he must suspect either the nobles or his siblings will ultimately plot against his succession once daddy’s dead).

This would be all well and good if Prince Barbro were good at anything. But reader: He is not. Scratch that: he’s good at making increasingly bad decisions and only quitting when it’s too late to save either his army or his own hide. And it didn’t have to be this way; had he negotiated peacefully with Carne rather than try to kill her, she wouldn’t have blown the little horn Lord Ains gifted to Enri. 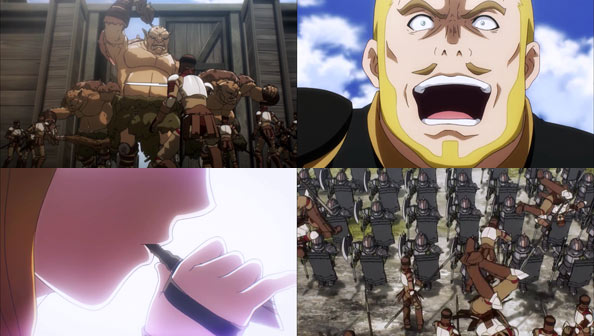 When Barbro’s troops reform after initially getting their clocks cleaned by Carne’s trained ogres, he forces Enri’s hand, and with no other options and Barbro’s horsemen nipping at the heels of the escaping children, Enri blows the horn, not quite knowing what it will do.

Well, the Horn of the Goblin General does no less than summon a massive, 5,000 strong goblin army, extremely well-equipped, well-trained, and unquestionably loyal to the person who blew the horn. We’re presented to wave after wave of (somewhat shoddy) CGI columns of all the various units kitted out in splendid battle attire. 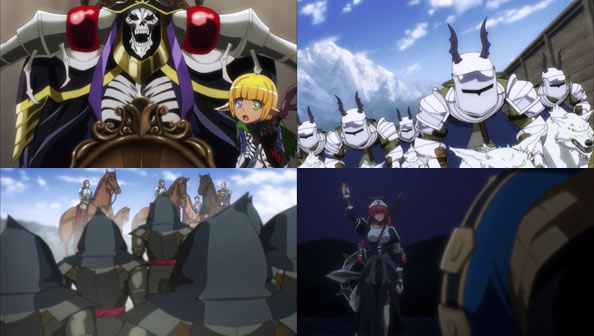 Even Momonga/Ains is caught off guard by this sudden development; he had assumed the horn would summon twenty decent goblins at best, but nothing like this. He deduces internally that the size and strength of the army must be determined by the individual blowing the horn; in this case Enri.  She already had the loyalty and love of her village and its goblin garrison; the horn thus conjured a suitably badass force.

Needless to say, Barbro’s forces are routed and thrown into retreat, though as I mentioned, the order to flee is given too late. Later that night we learn the truth of the matter: Beta “added her voice” to Enri’s horn blow, resulting in the overpowered goblin army (even she was surprised by how big it was).

She also nonchalantly (as befits one of the Seven Stars) breaks the bad news to Barbro that his existence isn’t part of Lord Ains’ plans, and so he and his entire force will be massacred forthwith.

So it’s R.I.P. Barbro–it’s probably better for the kingdom that he never ascended the throne–and all hail the Glorious Goblin General and victorious Chief of Carne Village, Enri Emmot. May she and Nphirea someday get to roll around in the hay without interruption from incompetent princes. 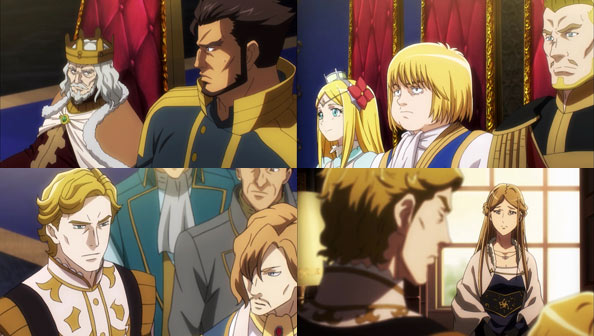 Emphasis on prelude: this episode is all kinds of setup with no real payoff; a calm of political wrangling in the Kingdom before the storm of war with the Empire. Chief Warrior Gazef Stronoff knows what Lord, er, Sorcerer King Gown is capable of and makes it known to his king, but at the same time knows the king could never heed his advice to simply give up land without a fight.

A fight there must be, even if it won’t be like the other wars with the empire, all of them relatively quick, clean, and predictable. In a compromise to the noble and, er, ignoble factions, King Ramposa names Marquis Raeven as the leader of the forces who will defend the kingdom. The ep injects a bit of humanity in the guy by showing how much he loves his son. Unfortunately, Princess Renner has only a moment of screen time and no spoken lines. 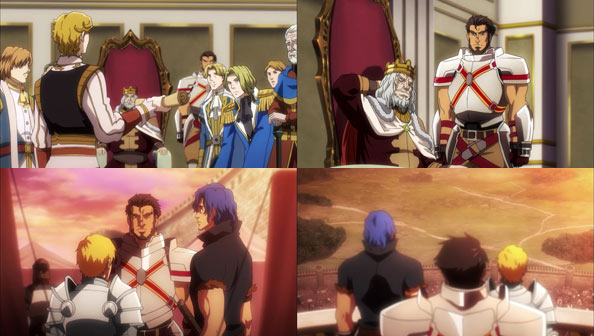 While Raeven will lead the fight, the kingdom is counting on two months of stalling before the fighting actually begins, so they can prepare as much as they can. Of course, with another noble estimating Gown himself is as powerful as 5,000 men (five times Gazef’s strength), they face a very uphill battle.

Gazef comes through as honorable and levelheaded as ever, and reunites with his pals Brain and Climb prior to the war. The three agree to meet at a place in the capital to eat, drink, and celebrate when the war is done, but Gazef also warns Brain that he’d better not face off against Gown, or it will be the end of him. 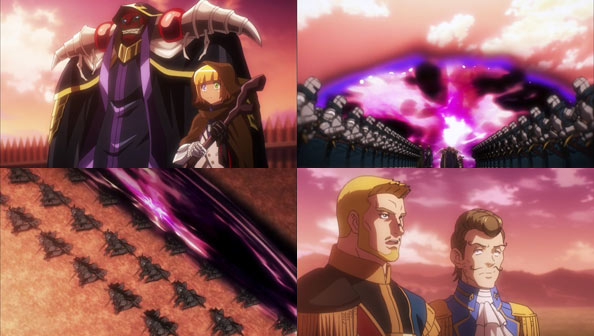 99% of the episode is from the perspective of the opponent Gown has chosen, as part of his (really Demiurge’s) larger plan to gain power and territory for Nazarick. The final 1%, in which Gown takes the field of battle, opens a gate, and unleashes and entire legion of death knights, only comes during the end credits.

King Ramposa’s eldest son and heir to the throne Prince Barbro, meanwhile, is sent to Carne to gather information, an errand he feels is both beneath him and meant to prevent him from achieving greatness, despite everyone’s insistence he’s the future king. But he should thank his lucky stars if he stays far, far away from the core of the battle in which Gown himself will take part; staying away means he’ll actually be alive to succeed his father. 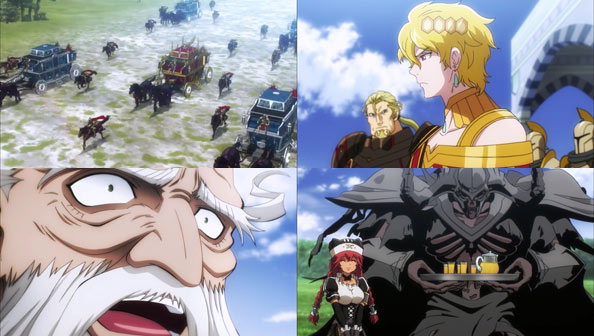 Faced with the overwhelming, terrible power of Aura and Mare, Emperor El Nix can hardly ignore a demand to travel to the Tomb of Nazarick to apologize personally. Though El Nix is such a busy man, the ensuing trip ends up being a rare opportunity for an afternoon nap, as well as a quick assessment of his potential queens, from Princess Renner (“praiseworthy but somewhat sickening”) to an “old hag that stays young with magic.” Ah, to be an emperor…

But once he and his retinue arrive, they are immediately reminded how much more powerful Ains Ooal Gown is than them, from the Maids who can control the weather (and whip up some top-notch Tang) to a healthy supply of Death Knights (who are relegated to serving said Tang). Nix’s Head Wizard Flugel is both terrified and amazed, almost to the point of rejuvination. His laugher is both out of sheer awe and wonder, but also kind of an “Oh shit, we’re so screwed.” 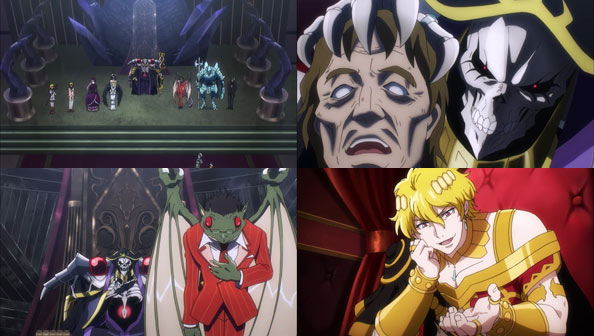 Once Nix & Co. are finally given an audience, things are actually quite cordial until Demiurge (in an animalistic disguise) talks out of turn, taking offense to Nix thinking he can use honorifics as if he was on equal terms with Lord Ains. Ains uses Demiurge’s little diplomatic snafu as an excuse to forgive the emperor for allowing his lord to send Workers into Nazarick.

This comes as great surprise to the young but cunning emperor, and uses that to suggest an alliance, in which Ains would start up and rule a country, and the empire would assist in any way they can. Ains agrees to this almost too easily for Nix to believe, but decides he’ll take every concession he can get, especially from a would-be foe he has absolutely no change against. 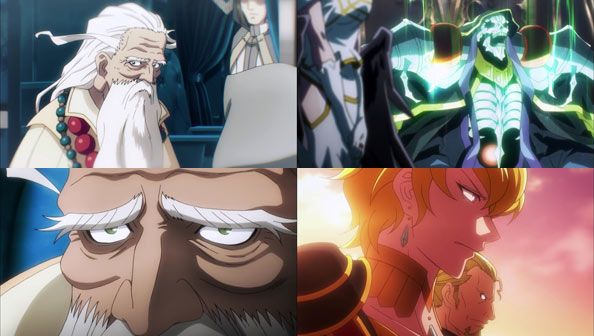 Once the two parties part ways, El Nix is confused by the ease with which his head wizard decides to jump into a coach and accompany him back to the capital. Nix knows Flugel well enough to know he wouldn’t be able to resist sticking around to try to acquire some of the immensely powerful magic he witnessed during their parlay.

And El Nix is exactly right: behind his back, Flugel has already met with “Momon” and agreed to give him “everything he has” in exchange for becoming the student of a tenth-tier “god.” Not sure he can truly rely on Flugel, El Nix plans to bring all of the human powers together in an alliance against Nazarick, all while pretending to be a friend to Nazarick.

Everything’s all going according to plan…only it’s Demiurge’s plan being carried out, not Ains. Ains actually doesn’t really know quite where Demiurge is going, and since he’s the boss, he can get away with ordering Demiurge to explain everything…for now. If I didn’t know better, I’d say Demi knew how ignorant Ains was to his plan, and was moving against him.

Of course, I know better…Demi would never move against his lord…or should I say, Sorcerer King—the winner in the throne room brainstorming session for a new title for Ains once he has his own country to rule.