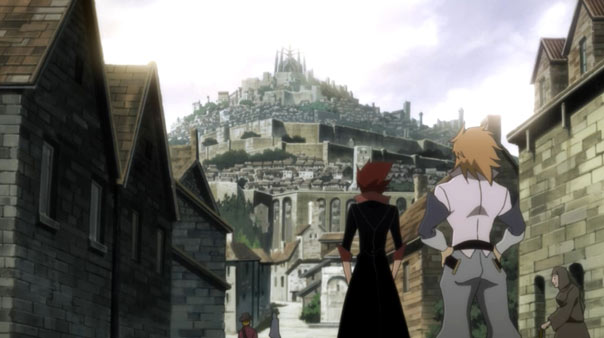 Santa Bard: where Leon was conceived in the flames that burned his mother to death. Where it all began. And also, where Mendoza is building a Demon Army with which to hold onto power. Leon and Herman arrive here far earlier than I would have thought, especially if this is just a 12 or 13-episode show..

This week, we get a parallel father-son story, though one that ends unhappily, as the city’s foremost swordssmith learns of his son Sergi’s death when his sword is returned to him. Only the sword isn’t just a sword, but a vessel for his dead son’s soul, no doubt twisted into horrordom by his experiences in the shadowy Knighthood of the Black.

Herman wants to get the lay of the land — preferably by getting laid — and it doesn’t even take long for the comely Leon to get surrounded by ladies, one of them Emma, who is still following them. Considering those ladies may have been trying to roll him, her presence was beneficial, and she gives the quick-to-anger Leon some free advice: quick getting all bent out of shape by every little thing and grow up.

He does just that by paying for the food a young urchin stole from a merchant, catching the attention of Julio, who was once an urchin himself, and was saved by his adoptive father and boss: the swordsmith with the demon possession problem.

The two father-son duos enjoy a meal together, which turns out to be a perfect opportunity for Herman and Leon to pick up on the fact that something is very wrong with Julio’s dad.

Of nights, he takes a terrifying Horror form and goes after Santa Bard soldiers who won’t tell him where his son is. His possession by Sergi’s sword was, in a way, a result of him not being able to let go of Sergi and let him move on. Although, from the image up top, it’s not as if the guy had a lot of choice in the matter. 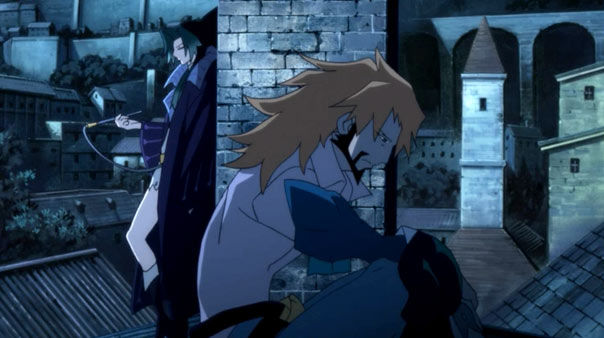 Herman dons his Zoro armor and does his thing, father v. father, Herman’s killing of the Horor means Julio is an orphan again, but he’s an orphan in the city’s top smithy and still has a decent support system. He’s in a place where he can determine his future with his own hands, which is basically a more literal version of Leon’s situation. 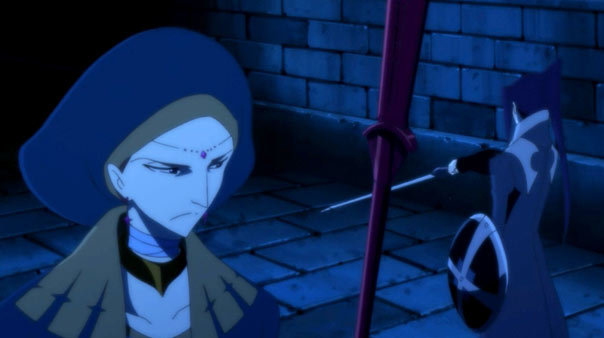 But the smith-horror was just a glorified side-quest, considering what the Knighthood is up to, which Herman and Emma confer about. Mendoza is also aware of their presence, and one of his loyal associates vows to deal with them (though Mendoza doesn’t seem to care either way).