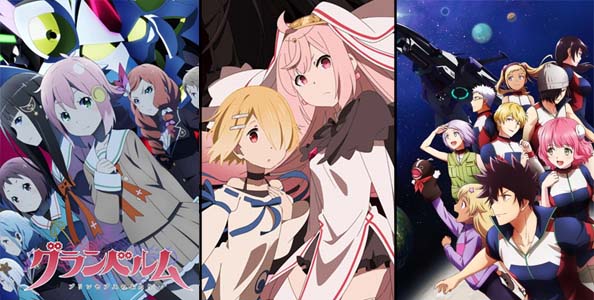 Granbelm – A kind girl stumbles into a magic girl battle royale with super deformed style Gundam. The art style is visually striking and the action is top shelf’ish. Too bad Granbleh’s kitchen sink of tropes is delivered in such a loveless and generic way. 7

Maou-sama, Retry! – A game developer is sucked into the fantasy MMO he created in the moments before the servers go dark! Now he is a super powerful demon lord and looks like a yakuza! Zap! Loli! Art with zero style and story without originality or substance! 5

Kanata no Astra – Space High schoolers get lost in space; must show grit (and team work) to overcome crisis. Crisp animation and competent narrative construction save it from an underwhelming cast and middle shelf art style. If a kid dies next week, my opinion will move higher. 8 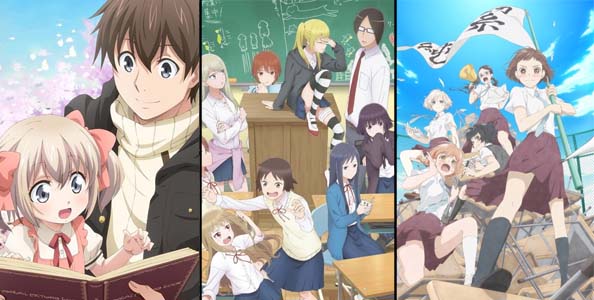 UchiMusume – A young adventurer adopts an orphaned demon girl he finds in the woods. There’s a potty joke! It’s charming but very safe and gives all the hints that it wont go anywhere by the end of the season. 8

Joshikousei no Mudazukai – A girl realizes she picked an all girls high school and she just. can’t. even. The comedic timing is on the money… but humor kinda whiffs? Mid shelf artwork makes it watchable but not remarkable. 7

Araburu Kisetsu no Otome – The literature club tackles sex in literature… AND LIFE! Reading train schedules and draping penises on girls’ heads play out in this earnest, bashful, slow burn. Looks to be Summer’s sleeper hit. 9!

Dumbbell Nan Kilo Moteru? – A high school girl gains weight for comedy. Goes to gym for comedy. I got bored and stopped watching. 6

Tejina-senpai – A boy must choose a school club and meets a girl into magic. 12 minutes of humorless antics ensue. #Skippable 5

Enen no Shouboutai – A boy with a tragic past starts his first day as a Magic Firemen fighting demoney fire people. There’s a churchy vibe and Soul Eater art style. The animated fire is fantastic but the production costs must have been too much for the studio. (scenes linger) Worth a watch though. 8

Dr. Stone – Suddenly everyone turns to stone. 3,700 years later, two teens break out and start to figure out the stone-age world around them. With style so jarringly OTT my brain can’t tell if I love it or hate it, and a narrative construction so bat shit crazy I have to keep watching. 8 #WTFFTW 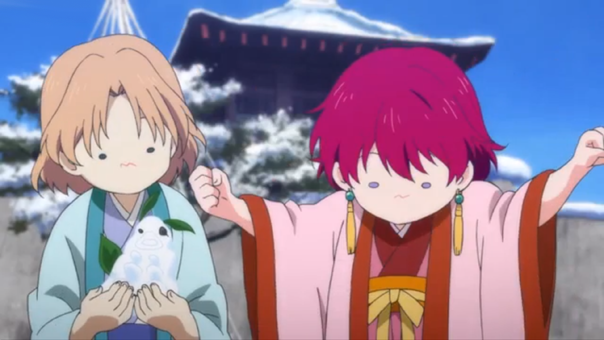 This week’s episode of “I don’t know why half of you love this show so much” Akatsuki no Yona consists of two flashbacks that establish Huk’s earlier interactions with Yona and Soo-Won, and one current event scene where a broken Huk repeatedly saves Yona from attacking wildlife.

Until proven otherwise, I’m just going to keep noting that Yona is pretty much terrible. Well, not terrible, per se. It’s just remarkably average and this episode’s constant clash of silly kiddy moments was totally dissonant. 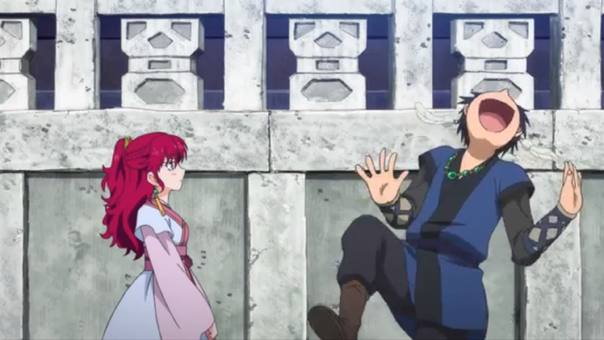 I get it! The happy childhood these characters shared was so happy and carefree that Soo-won’s mega betrayal’s destruction of Yona’s will to live is understandable. But maybe that would have been more compelling if the flashbacks were shot from Yona’s perspective?

Because Huk’s memories of Yona still paint her as a spoiled, weak willed brat, even though he loves her!

However, it’s more interesting to look at this episode as a dedication to each of these three children’s fathers, and less about them. In this case, Huk’s perspective is probably necessary, because Yona is too much of a dull-whit to notice all but the most obvious contexts for each man.

About all I can give a thumbs-up to here was each father’s visit to their sickened child. Huk’s adopted father (and general of the clan) is brash but ultimately there for chuckles and clearly loves his grandson; Soo-Won’s father is clearly an unstable psychopath, and he treats Soo-won more like a valued possession than a person, and the King doesn’t visit Yona until later that night — but he loves her so much he makes her a soup! (and he does a terrible job at it.)

Ignoring all this happy context, which in many ways would have made a more interesting show than the one we are watching, Yona snaps back into the present. There the princess takes a bath but gets covered in leeches, and is saved by Huk. Then she wanders off into the woods looking for her hair pin and is…uh…ambushed by a pack of snakes…then she’s saved by Huk again, and I’m just confused…
…Why is NATURE attacking Yona now? Whatevs…

I took my second outing with Akatsuki no Yona this week and I will gladly admit it fared much better than my last. Given episode 2’s greater emphasis on backstory building and action over spoiled princess love monologues, this should be surprising though.

Still, Princess Yona deserves some credit here. Her show has clawed its way to something better than complete mediocrity and, based on it’s closing scene, looks like it will continue to climb slowly to a natural plateau of just-barely-watchable standards.

In a nutshell, Soo-Won’s betrayal last week was to avenge his father, who King Il had killed back in the fog of Soo-Won’s childhood. Whether or not King Il did, in fact kill his brother, and whatever his motives may have been if he did, Soo-Won is not entirely a reliable narrator here. (nor are his allies, who may have provided him with bad intel and come off as classic bad guys)

Regardless, it’s a mystery that I’m sure will tragically unfold over the next ten episodes — and it’s honestly an adequate one too — I just don’t have it in me to care for adequate this season.

Again, as we’d already seen last week, Huk shows up, saves the princess and gets filled in on the details. Then a servant sacrifices himself so the good guys can get away. Then we flash forward to the future of the present day that opened the first episode.

AnY’s story is remarkably slow, methodical in its goal to leave no question about it’s very simple events for the viewer, and repetitive. If not for the action sequences, which were nothing remarkable, watching this episode would have been terrible.

Akatsuki no Yona is the soppy-but-one-day-strong princess Yin to Seven Deadly Sins’ obnoxious hero protecting a princess Yang. The yin is melodramatic high school filler with a degree more realism and grounded sense of style. The yang is an empty middle school romp through boobies and over the top style and fantasy setting.

Both shows feature a quest to gather a group of great warriors to aide the princess in her time of need. Neither is especially mature or technically complex in how it’s going about it. Neither is, at all nor in any way, worth watching this season, nor at any time unless you are under the age of 17. 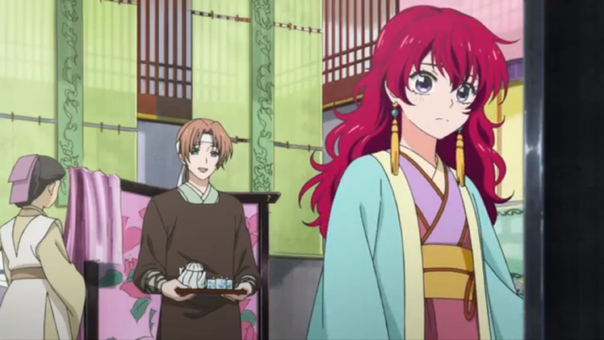 There’s no nice way to say this but Akatsuki no Yona has no place being released during such a hot season. It’s very average looking, featuring dull character designs with ‘cheats’ like putting many characters in robes, which means they don’t have to have legs or feet or, really, a walk cycle in the first place.

It’s not ugly per-see, but it just feels strained. Cheap. Uninspired. That’s just not gonna cut it with Vanadis and Bahamut around. Even Nanatsu no Taizai had more enthusiasm than this — more personality too!

Akatsuki no Yona is a by-the-numbers tragic tale of betrayal and features a spoiled princess as it’s central character. In fact, Princess Yona gets so much screen time pining for her big-brother-like childhood friend Soo-Won that, when he finally kills her father, I was on his side! 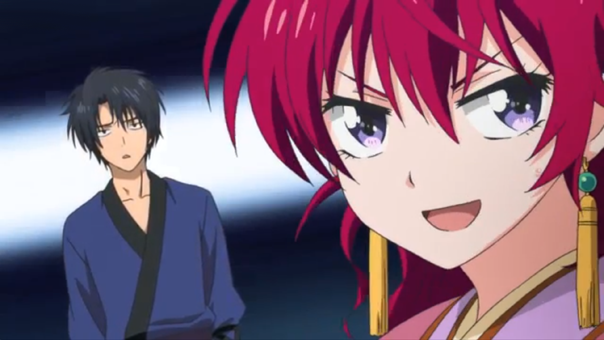 The princess is simply unlikable from the start, which makes it very difficult to empathize with her after her world turns upside down. If anything, I care about antagonist Soo-Won more. He seems to actually care about her and be conflicted about her unfortunate fate during all of this. 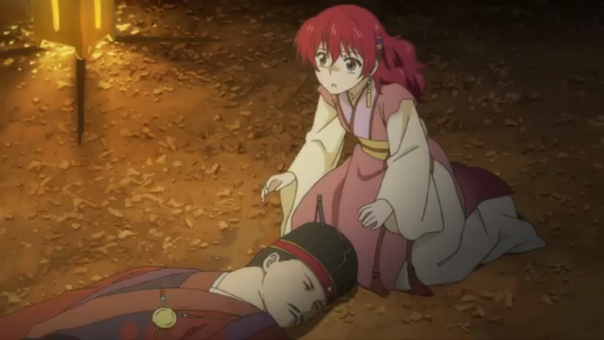 Even in a slower season of anime, this would be pretty low on our radar. In such a clustered season? I already have Cross-Ange for my tragic sheltered princess genre, thank you.