The charming romantic comedy is wisely tabled this week as Rin, Shirou, and Lancer get right down to business facing off against Caster, Kuzuki, and Archer, respectively. And like the Clippers-Spurs first round finale, despite one side’s shortcomings it looks like anyone’s game. 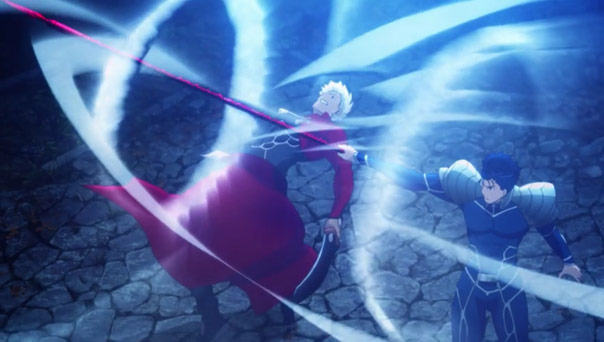 Of course, before the battle begins, Caster makes sure to get in plenty of trash talk directed at the “little girl” AKA Rin, while Archer makes a point to try to anger Lancer into slipping up by insulting his temporary ally. 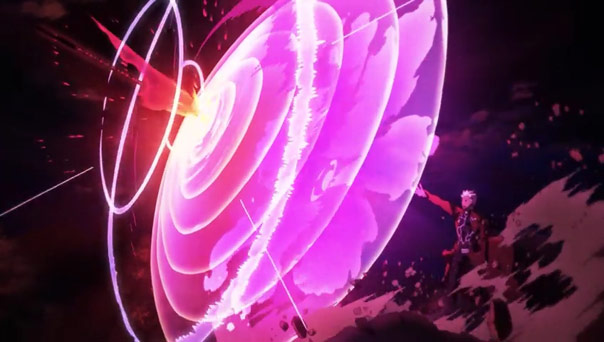 Lancer is pissed off enough to launch his special attack, Gae Bolg, straight at Archer, who tries and fails to block it with the multilayer Rho Aias. The resulting explosion seems to do Archer in, though he actually survives, he mentions the ever-watching eye of Caster is no longer upon them. Lancer withdraws, leaving Archer alone do do what he will. 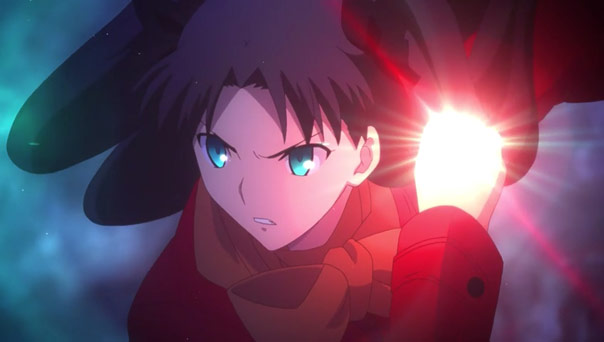 Caster is busy with Rin, who puts up a surprisingly good fight with magic before having to pull out her trump card – hand-to-hand combat using her magically-fortified arms and legs. Along with Shirou getting tossed back again and again by Kuzuki, and Kuzuki quickly intervening when Rin starts beating the crap out of Caster, our lovebirds definitely seem to be in over their heads, especially when Caster still has Saber in the chamber.

Then we hear “Trace on,” not from Shirou. but from Archer, and numerous summoned swords are driven into Caster’s chest, defeating her once and for all. Kuzuki embraces her at the end, whereupon she tells him her wish was being fulfilled all along, likely by having such a great and loyal Master. True to his word, he keeps fighting Archer even after his Servant has gone, but doesn’t last long.

So yeah, Go Archer, saving the day at the last minute with his “Trojan Horse” act. But hold on; Archer still hates Shirou and wants to kill him, and Rin no longer has any control over him. No one has any control over him, making him essentially the New Caster. One wonders how he can operate this way without any Master, but the fact he said “trace on” is certainly a hint.

Unlike Ilya and Berserker’s epic struggle and defeat, Caster and Kuzuki fall with comparatively little fuss, and their roles as impediments to Shirou and Rin are over, giving way to Rouge Archer. This was one of those two-part eps where I enjoyed the quieter “rest” episode more than the action-packed “release.”

Of course, Saber is now free of Caster, and from all appearances seems as devoted to Shirou’s protection as ever, so unless she has a debilitating weakness of some kind, Archer should have his work cut out for him.