With Altair, well, not defeated per say, but ceasing to be a threat to the world last week, Re:Creators can relax and do a leisurely victory lap. The five creators remaining on the battlefield accept their supporting roles in a story that ended up being primarily about Altair and Setsuna. The other creators congratulate Souta for his achievement, even if, especially for Matsubara and Takarada, it hurts that their heroines had to die in order to win.

But Meteora steps in to assure Matsubara that only one possible Selesia’s story ended there; there are countless others that remain alive, and more still as long as he’s committed to keep adding to her world…coffee, for instance. 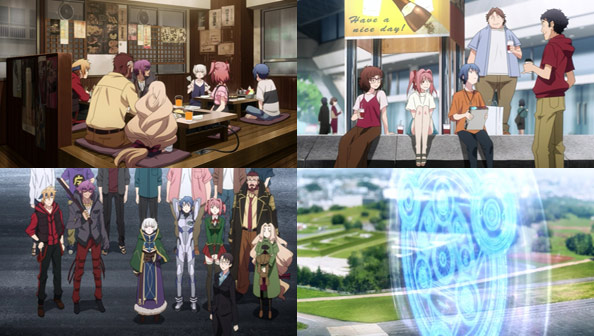 After a celebratory feast at a down-home restaurant, Meteora also points out to the other creations that they will all have to return to their respective worlds soon, as her magic will eventually cease to work as the world restores its proper order (an order in which her magic doesn’t exist).

One by one, the Creations say their final goodbyes and walk through the gate, disappearing from the world in physical form but not in the hearts and minds of their creators and fans. I was kinda wondering where Magane was in all of this, and I really wish we’d been able to see more of her…did she de-coalesce off-camera after using her ability to help Souta?

In any case, Meteora has one more plot twist in store: she’s staying. I mean, even if she wanted to go back, she can’t go through a gate she is keeping open any more than she can pick up and throw herself. But she loves this world, and has always seemed quite comfortable here. So while she loses the rest of her magic as soon as the gate closes, I have no doubt someone as strong and brilliant and charming as she will land on her feet. 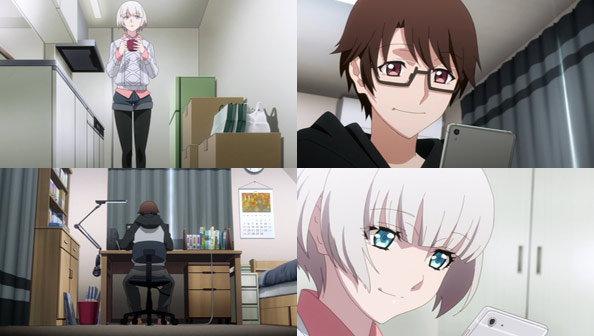 A bit of time passes, marked by the emergence of several new advertisements around the city promoting new seasons of the creators’ creations, each with new stories that reflect their experiences during the Chamber Festival: Shou and Yuuya fighting side by side, Blitz with his daughter by his; Hikayu’s new martial-arts master alter-ego; Magical Slayer Mamika meeting Aliceteria.

Everyone continues to create. Whatever problems people had with the story of the Chamber Festival (and it did kinda go all over the place, if we’re honest), creators can’t look up to a standard they worry they’ll never approach; they can only keep moving forward, and keep creating. That’s the surest way to achieving happiness not just for themselves and those who consume their work, but for their creations too.

I’m also heartened to see Souta and Meteora exchanging texts in much the same way Souta used to do with Setsuna, only now he’s a little older, a lot wiser, and more importantly, confident enough in his ability as a creator in his own right, to be anything but proud and supportive of his friend’s efforts.

Meteora has pivoted to creation herself, and has decided to name her first work Re:CREATORS—the very work we just spent 22-plus weeks watching.