Itami’s run-in with the Rose Knight Order turned out to be one big misunderstanding, and Pina is furious enough to throw a metal cup at her subordinate’s head, which isn’t that extreme a reaction considering she now fears the treaty is over and the SDF is going to destroy the empire. She doesn’t know yet that that’s not how Itami or the SDF really rolls.

With some heretofore unseen sleeping spell powers of Tuka Luna, Recon Team 3 re-infiltrates Italica, as their CO is gently nursed by no less than five maids, including a catgirl, a bunnygirl, and a medusa. The cut from these characters, who wouldn’t look out of place in a maid cafe, to the SDF soldiers who barge in fearing the worst, is admittedly a pretty funny sight. 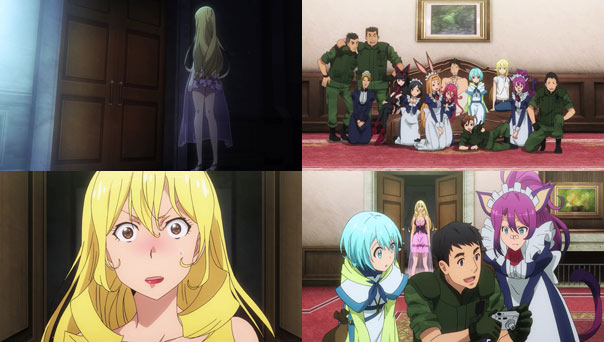 The fact that Itami’s beating at the hands of the Rose Knights isn’t that big of a deal—but various parties still consider it as such—is drilled home to an extreme degree when Pina essentially orders blondie to “use her body” to make Itami forget anything bad ever happened to him. Replace the pain with pleasure, and all that.

The blonde, being of high breeding, admits she’s been trained to perform such duties, and is steeling herself up to meet Itami in his bedroom (wearing a sheer nightie), only to find Itami’s maids and the SDF posing for digital photos.

The blonde is insulted when Itami doesn’t notice her entering and seems to be ignoring her, so she slaps him, but again, she’s lucky Itami’s such an easygoing laid-back guy despite, to Kurebayashi’s shock, the fact he’s a certified ranger, i.e. a badass warrior.

Yet perhaps it’s because Itami has undergone/endured such vigorous training to become a ranger that the beatings aren’t that big a deal to him. Pina gets to accompany Recon 3 to their base, along with Blondie, where the two formally apologize to the general, with Lelei interpreting all day and getting so tuckered out Itami has to put her to bed, which is a cute but dubiously necessary scene. 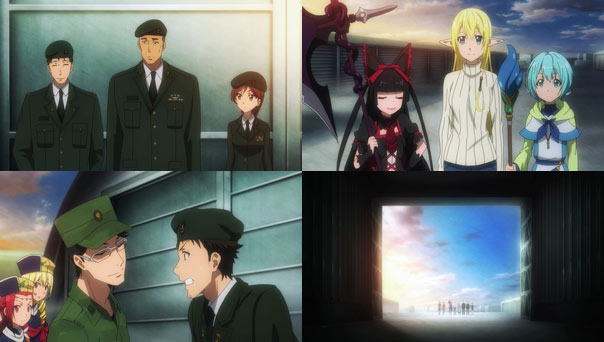 The next morning, Itami, Kurebayashi & Co. are kitted out in their dress uniforms in preparation to meet with the Diet in Japan. Not only are Lelei, Tuka Luna, and Rory coming along, but Pina and Blondie too (she didn’t make enough of an impact for me to remember her name, sorry :P).

And while seeing the special region people we’ve come to know setting foot in Japan is sure to be a momentous occasion (and a lot of fun to boot), we have to wait until next week to actually see it. This week, rather than fight, the JSDF kinda shifted around from place to place as Pina failed to control her violent subordinate.

Pina Co Lada’s forces are being massacred by the more numerous and experience (and bloodthirsty) brigands, and all the death is arousing Rory, until she can’t take it anymore and rushes towards the east gate. We see just how much you don’t want to mess with her when her blood’s up.

Rory as a concept remains a bit silly in an otherwise straightforward low fantasy setting, but not nearly as silly as what GATE pulls when it’s time to call in the SDF cavalry…or to be more precise, the air cav. 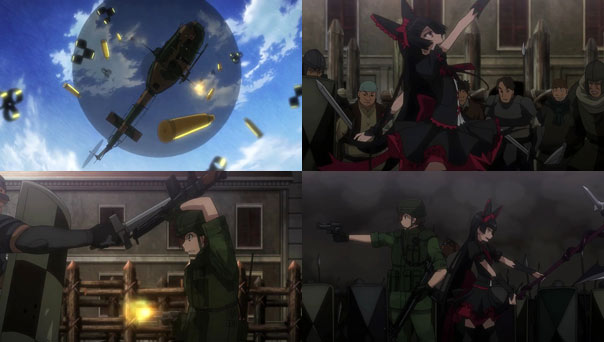 I’ve always had conflicted feelings about the “Ride of the Valkyries” Helicopter Attack scene in Apocalypse Now, which I think is the point. On the one hand…America, Fuck Yeah! On the other hand…Why the fuck are we in Vietnam indiscriminately slaughtering random villages?

There’s a different kind of conflict in GATE’s homage to that scene because it so thoroughly, accurately lifts entire shots, music, and dialogue from that scene, it’s really less of an homage and more of, well, a knockoff. Which, I’ll be honest, was a little lame. 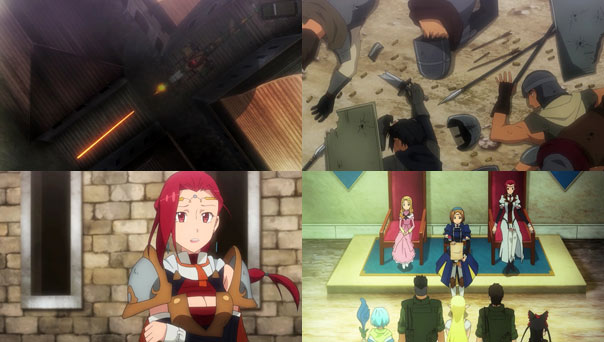 The situations in both works are the same: a overwhelmingly superior force eviscerates a pitifully under-equipped enemy. But Apocalypse Now did it first, did it better, and did it in a way that I really didn’t need to see so shamelessly copied. 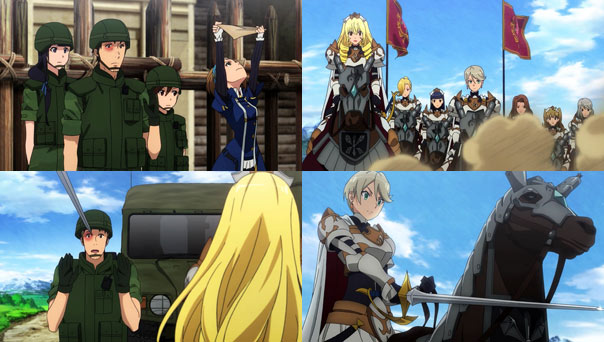 In any case, the battle itself, and the parts that aren’t ripped from AN, work well enough. Watching Kurebayashi pair up with Rory and go Medieval on some folks was pretty fun to watch too, even if I’m a bit dubious about the efficacy of rushing in and fighting at close range when there’s plenty of long-range weaponry to defeat the enemy from a safe distance.

Then there’s Itami taking all female prisoners (coincidence, eh?), and when Pina’s comrades in the Rose Knight Order intercept his convoy, he sends his team back to base, making himself the prisoner of two very tough, very beautiful “chicks.” These get Itami back to his roots as an otaku looking to meet all the exotic characters he can…but you’d think all the vicious slaughter they just carried out would be a little more sobering. 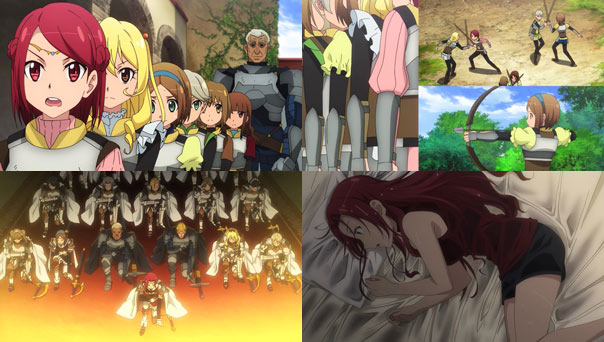 This week, we learn that Princess Pina Co Lada’s Rose Knight Order was something she herself created in her youth out of a desire to be a knight and a hero to her people. She gathered other children of the court, mostly girls, and with the help of her knight and protector Grey, whipped them into shape. Seven years later, the order was officially established, but only as a ceremonial honor guard, to Pina’s consternation.

But with so much of the conventional military lost to the JSDF, Pina’s father finally deployed her unit. But her first battle, defending Italica from hordes of bandits (made up of former allied soldiers who fled the JSDF slaughter), doesn’t go so well, as most of the bravest and most skilled town conscripts are killed, leaving her handful of trained knights and a bunch of scared townsfolk. I’d want to stay in my dreams too, as she tries to do until doused with water by the maid.

She awakes to learn that some people have arrived. She knows not whether they’re friend or foe, but once she gets a look at them, assumes any force with Rory Mercury on their side would have already taken the city, and let them in. Her first interaction with Lt. Itami is slamming the doors of the gate right in his face, but things improve a bit from there, as Pina can’t afford to turn down help in defending the city.

While Pina may not know it, she and Itami are of like mind: protecting the people is the primary concern, even if the JSDF recently killed thousands of her father’s soldiers. Itami defers to Pina’s command, and she places him and his men at the South gate to serve as decoys, where they proceed to simply stand around, waiting for the enemy to return.

When the battle begins at 3 in the morning, the enemy attacks the East gate, not the South, and the gate falls almost immediately due to their superior numbers, tactics, and a “spirit wielder” on their side deflecting arrows. Pina looks upon the besieged walls as they breach and the bandits pour in with a stunned look on her face, trembling in fear.

It turns out Pina is a lot more green than I’d originally thought. In honorable one-on-one combat I’m sure she’d do quite well, but this is war, something she’s never experienced, and when her carefully-laid plans go awry, she stands frozen, like an honor guard, with the only force that can turn this around all the way on the other side of the city. I’d call for them if I were her.