In preparation for the next NGNL, I reassessed my perceptions of the show by watching a couple of episodes of SKET Dance. That’s not meant as an affront; SKET Dance is one of my favorite comedies, because when it was on, it was really ON, even if it wasn’t necessarily doing comedy that week. SKET and NGNL are alike in possessing vast stores of thematic material to draw upon, their ability to cultivate the belief that in any given episode, anything could happen, and that they’re not afraid to get really silly.

This week, pretty much everything does happen, as the Flugel Jibril agrees to wager not just her library, but literally “everything she has”, so confident is she that she’ll win. If she wins, she gets an iPad containing 40,000 e-books’ worth of knowledge from another world. The game she picks is a kind of Shiritori not possible in our world: “Materialization Shiritori”, in which every word spoken affects their environs. This is a very cool concept with near-limitless potential.

With such a wide-reaching game, one would expect things to go off the rails pretty soon. They do, when the first word Sora utters is “hydrogen bomb.” If he can kill Jibril before she can respond, he wins, even if he dies. Yes, this means when the game ends everything that happens is reset, but this is one of those rare instances where that knowledge doesn’t lessen the peril or suspense in the slightest. After all, Sora and Shiro are risking their iPad; the only iPad extant in Disboard! (I’ll set aside the matter of how they’re charging it). 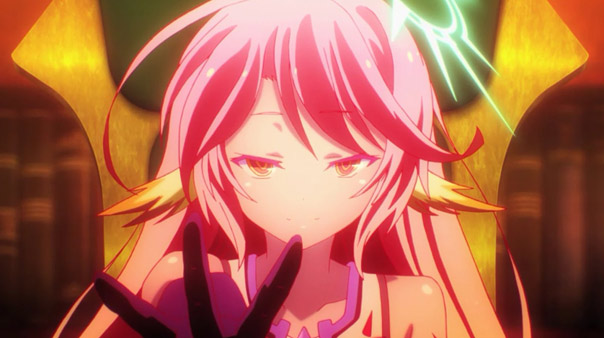 After that H-bomb, the competition remains fierce, and the words are exchanged at a fine quick pace, interspersed with a back-and-forth regarding Jibril’s unapologetic arrogance. As a Level 6 Exceed, she’s used to looking down on Imanity as ants, which is why she’s so convinced she’ll emerge victorious. But inspecting Sora’s erogenous zone (his armpit) should have tipped her off: she’s not dealing with run-of-the-mill humans. 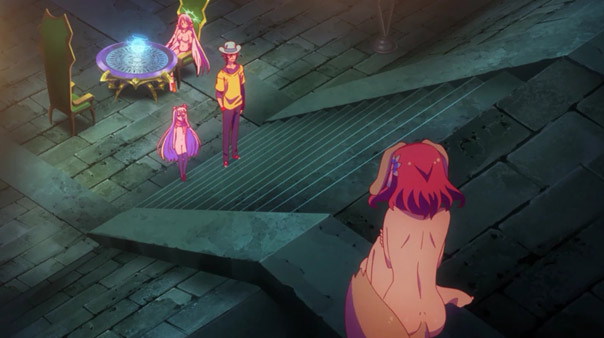 Much of the game is also played with Jibril, Dora, and Shiro relieved of their clothing thanks to Sora, but because their privates are gone thanks to another word he used previously, it’s a PG-Rated affair. What makes this kind of Shiritori so devilishly awesome is that the players must keep track of every word not just so they won’t repeat it, but to keep track of what’s gone and what isn’t. This results in Sora vanishing away the Mantle, Crust, and Lithosphere from the planet. 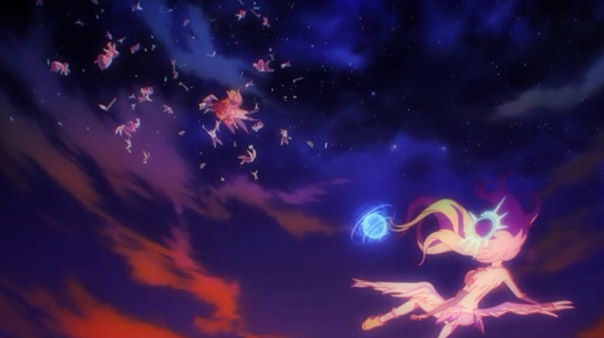 Things escalate from there into a war of attrition with various gasses being removed, along with the ability to speak. The back and forth reaches an apex when Jibril throws the term Sora used to describe her—”Empty-headed Academic”—back in his face (writing in the air) as a coup-de-grace. But Sora was counting on that, and already has his pre-written, decisive response: Coulomb’s Force, the removal of which causes a hypernova.

What had started with the vanishing of some candles and the ladies’ clothes ended up with the rearrangement of the cosmos. Back in the library they’ve won, Jibril graciously concedes defeat. When Sora allows her access to the iPad and library anyway, she admits she’s finally found someone worthy to serve as her master; someone who can overturn everything she knows. And since Jibril knows pretty much everything, that’s saying something!