Setting the final episode on the seniors’ final day of high school is an obvious touch, but a very effective one here on Just Because!. We can share that sense of accomplishment, relief, and anxiety the new grads are going through. There’s also the sense that everyone feels a bit out of place, from little details like flowers and parents to a completely different schedule of events from the usual routine.

Rather than pad it out, JB! does a curtain roll of everything and everyone else, starting with the news that Izumi didn’t get into the fancy college he thinks Natsume is going to. She only texts him that she got in “her first choice”, without indicating that she changed it to his.

That profound misunderstanding threatened to mar all of the events in the episode that weren’t dedicated to resolving it, but it turned out to be an episode that rewarded patience. We also get an arguably superior scene to the episode’s final moments in Izumi and Komiya’s last scene together.

She won and lost the competition: lost because her photo of him didn’t win, but won because her fellow club member’s photo of her taking a picture of Izumi did win, which means the club, and her place of belonging survives. It’s little consolation for Izumi’s formal rejection, however, and both animators and seiyu LYNN really knock it out of the park with Komiya’s understandable reaction.

Speaking of dingers, we get a nice symmetry to the series when Izumi and Souma play ball in the yard again, only this time with their positions reversed. When Souma hands him the bat and says “hit a home run”, Izumi knows what he’s talking about, because of what hitting one meant for Souma.

That being said, Souma’s fiert first pitch immediately lets Izumi know he’s not lobbing a batting practice toss…Izumi has to earn his homer—and he does, making crisp contact that sends the ball flying, just as a jetliner screams overhead, the vapor trail imitating the ball’s path, making the homer seem that much more epic. Izumi runs off to Natsume. 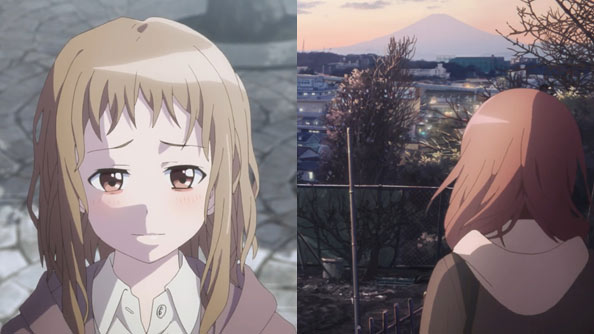 Unfortunately, Natsume doesn’t wait on the hill long, as she assumes that Izumi won’t come, and a phone call from Yuriko and her celebrating friends lures her away before Izumi can get to the rendezvous point.

So that’s kinda that…and an entire month passes, without them speaking or even texting each other. To this, all I can say is, WTF, show? A month? Seriously? A longer period of time apart than the two have ever suffered, at so crucial a time in their lives? I’m not a fan of the choice, or the persistent lack of communication that caused it. 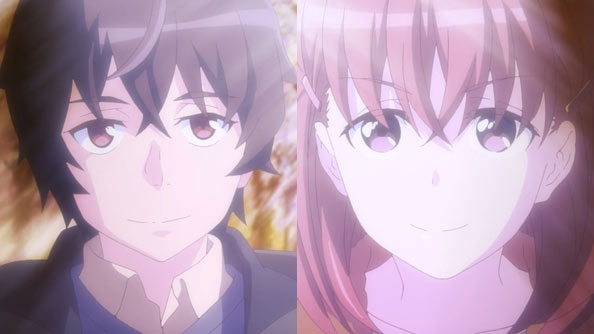 That being said, their encounter at college, in which both un-bottle that month of longing with quick confessions to one another, was very well done. Not as nice as Komiya’s scene, but still nice.

Some shows are about what happens after two people who really had to labor to end up with each other enter a romantic relationship, but this was just about how it happened. I’m always for at least a taste of seeing the new couple fall into a new rhythm together, but we didn’t get that here.

Oh well, what we did get was most enjoyable regardless. Just Because! is no Tsuki ga Kirei, but there were certainly moments when it came close.