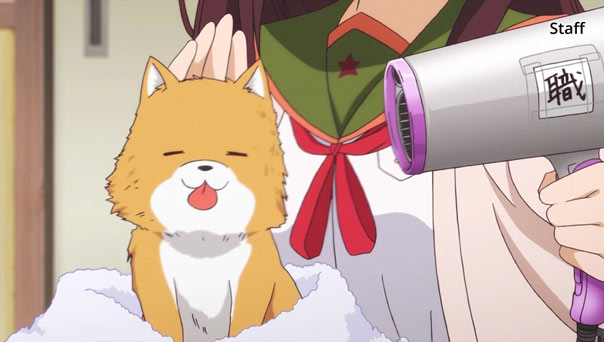 No Kamo no Chomei recitations this week; rather, we have an algae-covered Yuki and Taroumaru, resulting in the need for baths for both. But I must admit this episode, despite its ample charming slice-of-life and revelatory ending, had neither the drive nor the punch, nor the resonance of previous episodes. For the first time, GG! felt like it was, if not stalling, at least dawdling. 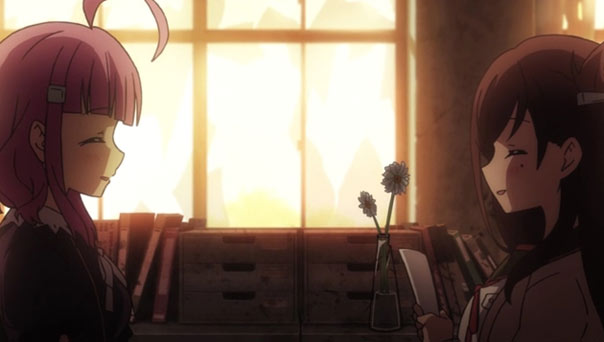 The totem connecting the recent past to the present is a Polaroid camera, a pre-digital mechanism capable of producing instant images of the moment the shutter click captures. Moments that no longer exist, like those with Megu-nee. While searching the faculty lounge for the lock the mystery key fits, Yuuri recalls the day both she and Megumi came up with the whole idea of the School Life Club in order to break up the monotony of simple survival. 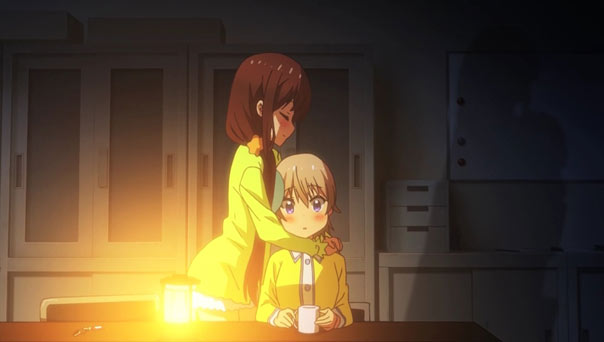 But the very ease of their survival thus far has created a kernel of doubt and suspicion, not only in Rii-san, but Miki as well: both believe the school to be almost too well-equipped for long-term survival, which is why Rii-san wants to find out what the key unlocks so badly. It just takes a bit of aforementioned dawdling on the part of Yuki and the dog to get to this plot-propelling point. 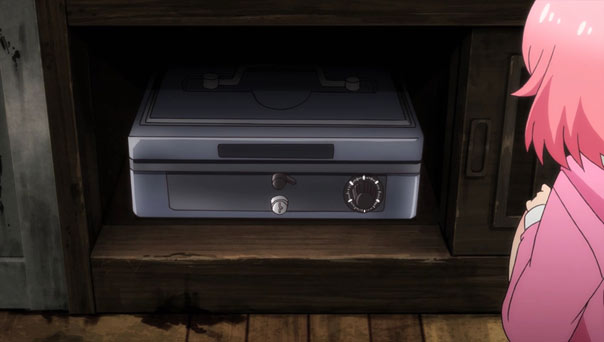 But it’s Yuki, the delusional one, who ends up finding the secret compartment where the safe that the key belongs to is located. Yet Yuki isn’t made privy to said contents: a DVD and documents relating to the effects of a biological weapon, contamination, and isolation, all but assuring that the present zombified state of the country and possibly the world is a man-made occurrence.

On the one hand, the revelation of these documents takes us deeper down the rabbit hole. On the other hand, some of the mystery has been eroded, leaving us with facts that may or may not provide ample recompense for what had been an immersive mystique. In so much fiction, sometimes the more you learn about something, the less you end up caring about it. Some things are better left unknown. It remains to be seen if this is one of them.

In the next four episodes, will anything come of Yuuri, Miki, and Kurumi learning more about what happened? Will they be able to use this information to enact significant change in the present state of the world? Or has their fate already been sealed, in which case they may have been better off in La-La Land with Yuki? 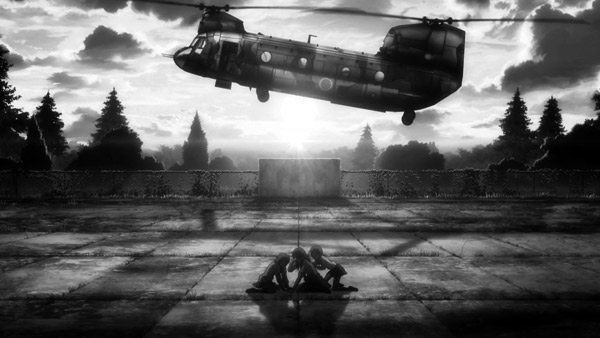 Ibara, Taeko, Aoi, and Shiba chase the stealth bomber(!) in a rundown jeep(!). It attacks them with missiles and machine gun fire(!), but Ibara finds a soft spot in its radar(?) and brings the plane down with an RPG. It lands in a lake where the girls discover the Yellowcake Corp. is dumping foreign nations’ nuclear waste. Shiba, who they left behind due to the radiation, wanders to a shrine and takes off his mask(!), but Ibara finds him, shoots him with aether(?) and is able to get him to the helicopter in ten minutes to get another dose in him to stop him from dying(??). He gives the girls of all the survivors still in the city.

Sorry for the snarky punctuation above, but  wow, that was a lot of crazy, ridiculous stuff going down in one episode! And yet it still lagged. Let’s start with the frigging stealth bomber chase, shall we? The 1997 flyaway cost of a B-2 Spirit was $737 million, and it’s cruising speed is 560mph. Yet this episode would have you believe that while it’s flying in the sky, someone in a rickety old jeep (top speed on a road not littered with debris? ~80-90mph) could take it out with a properly-placed missile. It also wants you to believe that it would have difficulty taking out said jeep, even if it was armed with missiles had machine guns, which B-2s aren’t…because they’re bombers, not fighters.

But let’s put aside the fact that nothing about the stealth bomber made no sense, aside from its mission as a stealth dumper of nuclear waste in an already-contaminated area (they’d be able to haul more than 100 barrels of the stuff in a B-2). The girls leave Shiba behind because they’re entering a heavily contaminated zone. Then he inexplicably wanders off and removes his helmet, defeating the purpose of leaving him behind? Didn’t he say before he was willing to face the music for what he’d done? The last nail in the coffin was the ticking-clock sequence, which featured and actual on-screen clock…for some reason. And Ibara’s frequent mood swings just come off as poorly-defined characterization. We can’t connect with her or the other two girls, because there’s so little there.

We won’t deny this series looks pretty good (if a bit washed-out, like K was). But when a series frustrates you this much, and you don’t look forward to next week’s episode, it’s probably time to stop watching.