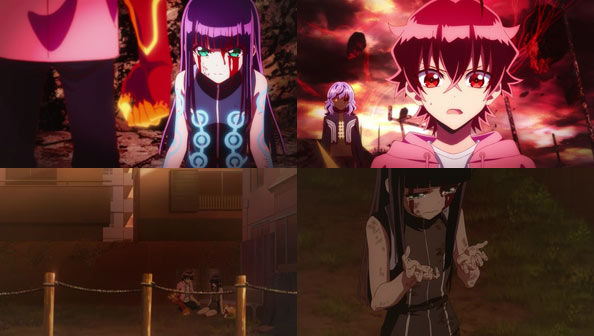 Yes, this show is still around, and yes, I’m still watching! Who would have thought that Benio not only had an evil overpowered brother who needs to be defeated down the road sometime, but also both their parents were killed by an overpowered Kegare that’s the equivalent of an Arrancar in Bleach: a kegare with human (or humanoid) form. This girl just has the worst luck.

But hey, someone’s looking out for her, and that someone is Rokuro. After getting the lay of the land, he peaces out of Magano with Benio at his earliest convenience, since Benio is in no condition to fight. 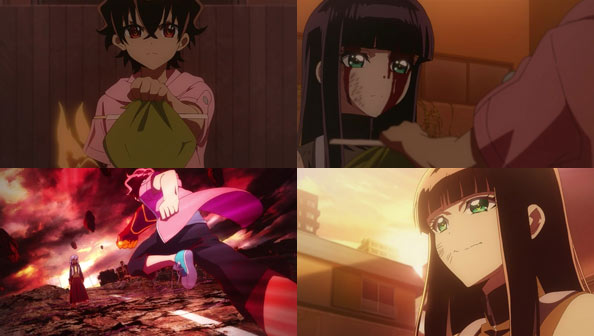 He uses a med-talisman on her, and she wants to head right back in there, but he tells her to eat first and cheer up, assuring her that her late parents would much rather she kept living than die trying to avenge them.

As he goes in to get a better idea of who they’re up against in Kamui, Benio actually listens to Roku and eats his stone-cold oyakodon, which actually isn’t that good at all, but Benio still scarfs it down. As she does, she really does cheer up, remembering all the positive reinforcement and support Rokuro has offered her over their time together.

Back in Magano, Rokuro learns that Kamui is primarily concerned with being “entertained”, and with his demon gauntlet thingy, Rokuro seems able to provide the absolute minimum quantity of entertainment for Kamui to reconsider killing him quickly. Roku has potential, after all, and anyone or anything that can land a blow on Kamui is someone he isn’t in a hurry to kill. That would be boring!

Of course, it isn’t long before Kamui turns up the difficulty level a tick, and Rokuro is shot back and bloodied with ease. That’s when a reinvigorated Benio returns (albeit hopping on one leg) to relieve him.

Benio certainly has a head full of steam, but it’s been abundantly clear for a while now that neither she nor Rokuro can accomplish much on their own; they have to combine their power in order to make progress.

And progress that make, as Rokuro catches Benio from out of the air, the two combine their spiritual energy (or whatever), her sword gets bigger and meaner, and they deliver an epically crushing blow to Kamui.

Kamui survives, but a limb lighter, and decides he’ll withdraw for now and wait for these two to become stronger, or, if they produce a Miko, send him or her to face him. It doesn’t really matter, as long as he’s entertained.

I actually like the guy’s philosophy; it’s at least more interesting that just a mindless killing machine. Guy’s got a code, and he’s got priorities. He even remembered Benio’s ‘rents, and how they were one of his only victims who actually sacrificed themselves for someone else, namely their daughter.

Turns out the encounter between Rokruo+Benio and Kamui was all but set up by Arima, to further bring the two together, and you can hardly argue that it worked like a charm.

Benio wakes up in bed with Rokuro, in the lovenest Arima prepared for them, no more willing to follow through with the plans Arima made for them than before, but still no less grateful for Rokuro’s support. Her parents told her being scared is okay, because they’re not alone. And she’s not alone here.