Meetings tend to be boring, and the first meeting we witness of the researchers and their professor, Ikeda, is no different. For one thing, Ikeda’s frequent “muscling up” routine isn’t particularly compelling.

For another, in reporting the results of their experimentation thus far to their professor, Himuro and Yukimura don’t add anything new for us, the audience. It feels like a recap, with further romantic progress halted so a heretofore unseen character can get brought up to speed.

Ikeda is intrigued by the research, but suggests that his students branch out to other subjects in order to amass more useful and accurate data. This is interpreted as branching out to the lab as a whole, which is only six people, only one of whom is remotely “normal” (Kanade).

The resulting experiments, in which Yukimura and Kanade share a straw (which is blocked by Himuro) and Ibarada and Inukai (childhood friends who know each other extremely well) have a competition to see who can raise the other’s heart rate the most, carry little scientific or comedic value. Frankly, the whole exercise felt like a drag.

RikeKoi is starting reveal the overarching flaw in its premise: Not whether two scientists can determine through science whether they love each other, but whether they should, and if that results in worthwhile entertainment. In the case of this episode, the answer is a firm “yah, no.” 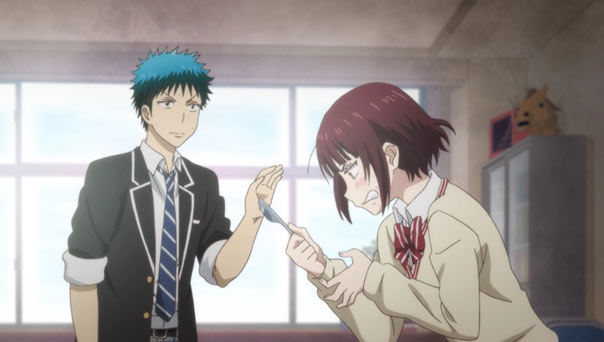 While last week was an exploration of two very different people finding common ground in each others bodies (that sounds kinda wrong, but bear with me), while a third supports them, while this week explored the ironies and misunderstandings inherent in suddenly throwing a fourth member into the club, Ito Miyabi, complete with her own set of charms, and neuroses. She’s voiced by Uchida Maaya, no stranger to playing weirdos.

Itou joins and proceeds to thoroughly clean the supernatural club room. The others don’t tell her they’re in the room because it’s a safe place to switch bodies—which is far more supernatural than materia stones and UFO photos. Instead, they simply accept her intermittent existence in the room without explaining anything.

So when she inevitably walks in on Ryuu and Urara kissing, she gets the very reasonable impression that the others never intended to start the supernatural club back up, but only wanted a place to make out. Slowing her roll and telling her the truth from the start might have been tricky, but now they have a scorned Itou out for revenge, which is worse.

Itou’s campaign of vengeance consists of distributing posters, fliers, and rumors about how Yamada and Shiraishi are an item. When Yamada sees that the rumors are isolating Shiraishi again, he takes the rash step of cornering a hostile Itou in the clubroom and coming clean the quickest way he can: by kissing her.

This is actually played as a pretty uncomfortable scene, with Itou’s face a flurry of expressions from fear, nervousness, bashfulness, to acceptance, and then the face of Itou (in-Yamada’s body) before Yamada (in-Itou’s body) clocks her.

Chalk the discomfort to Yamada feeling he neither has time or the wherewithal to properly explain, and Itou her hostile state wasn’t going to listen.

After the obligatory check of Itou’s body, Yamada proceeds to try to undo all the harm Itou’s rumors caused, only to find no one took them seriously, because she’s known around school for making stuff up, like UFOs and such. Shiraishi even admits she was alone because it’s close to exams and she asked not to be disturbed!

So Yamada’s desperate measure turned out to be completely unnecessary, while switching bodies had far greater consequences, as Itou (in Yamada’s body) disappears after being spotted posing in the mirror, striking poses, and performing finishing moves. 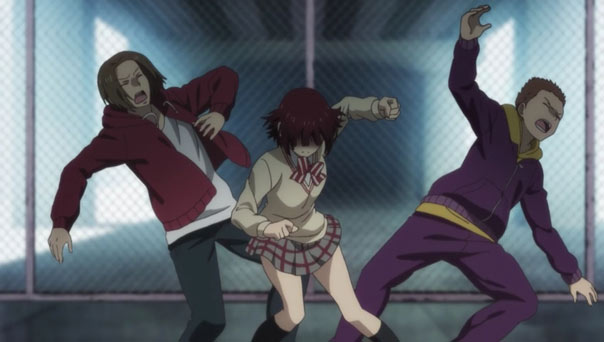 A search of Itou’s phone reveals she was being hustled for supernatural objects by some thugs, and decided to go after them in Yamada’s body. She gets her ass kicked, but Yamada (in Itou’s body) shows up and takes the thug trio out, introducing us to the idea that Yamada’s stronger body wasn’t enough to fight her enemies; Yamada fights with his spirit, so even in Itou’s body, he kicks ass. I really like this concept. 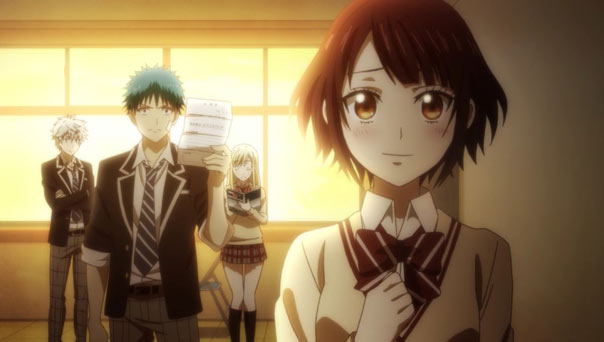 After switching back to their own bodies, Itou is content to withdraw with dignity, but Yamada shows her her completed club application, re-welcoming her into the supernatural club. At the end of the day, Itou was lonely and looking to become more popular at school, and while the path to get there had a few corkscrews and switchbacks, she’s now in a club with far better caliber people than she first imagined when she saw them kissing.

Itou also puts the possibilities of the body-swapping into high gear, testing out every possible combination between the four of them. I’ll admit I lost track watching the scene the first way through (which I think was kinda the point), but the order goes like this:

That right there is some big-league comedic complexity. It’s a wonderfully absurd sequence and all the voice actors do a great job imitating each other’s voice patterns and modulations.

In the end, we finally meet more witches, though they’re not identified as such. I’m not sure where this whole power struggle for class president between Miyamura and Odagiri Nene (Kitamura Eri) is going, but nor do I really care…yet. 7-nin will have its work cut out for it integrating stodgy politics into the far more fun body-swapping narrative.