As Hina cries in her big sister’s lap, Rei catches us up on the reason for her tears, as well as her missing shoe. It’s a harrowing, all-too familiar and common story: some girls in her class with nothing better to do started bullying her longtime friend Chiho. While everyone ignored it or pretended nothing was happening (even the teacher), Hina, like a Fire Sister, kept talking and eating with Chiho.

Eventually, the bullying got so bad Chiho stopped coming to school, and her mother decided they’d move to where her father works, pulling her out of school. When the girls who started all this make light of that in gym class, Hina pounces on their queen bee in vicious rage, to no avail.

Now Hina is the target of their bullying, and she’s terrified of going back to school and being alone, just as she’s distressed that she couldn’t do anything for Chiho. After scaring Momo with her crying, Hina runs out into the night, and Rei very slowly chases her (what can you say; kid’s not an athlete).

Rei makes no bones about it: Hina is the reason he’s above water; she is his lifesaver; and after gently taking her hand, he promises he’ll always stay with her, no matter what. After all, for all the distress and pain it’s caused her, Hina is quite correct that she did absolutely nothing wrong in trying to defend Chiho. That it was beyond her ability to stop the bullying, or that she’s the new target, does not change that simple fact that she’s a good person. 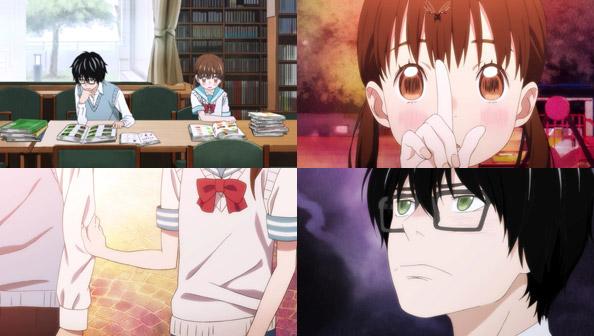 Fully appreciative of her fragile state and need to not be alone, Rei spends the day with her at the libarary where they look at books, something he’s been doing a long time and the reason he’s so good at shogi at his age.

While she’s looking at Japanese sweets books, Rei is looking for the name of the “ladybug bush” of his dark earlier years: “Silverthorn.” He also finds the scientific name of the Asian Ladybug that populated those bushes, and Hina notices the kanji for that name also means “heavenly path.”

Rei takes her to the bush and places a ladybug on her hand, and it climbs as high as it can before flying off toward the sun, demonstrating why, long ago, people gave the bug that name.

As the beetle flies heavenward, Rei would wish nothing more than to unleash hell upon those who have done this to Hina; but just as she walks the heavenly (i.e. just and rightous) path, he knows so must he. Tearing those bullies limb from limb won’t solve anything, and probably onlu make things worse for Hina. 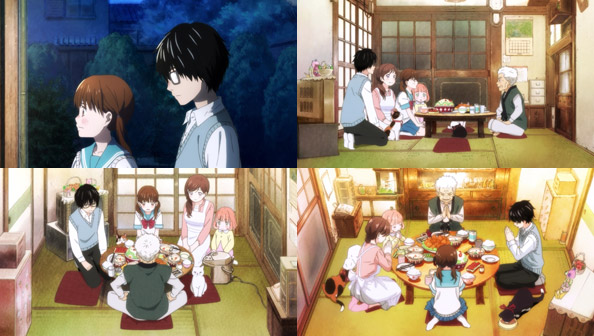 Evening arrives, and Rei escorts Hina home, where Akari and Momo are waiting for them and invite Rei to join them for a sumptuous dinner consisting of all of Hina’s favorite foods. Their Gramps is there too, and gravely asks Hina to sit down and listen.

Akari told him everything that happened…and he praises her heartily for what she did. He knows from the papers how serious bullying can be, so he has nothing but joy and pride in knowing Hina would go to bat for her friend despite the dangers involved; something most adults wouldn’t do. He echos her own earlier words that she did nothing wrong, and should be proud of herself.

Now, I watched his monologue in a very dusty room, so you can imagine I needed a lot of Kleenex nearby, just as the Kawamoto sisters did. Both Gramps’ words of encouragement and Akari’s meal were things they knew they could do for Hina. Rei wracks his brain over what he can do, but simply being there for her, by her side, and assuring her he’ll never leave it, is already enough.

After Matsumoto and Smith mess around with the towering Kumakura’s huge shoes, we see a shogi den settled down for lunch in June…when I guess it’s to hot to eat outside? As he munches on his healthy yet high-class meal, Nikaidou rants about how Rei must get to the finals of the Newcomer Tournament so they can face one another, then proceeds to analyze Rei in a manner that’s far too accurate for Rei’s taste.

When Nikaidou tells him it stands to reason he’d know his deepest depths like no one else, because they’re not just rivals but best friends, Rei, a paragon of stoicism to that point, freaks out and books it out of the room. “Leave him be,” an older player says, “it’s funnier that way.” And to a geezer like him who was one, teenagers are funny, with their needless emotional outbursts and poor organization of priorities.

But what I took out of the first half of “June” is that Hey, Rei is his Nikaidou and Nikaidou is Rei’s. Rei has a friend. Not the only one, either! That fact might embarrass him, but that’s progress, and it took a lot for him to get to that point.

In the second half of “June” we get a welcome cut to the Kawamoto residence, where Grampa makes his first appearance this season (his love of and fawning over Momo will never get old, because let’s face it, Momo deserves all the love). He’s holding a brainstorming session for new sweets after the success of the last one.

When Momo is asked what goes in the water, she first says “duck”, but a duck on top of an agar sweet could easily fall off, while a duck encased in that agar would look like a dead one. Then Momo suggests a sandal, recalling a time she lost one while Akari was walking with her near the water. Gramps instantly declares her a genius and a prodigy.

But there’s something off about this scene: Hinata. She doesn’t say a word, and has her head down as she scribbles into a notebook. At bathtime, Akari finds her sitting alone on the stoop, and when asks what’s wrong, Hina says “nothing” and shows her sister a smile that’s probably forced, because it’s gone again when she’s alone in the bath, looking up at the moon. 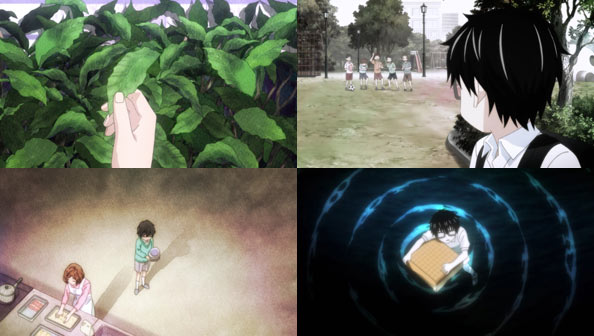 So what’s up with Hina? I can guess, considering she’s entering adolescence, but little did I know the next segment would serve as a dark preface to that question’s answer. In the present day Rei notices a plant with the same leaves as a “ladybug bush” he noticed when he was a little kid being teased, bullied, and ostracized at school.

As we know, Rei chose shogi to please his stepfather, willing to endure the hate from the man’s biological children because he had no choice. Now we know to the extent Rei, Shogi Prodigy is not the product of a nature or nurture, but pure, elemental survival.

Rei had no safe haven from the hatred of classmates or stepsiblings. He made himself more invisible and indifferent to prevent escalation at school, but trying to ingratiate himself with his stepparents and not feel like a burden only intensified his siblings’ resentment towards him.

As much as Kyouko’s been humanized in the present, the villainous version reappears in these flashbacks, as someone who couldn’t give a shit Rei’s problems, either the loss of his family or the continued abuse he faces at school. He’s a creepy eyesore to her. No wonder it’s still hard for him to talk to her today!

Shogi wasn’t a dream or aspiration, it was a life raft. Instead of reacting to the horrible things in his life, he buried his nose in shogi books, studied feverishly, and played like his life depended on it, because he thought it did. A perfect and devastating visual is of him desperately treading water in a dark sea, with nothing to cling to but a floating shogi board.

Things are much better for Rei now; he has friends, a surrogate family that loves him unconditionally, and even a place to hang out at school—but though he still carries wounds and scars that may never heal. More importantly to the closing act, a product of his ordeal is that he can spot the warning signs of others enduring the same from a mile away, as he instantly does when Hina enters the room.

She’s missing her left shoe (in a weird, prophetic echo of the shoe Momo suggested for the dessert), the sock is filthy, and her face is a raw mess of tears. For the show to so quickly and concisely reassert all the crap Rei had to go through, only to visit it upon one of the kindlest, gentlest souls in the show in Hina, is almost too much to bear, especially when the episode ends before we’re able to learn the details or see her be comforted.

I guess the details don’t matter; it would seem she’s now going through the same thing Rei did. I can only hope that if she cannot find a solution at school, at least going home won’t just add to her shit sandwich. Unlike Rei, who only had shogi, she has Rei, Akari, Momo, and Gramps. Being a teenager is usually terrible for everyone, but it’s still worse for some than others.