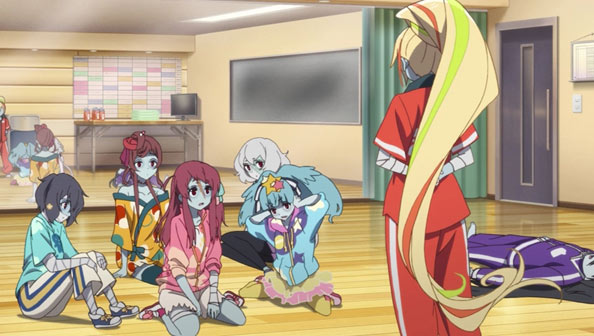 The group’s next mission is neither death metal nor hip-hop, but your standard spontaneous “guerilla” idol performance in a public place. They only have one night to prepare. Lily suggests they make their group more official by naming a leader (Saki) and a permanent name (Franchouchou, inspired by Tae sneezing marker ink). 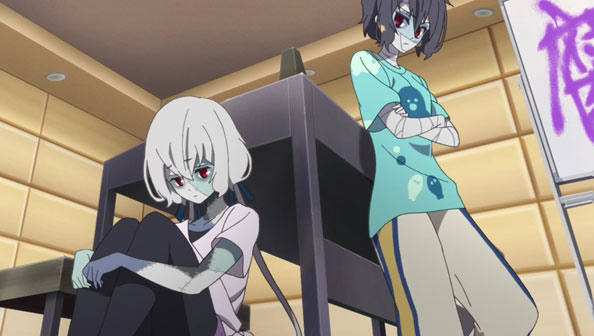 Practice is… a bit shaky, as one would expect of a group fielding five amateurs. Matters are made worst by the fact the other two members who are pro idols—Junko and Ai—are contributing nothing but sullen looks and pessimism. Sakura tries to rally the five, but Yuugiri steals her thunder, and ends up more effectively galvanizing the girls (minus the idols, that is). 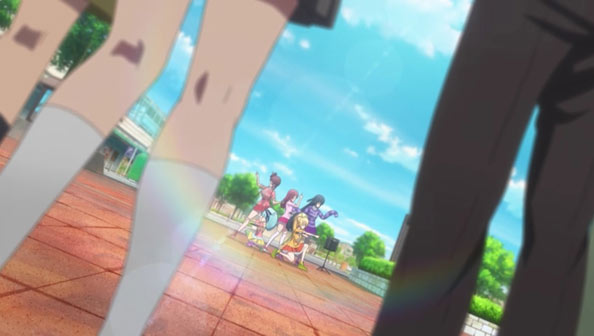 The day of the performance arrives, everyone is in their human makeup…and Junko and Ai stay in the car. The remaining five have to make do…and they get a crowd to gather. But when Lily trips just like she did in practice and Sakura suddenly forgets the lyrics, that crowd becomes disinterested and starts to disperse fast. Franchouchou needs cavalry, and they get it in Junko and Ai, who do what they do best.

The animation of the actual performance is a mixed bag. On the one hand, it’s very colorful and stylish, smooth and precise. But the 3D CGI models of the girls are different enough from their 2D counterparts to be conspicuous and distracting, and their motions are so precise they look less like people and more like robots. Execution issues aside, the group ends up putting a smile on the face of the last spectator, a little girl who is soon dragged off by her jaded mom. They were able to reach one person, so there’s no reason to believe they can’t reach more if they get better.

And they will get better, if the change in attitudes of both Junko and Ai are any indication. Junko had never performed in a group and was weary of doing so, but once she got into the spirit of things she had a lot more fun than she imagined. Similarly, Ai could tell from their performance that the others were sincere in their desire to get better and become more legitimate, so she’s now more willing to lend her not inconsiderable talents to that effort.

Both Kuroda and this show’s title make reference to the “wasteland” / “wildlands”, but this show covers precisely zero new ground and blazes no new trails. Its premise and themes have already been thoroughly explored by other shows. There’s no uncharted territory here; only a retracing of steps.

KOYA also continues to paint its six main characters with the broadest of strokes in the dullest and least adventuresome of tones. This week features an interminable “training camp” that is supposedly intentionally aping the Hot Spring Inn cliché for comedic effect, but really only comes off as a Hot Spring Inn cliché, full stop.

There are two main developments at play here: the constant philosophical clashing of Kuroda and Andou, and feelings for Bunta awakening in Yuuka, depsite her hard friendzone status in his eyes (as far as one can tell). I personally prefer the raw, spunky Yuuka to the more muddled raven-haired maiden that is Kuroda, but portraying Yuuka as suddenly so blushy and weak-kneed around Bunta – who is barely a character at all at this point – does her no favors. 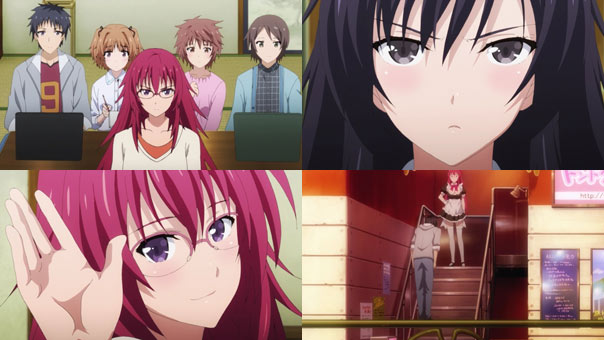 As for the conflict between Kuroda and Andou, well…Kuroda’s a hard one to figure out. Her character has a couple of distinctive ticks and qualities that don’t mesh into a cohesive whole. She’s more of a promising idea of a character not fully thought out. As for Andou, well…she is a character driven by one thing and one thing only: BL. And using the word “fangirl” as a verb; she really digs doing that. 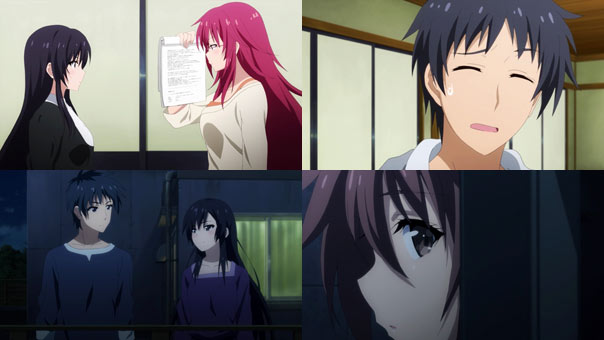 She loves BL so much, in fact, she’s willing to see the treatment of Kuroda’s game through BL eyes, labeling it a “Yuri-homo” rather than a straight-laced shoujo story. Her constant reminders to everyone that she’s obsessed with BL even seems to wear on the cipher Bunta.

No, the most impactful moment of this increasingly dreary episode was when Andou got fed up with sparring with Kuroda, said “I’m done”, and peace’d out. Bunta managed to very easily lure her back to the inn from Akiba (he spends a lot on rail travel this week!), but I fear no amount of convincing will bring me back to KOYA. There’s just not enough here to sink my teeth into. To borrow Andou’s phrase: “I’m done.”