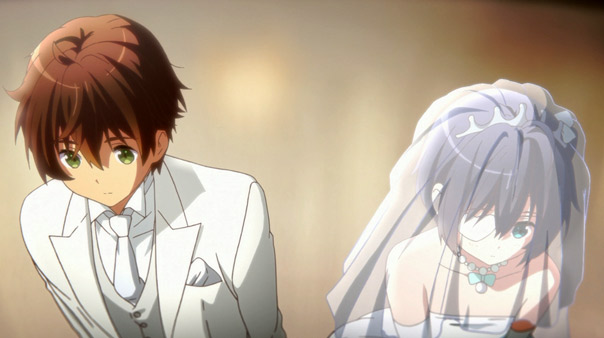 So, we finally got around to watching this movie, which is a suitable substitute for the first season, as it’s pretty much the first season (our reviews here) on fast-forward, complete with a few awkward cuts from one episode to the next. The conceit is that in the time before Rikka knows whether she has to move away or will be able to live alone above Yuuta, she retells her story to the audience from her perspective. 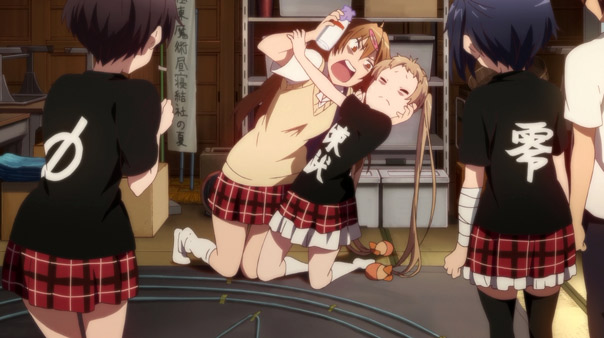 The only problem is, aside from the sequences that bookend the film and a couple narrations, there’s nothing different from the events that take place here and the way they unfolded in the first season. It would have been interesting to see more new material from that time, rather than simply rehash it all in abridged form. Thus, this film is kind of a let-down, but only for those who went into it not knowing what it was going to be.

For those who want to be brought up to speed on how Yuuta and Rikka fell for each other and ended up living alone together (however briefly), this film does the trick, though certainly nowhere near as efficiently as, say, Kill la Kill’s excellent cold-open recap. For those like us who thought there’d be more original material, it was still enjoyable to go back and be reminded why we liked the franchise so much we eagerly awaited its sequel, which is proving just as good.

As for the original material, the ending, in which Yuuta (along with Touka) have to go to bat against Grandpa Takanashi, and it was great to see Rikka’s moment of jubilation upon learning they succeeded. But the star of this film is the entire pre-opening credits sequence: a gorgeous, lavishly-animated wedding-slash-battle that’s really just a Rikka daydream. If you’re not interested in a gorified season recap, we still recommend watching at least this first bit of the film, which is a great microcosm of why we love the franchise so much.