Movie buff Hibiki wants a new home theater system. The only problem is, due in part to her gym fees, she lacks the funds to buy one. Enter the Silverman Gym Arm Wrestling Tournament, which has both men’s and women’s divisions and a grand prize of 100,000 yen for each.

Machio explains the proper setup and form for official arm wrestling, then matches Hibiki up with Ayaka to give it a go. As with boxing, Hibiki reveals she’s a superhuman beast, dispatching Ayaka with ease (and turning the proceedings into a battle manga, with requisite intense faces). Even Machio has to get a bit serious to beat Hibiki.

With Akemi sick and neither Ayaka or Satomi interested in participating, the women’s division’s first round is also the final round, because there are only two combatants! Hibiki, and the short silver-haired foreign lass who up until now we’d only seen the OP and ED: the Russian Nina Void (voiced by Touyama Nao).

Nina is a seasoned veteran in the arm wrestling world, and Russia is a power in that particular sport. She’s also never been beaten by someone her own age, so it’s a huge shock when Hibiki defeats her almost as quickly as she beat Ayaka. It also changes Nina’s plans dramatically: instead of heading back home (which she needed the prize money to do), she decides to enroll at Hibiki’s school as a transfer student. 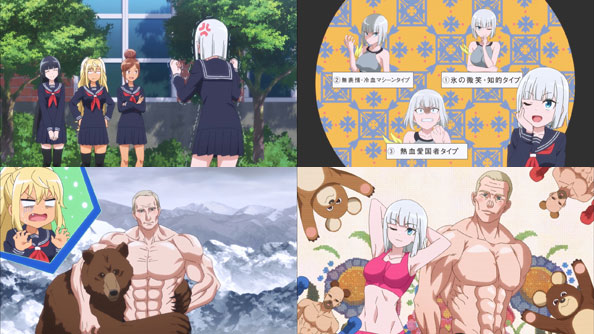 After going over the three main stereotypes of Russian anime characters (Intellectual with Icy Smile, Emotionless/Cold-Blooded, and Zealous Patriot Type), voicing her desire not to stray too far from any of them, and declaring her love for her dear shirtless bear-wrestling leader Putin, Nina explains how she’s never done that much weight training with equipment.

Instead, she’s a strong proponent of “kipping”, i.e. rhythmic pull-ups and chin-ups that use your momentum. Proper form and consistency mean that the more you kip, the more your nerves know what to do and when in martial arts like sambo.

Hibiki demonstrates that she’s terrible at kipping, but Nina (wrongly) assumes her rival is simply holding her cards close. Speaking of close, it isn’t until after Hibiki returns home from the gym that she learns that Nina is going to be living with her for the foreseeable future. There will be no escape from the rivalry that has been thrust upon her.