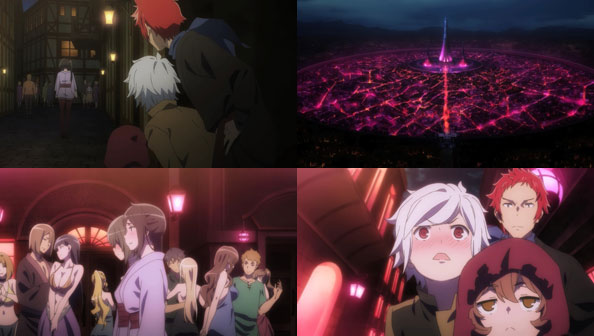 When Bell, Lili and Welf are concerned about Mikoto acting weird, they follow her one night, and to her surprise she ends up meeting with Chigusa and entering Orario’s famous pleasure district, which is run by the wealthy and powerful Ishtar Familia (Ishtar is the Akkadian, Assyrian and Babylonian goddess of love, war, and fertility).

Turns out Mikoto and Chigusa are searching for an old friend of theirs from their original home in the Far East, where she was a noble. Chigusa spotted her in the district and came to Mikoto, who saught confirmation before coming to the rest of Hestia Familia. 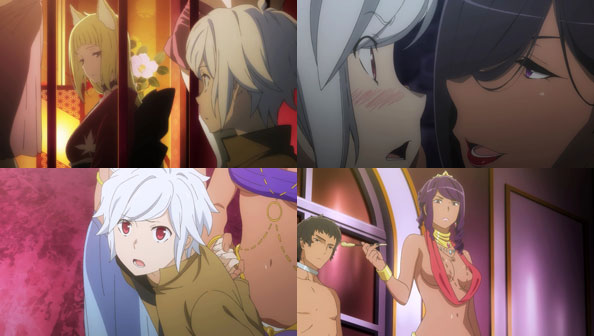 Lili, and certainly Hestia, would rather the adorable Bell be anywhere but the pleasure district, where he is  almost constantly approached, accosted, and embraced by dozens of beautiful, available women, including Aisha, one of Ishtar’s higher-ups. Separated from the others, Bell never had a chance to escape their clutches.

Right before he’s surrounded and picked up and taken to Ishtar’s palace to be passed between several eager Amazonesses, he spots an ethereal, yukata-wearing fox woman in a window, who judging from the glimpse of her last week, is the person Mikoto and Chigusa were looking for. 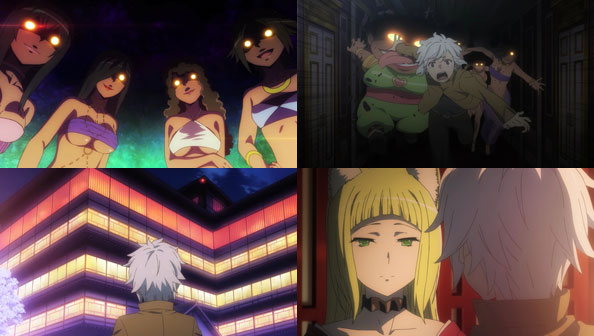 Ishtar herself has no time for a first-timer like Bell, but her underlings are all but willing to suck him dry, so to speak. The start of their fun is interrupted by the huge and grotesque Phryne, and Bell uses the distraction caused by the Amazons’ bickering (and his adventurer’s sneaking skills and speed) to slip away.

He ends up in the courtyard of one of the district’s fancier-looking brothels, and who does he encounter within one of the rooms but the straw-haired fox woman, named Haruhime, who assumes Bell is there to buy his first sexual experience. 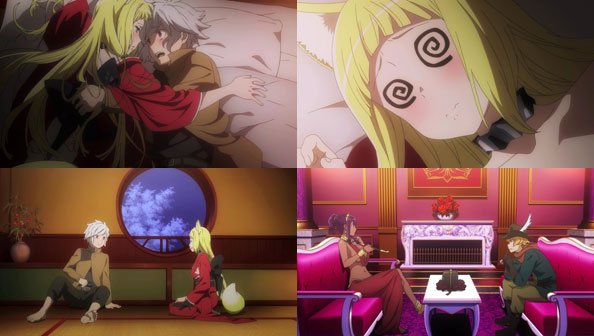 It seems despite being more experienced than Bell, the sight of his collarbone still overwhelms her, giving him the opportunity to tell her he’s not there for sex, just to hide from the Amazons. She can understand; it’s tough to be a first-timer in a district where it’s the occupation of so many women to kidnap and have their way with you.

As they spend the rest of the evening chatting, discovering that they share a love of stories about heroes that originally drew them to Orario, Ishtar has a meeting with Hermes, who has delivered something to her that is of importance in her ongoing rivalry with Freya. When Hermes is reluctant to tell her what other weaknesses Freya might have that she can exploit, she removes what little clothing she is wearing in order to force the issue. 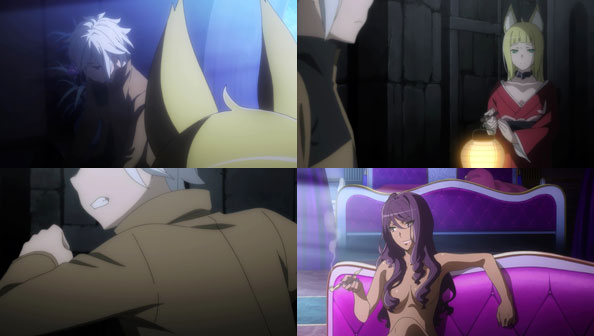 Haruhime tells Bell that while she loved those heroic stories, she no longer sees herself as someone worthy of being saved or protected. Despite her noble appearance and cushy digs, she doesn’t seem to see any nobility in her profession, only filth. It really brings Bell down, who doesn’t agree that she should have to sacrifice her dreams simply because circumstances, many of them not of her making, landed her in a brothel.

Still, he runs off into the night none too soon, as Aisha shows up immediately after to escort Haruhime back to her chambers. As for Ishtar, she gets the information she wanted out of an overwhelmed Hermes in bed: Freya is obsessed with Cranel Bell, and she can hurt her by stealing him from her.

So now Bell finds himself in the sights of not one but two distinct and powerful goddesses of love, war, sex, and fertility, and almost certainly doesn’t want his first encounter with Haruhime to be his last. If he’s the hero he thinks he is, he’ll no doubt try to find a way to free her from servitude.