In a particularly chaotic episode, Mitsugu is captured by the president of the Torture Club for allegedly getting to close to Nami, the Dance Club president, whom he is stalking. Due to their mutual interest in Mai, Karate Club president Kasuno teams up with Nami to free Mitsugu, who packs a bag for Mai, who is apparently no longer safe in her home.

The pair head to Dr. Chihiro’s “house”—more of a mad scientist’s lab—only for Chihiro to have a predatory ulterior motive for harboring Mai. After Mitsugu sedates Chihiro, every other member of the cast shows up in sequence, demanding answers about who Mai is.

Kasuno and Nami end their brief alliance and their respective clubs “fight” each other, all while Maki films it and Kaoru runs around cosplaying as a Chun Li-like character. The Disciplinary President Jinko then shows up, demanding everyone stop breaking the rules.

The sudden surge of characters interacting means Vlad Love relies far too heavily on sliding inset portraits of characters talking and reacting, such that the episode at times looks more like a PowerPoint presentation than animation. There’s so much of this it borders on ludicrous—nay, it is ludicrous!

Then Mai drinks some very suspect blood from Chihiro’s vast collection and transforms into Salamander, and world-ending dragon, and starts destroying the city with her fire breath while Chihiro has a lengthy, meandering, and seriously unfunny monologue about how she came upon the blood. 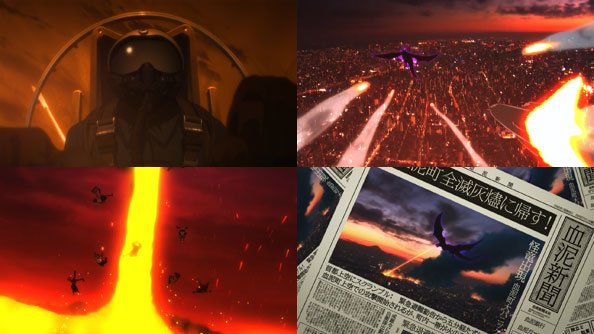 From there Mitsugu and her classmates fade away and the focus shifts to a kaiju movie-style sequence in which military command center instructing fighter pilots to attack Dragon!Mai. This sequence is very sluggish, full of throwaway characters worrying about being sued for copyright infringement—an old, played-out joke that just won’t die.

Speaking of dying, once the fighters are authorized to open fire, the resulting battle over the city is cool-looking, though it also results in the death of Mitsugu and all the other characters in a massive explosion. Once again, the story ends up in the papers, and we can look forward to everything resetting back to a measure of normalcy next week.

Once again, the surfacy spectacle is occasionally diverting, but it’s hard to care about anything or anyone when everyone is doing little more than yelling at or slapping each other, and nothing that happens ever matters. Mai becomes an unthinking force of nature, while Mitsugu becomes just one more victim of the destruction. Once again I’m forced to ask: where is the vlad love in Vlad Love?

What is it: The story of seventeen swords given human form living together in a citadel. They are charged with annihilating the History Retrograde Army, a group committed to changing history. Rookie Yamatonokami Yasusada is made Captain in his first operation, and his team is wounded without completing their mission.

Why You Should Watch: TRH welcomes you in to what amounts to a big family full of individuals, each with their own quirks. The clash of personalities suggests an easy chemistry, with even some heated moments quickly defused. Congeniality rules, as all these human swords recognize they all share the same objectives: serve their master the Sage…without getting broken.

Why You Shouldn’t Watch: The episode takes some time to get going. After a dark and murky action scene that turns out to be a dream, it spends an inordinate amount of time on a snowball fight that clunkily introduces the cast one by one.

There are also too many characters with complex names to keep track of (17 in all), and not one lady among them. Despite a lot of dialogue being given over to explaining the history-preservation concept, the execution left much to be desired, as the ultimate mission just felt like fighting evil foes in an inn. Simply labeling it as something else doesn’t go far enough to sell the concept.

The Verdict: While not a bad-looking show with a nice underlying family element, TRH just didn’t wow me, or even hook me, in any meaningful way. On paper, human swords being sent on missions to save history sounds intriguing, and future episodes may prove more exciting, but the execution in the crucial first episode was lacking. I doubt I’ll be picking up this show in the long term.