Eren wakes up in the strange blue cave, a place he’s never been, but which he still finds familiar. Rob appears with Historia and tells Eren there’s a reason for that. Then Rob and Tori place their hands on his back, and the memories come back fast and furious. Not those of Eren himself, but those of his father, and how he came to inject his son with the royal power of Titans.

The memory awakening works both ways, with Historia suddenly remembering her half-sister Freida, who would periodically visit her to make sure she was doing okay, each time using her Titan “Scream”-derived power to wipe all of Tori’s memories before departing. 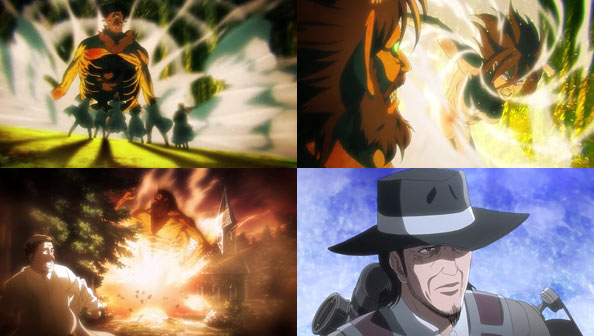 Rob completes the puzzle by combining Historia’s memories of Freida with those from Eren’s father Grisha’s POV, while also explaining the severe damage to the chapel above. Grisha came to steal the Titan powers from the Reiss’, specifically Freida, and while her Titan form was the most powerful, she lacked Grisha’s combat experience, and he ate her, thus stealing her Titan-controlling “Scream.”

Grisha then passed “Scream” to Eren via injection. To ensure no other Reiss would have the power, the Grisha Titan slaughtered Rob’s entire family. Only Historia wasn’t there, and she still carries the noble blood. Now that Rob has Eren, he no doubt intends to recover “Scream” for Historia. Whether she understands that will mean the end for Eren, I can’t yet say.

Back in the capital, Pyxis tells Erwin their coup is all for nothing if Rob Reiss obtains Eren’s “Scream.” They may have toppled the fake king, but they seem reluctant to let another take up the mantle of leadership so soon…not if they’re not sure it’s what’s best for humanity, which is all Pyxis cares about, and the only reason he sided with (the very sadistic) Zachary and Erwin.

Rob trusts Kenny, but he probably shouldn’t, if Kenny’s smirk and scoff upon turning his back on Rob is any indication. Not to mention the fact Kenny is an Ackerman, a clan of warriors who once served as the swords and protectors of kings.

They started to become persecuted along with the Asian races, both groups that were immune to the royal power to wipe memories. We learn this in a flashback in which Kenny talks with his grandfather who is on his death bed. We also learn of Kenny’s sister Kuchel, who was pregnant with (I’m guessing) Levi at the time.

In any case, if the goal is to save Eren from being eaten, Mikasa, Armin, Levi, Hange, Sasha, Connie, and Jean will have to get through Kenny and his slightly depleted but still formidable Anti-Personnel Control Squad. 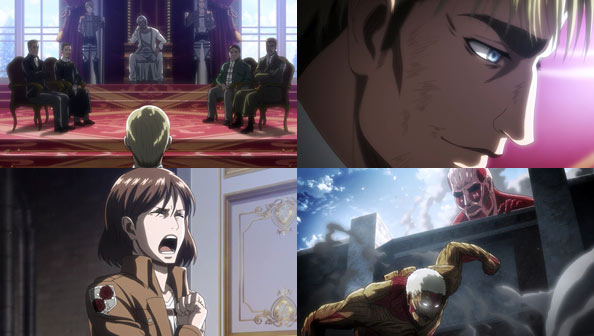 The plan Erwin sets into motion doesn’t just belong to or rely upon him. He must sit there, in front of the nobles sentencing him to death at the tacit approval of a fake king and watch how things unfold. However, he does betray a wry grin upon realizing that the right people made the choices he hoped they would. That’s when a representative of Pyxis’ Garrison Regiment bursts in and announces that Wall Rose has been breached by the Colossal/Armored Titan duo.

The members of the ruling government immediately show their colors by ordering all of Wall Sina’s gates closed, abandoning everyone in the breached Wall Rose in order to preserve government stability. Rather than risk a civil war between Rose and Sina over dwindling resources, they’d rather every man, woman, and child in Rose perish.

It proves too much for Nile, who refuses to carry out the order. Before he can be relieved or punished, Premier Zachary and his men burst into the throne room and, along with Pyxis, announce a military coup. Their reason? The government just violated the vary inviolate law not to put personal gain before what’s best for humanity.

Furthermore, the “King”, who never so much as lifts his head throughout this entire ordeal, is merely a dotard who has to be kicked awake by one of the councilors using him as a puppet for so long. The old government officials are arrested and led out, and eventually Irwin climbs the very gallows where his execution was to take place to announce the change in leadership.

Thanks to Flegel Reeves, the press reports what actually happened for once, and Hange meets back up with Levi Squad in the woods to deliver the good news themselves: The Scout Regiment are no longer criminals or fugitives, but free men and women. However, one could say the easy part—dispatching the overconfident government—was the easy part. Finding and rescuing Eren and Historia could prove more difficult. 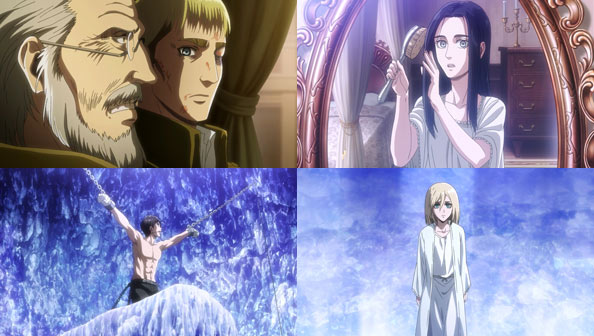 In a fine conversation in their horse-drawn coach, Zachary and Irwin discuss why they made the choices they did. Zach was more concerned with sticking it to the government officials he hated so much than saving humanity, but concludes and he and Irwin aren’t so different: their actions may ultimately save humanity or may not, but the similarity is in the fact that both of them saught to preserve their own lives.

What of Eren? He wakes up deep beneath the Reiss family chapel, a cathedralic cavern made of eerily blue luminescent rock, chained to a great plinth. The night Wall Maria fell five years ago, Rob Reiss lost his entire family to “raiders” who destroyed the above-ground chapel, but the level of destruction doesn’t fit the M.O. of raiders. I’m guessing the damage was caused by a Titan.

And that cave is apparently where new Titans are made, by feeding humans who can transform to humans who can’t, imbuing them with the power to do so. It looks like Eren is the dish and Historia the intended diner. Will Mikasa and Armin make it in time to stop this?