Eylstadt’s antiquated, outmatched defenses are brought to the brink against the mighty modern Germanian war machine, and Izetta places us right in the trenches to experience how dire the situation is. A young private is tense before the action even starts; and then all of a sudden his commander is dead, the landscape has changed, and the air is full of cries of pain and despair.

Fine’s forces are receiving a drubbing, and a rout is all but certain. Her frustration with the ineffectiveness of their defense is compounded by her heartbreak that so many must give their lives, simply to buy time. Yet she has the presence of mind and the discipline not to send the forces she still has out to die in a blaze of glory. She may not like how she has to pay for it, but she needs time for the civilians to evacuate and for new lines to be established. 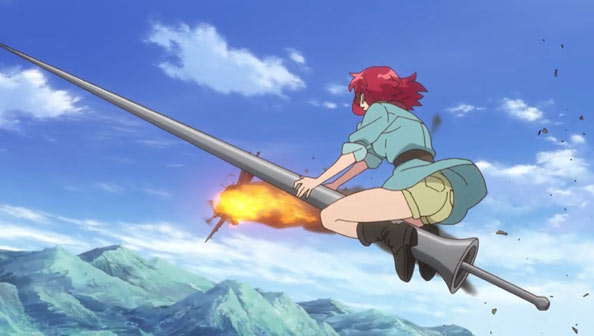 It falls to Izetta to do something about this horrible, hopeless situation. Against Fine’s wishes, Izetta enters the battle, and quickly turns the tables, using old jousting lances from the medieval castle as projectiles to take out the Germanian Stuka dive bombers one by one. She manages to take out the last plane with the lance she’s riding, timing it just right so she lands on the stump of it rather than fall to her death.

She’s stunned by the landing, but quickly springs back into action, right around the area where the private we met is fighting. He, along with the other surviving soldiers, bear witness as Izetta moves her assault on the Germanians to the ground, fighting with a desperate intensity that buoys their spirits.

This is the best battle of Izetta yet, showing the witch using her powers in creative ways, employing ancient weapons to bring down marvels of modern warfare. The Elystadt armed forces simply can’t compete by playing by the same rules as the Germans. So it’s good their patron saint has arrived to flip the game board over and shred the rulebook.

Thoughout the Germainian advance, stall, and eventual defeat, we cut to their headquarters, where army and air force generals keep a bottle of champagne on ice for the eventual announcement of their certain victory. But Izetta has thrown their entire prosecution of the war into chaos. A who squadron of Stukas and a company of tanks are simply gone. They popped the cork too early; one general’s glass falls to the ground and shatters.

Meanwhile, after enduring so much death, destruction, and despair, the troops rally around Fine and the second coming of their White Witch, their morale and hope for the future suddenly restored. The nervous private who watched it all leads the men in singing a powerful anthem of victory. Fine didn’t like how Izetta risked herself and defied her wishes, but she can’t deny the results were tremendous.

I imagine relatively “easy” victories such as this will be few and far between; the Germanian leader and those scientists are unlikely to let the military be caught off guard again. And as powerful as she is, Izetta is not invincible; it only takes one well-place bullet to kill her, just like any other girl. But for now, let the men sing.