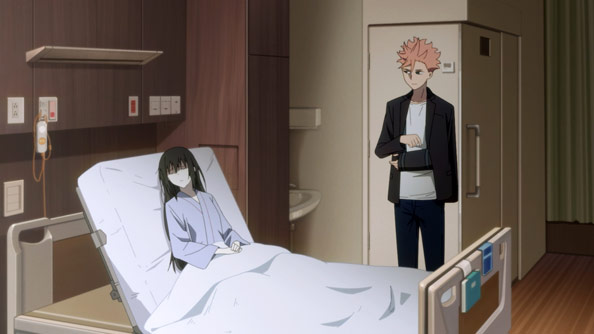 Narihisago makes it his mission to excise each and every one of Kiki’s tormentors from her dreams by apprehending and inducing the death of all of the serial killers in the waking world. This is a process that takes over a year, and in that time he forgets this isn’t the waking world. Doing police work, catching criminals, spending time with his family; he starts to feel like the past events when he was Sakaido in the Mizuhanome were all one long elaborate dream.

But no matter how much progress he makes, Kiki doesn’t recover. In fact, she only grows more frail, and in her final meeting with Narihisago, she tells him catching Walker won’t save her; there is no saving her. The killing in her head won’t stop.

Kiki has two options: slowly lose herself, dissolve, and warp the world with the violence and corruption within her dreams…or have Narihisago end her suffering now, while she’s still recognizably human. Even though she frames it as a necessary act to save the world, Narihisago refuses.

A month or so passes, and one day Kiki vanishes, leaving a pile of unconscious nurses in her wake who later recall sharing the same dream. It would appear Kiki’s prediction about “dissolving” came to pass. That means it’s only a matter of time before the world falls apart.

While about to deal with the Perforator, whom he’d “forgotten”, Narihisago encounters Hondoumachi. By her count she’s only been in the well-within-a-well for twenty minutes, which means even though it’s felt like more than a year to Narihisago, in reality he’s been in the well for less than twenty minutes. Talk about time distortion in dreams.

Narihisago doesn’t want to pick up what Hondoumachi is putting down, and considering how long this has been his reality, who can blame him? Still, when the meeting of the two detectives is followed by the world starting to come apart at the seams, he can no longer deny that none of this is real.

He calls his family, first to ask them to get away, but eventually, to say goodbye in his own way. Suddenly, and heartbreakingly, his memories from the real world rush back into his head in sequence, from the day he married Ayako, chronicling the birth and growth of Muku, and ending with Muku’s death at the hands of Challenger and Ayako committing suicide.

These images, the initial ones being the photos on the wall of his cell, all speak for themselves, so the very loud and melodramatic song felt like overkill. Perhaps it was more the fact the lyrics were in English—and very obvious and bad—than the music itself. It was still a moving scene. It could have been better with more restraint. 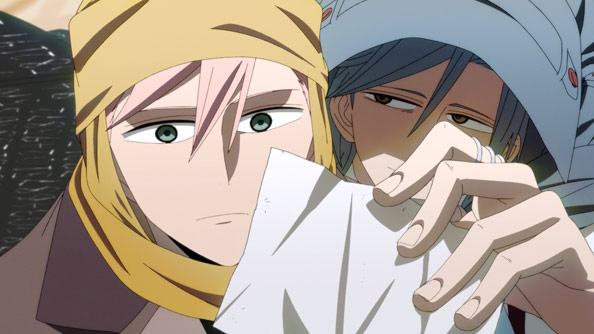 With the time in this dream world dwindling rapidly, Narihisago suggests he and Hondoumachi do as much investigating as they can, but his time is up, as Anaido extracts him from the well after ten minutes. He then tells Sakaido that he identified the body in the quicksand. It’s…Narihisago Akihito, someone Sakaido doesn’t know due to the protective amnesia of the Mizuhanome…but due to the condition of his brain, the amnesia function doesn’t work on Anaido/Fukuda.

The Wellsiders didn’t know that, which means Fukuda is up to something, likely under the direction of Walker. When Fukuda shows Sakaido the photo of Narihisago and his family (which he took from the corpse), things…take a turn. This desert isn’t Momoki’s id well at all, but the “end stage” of Narihisago’s. Remembering himself in his own well produces a “well storm”, depicted as a literally wind storm, as a fail-safe to protect the conscious from the unconscious…and Walker’s form appears in that wind.

ID:Invaded is starting to get very tricky with its Inception-style premise, but with the Big Bad finally making a decisive move that would seem to have Narihisago in check, it sure seems like more answers are forthcoming. Somehow, this all manages to hold together. Here’s hoping Narihisago can similarly keep it together, or if he can’t, if Hondoumachi can save the day.

When Sakaido wakes up in what he assumed would be Asukai Kiki’s Id Well, Kaeru’s dead body is nowhere to be found. Instead, he’s flanked by his very much alive wife and daughter. He remembers he isn’t the Brilliant Detective Sakaido at all, but Narihisago Akihito.

He hugs his family, who react as if he’s acting weird. But as far as Akihito is concerned, if being able to go back in time, fix what broke, and protect those who mattered most to him is “losing it”, then he doesn’t want to have it. 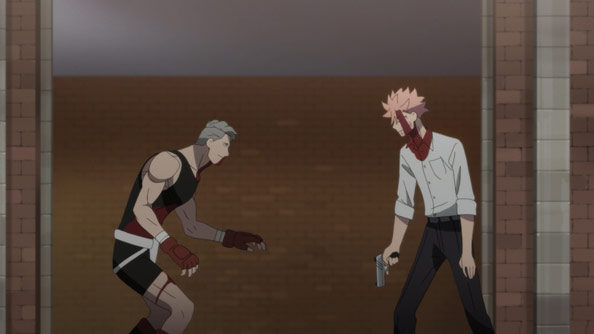 Without dwelling too much about what this reality is, Aki starts by paying a visit to the Challenger. Since this is before Muku was murdered, no one in this world has caught on to his depravities, except Aki, who comes in with outside knowledge from this reality’s version of the future.

Instead of rushing into Challenger’s house in a revenging rage, gun blazing, he challenges the Challenger to a “fair and square” fight, for which the killer is obviously more than game. Aki gets the absolute shit kicked out of him, but he manages to get the upper hand just as Momoki, the only backup he requested, arrives.

With the Challenger in custody, Aki directs Momoki to check out the basement, where a still-living victim sat bleeding in the “arena”. The woman turns out to be Asukai Kiki, and when Aki visits her hospital room, he’s perplexed by the fact she looks just like Kaeru. Kiki tells him how her thoughts have a way of broadcasting themselves to people around her.

Turns out Aki is in Kiki’s dream, because not only is there no sign of her injuries in the waking world (or whatever it is), but in this dream world of hers, serial killers like the Challenger come every night to kill her, with each night designated for a certain killer.

Aki soon wakes in his own bed with his worried wife and daughter by his side, while Momoki informs him the incident with the Challenger is being considered self-defense (a welcome change from the premeditated murder charge of his first “go-round”). He meets with Kiki—for real, this time—but can’t get her, an inhabitant of this “reality”, to explain what the reality is.

What she can tell him is that the person who has been letting one killer after another into her unconscious dreams every night matches the description of one John Walker: top hat, tails, and cane. This not-quite-Id Well-within-an-Id Well scenario created as many questions as it answered, and Hondomachi is still AWOL, but I am nevertheless deeply intrigued.

With Hondomachi diving into a well within a well, Assistant Director Togo leads rescue efforts, which consist of sending both Narihisago and Fukuda into Momoki’s id well. No one knows how this will go, but it turns out working out pretty well…for whomever set this elaborate, elaborate trap.

Sakaido and Anaido wake up in a massive, desolate desert with no food or water and an unmoving sun. The two Brilliant Detectives briefly clash on how to proceed, but their disagreements are more a matter of speed than content.

As Sakaido inspects Kaeru’s corpse a bit longer, Anaido follows footsteps of someone who “stole their watches”, which would explain the watch-like marks on their wrists. Sakaido eventually catches up, and the two trudge through the desert until they find something…anything.

It’s notable that with no memories of the real world but the Brilliant Detective programming that came with them, these two get along famously, with Akaido even calling Sakaido “brother.” 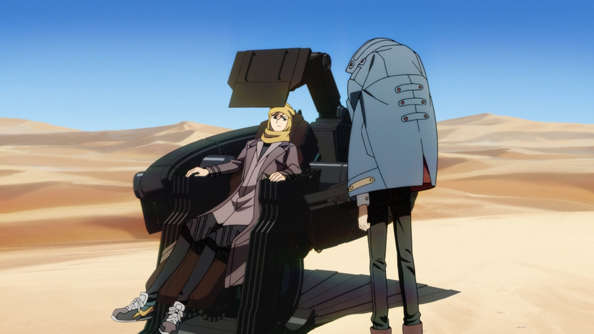 The two eventually find a second corpse—that of the “watch thief”—partially submerged in quicksand. They also find a second cockpit, like the one in Narihisago’s id well, which is also programmed for the id well of Asukai Kiki. Sakaido volunteers to dive in, while Anaido stands by to extract him in ten minutes.

In the real world, Momoki is being interrogated by police, but he just doesn’t seem like John Walker so much as the victim of a frame job. When he hears two detectives were sent into his id well, he demands they extract them at once. If Hondomachi is already in a trap of Walker’s making, Narihisago will join her soon. 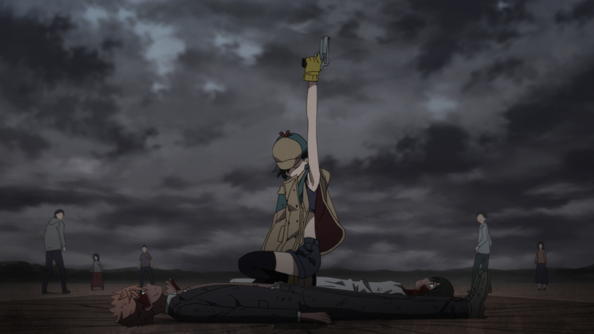 Hondomachi’s first mission in an Id Well is no murder-of-the-week, but could be the key to everything. The Id Well in question is Narihisago Akihito’s, taken from still-strong cognition particles found at the sight where he emptied a clip into Katsuyama Denshin, the man who killed his daughter Muku.

Here, Hondomachi is not Hondomachi, but the Brilliant Detective Hijiriido Miyo, sporting a stylish twist on the classic detective coat. Following the same pattern as Sakaido, the sight of Kaeru’s body triggers the memory of who she is and what she’s here to do.

While Miyo is handcuffed to Kaeru, the fact Kaeru was killed by lightning means they were cuffed together by a third party after Kaeru died. When Miyo spots a dead Narihisago, she determines he did it to keep her safe: lightning never strikes anywhere twice here, because it’s not real lightning, flashing every nine seconds without fail.

All the other people in the well are family and people connected ti Narihisago, but Miyo manages to get them all onto safe spots to stop the killings. When Narihisago’s wife and daughter Muku wonder what’s to be done about people elsewhere getting killed, the single-minded Miyo suggests they do something about it; she’s here to solve a mystery.

Moving in nine-second spurts, Miyo eventually makes it to an operational cockpit that leads to the id well of the Challenger’s last victim, Asukai Kiki. Diving into an Id Well within an Id Well is some Inception stuff we haven’t seen from this show yet, but Miyo wastes no time taking a seat in the cockpit to see where the rabbit hole goes.

Wellside, they’re unable to extract Hondomachi, then investigators burst in led by the Chief, and Director Momoki is placed under arrest for the charge of inducing all of the 44 murders committed by the serial killers investigated. In other words, they suspect him to be the John Walker; the mole within the unit.

As Momoki is taken away, and with Tougou now in charge, Habutae cracks the number pattern of the lightning: the sequence they’ve witnessed appears in pi around the ten millionth digit. Extrapolating from there, and taking into account a strike every 9.03 seconds, he calculates that the first strike hit the number “3” 1,084 days ago, the day Muku was murdered.

The Id Well within and Id Well, as well as Miyo’s freedom to expore it without interference from Wellside, comprise exciting uncharted territory, and it’s anyone’s guess which crazy twists and turns the mystery goes from here. As for Momoki as John Walker, despite the mounting evidence, I’m not 100% convinced it’s not an elaborate frame job by the real Walker.

Narihisago seems to be, however, at least with regards to having access to Momoki’s well. He believes he’ll find answers there one way or another. Will acting director Tougou indulge his desire to solve the case? I imagine so; as he’s said himself, there’s not much else he’s still alive for.