After much cathartic yelling and crying last week, it’s all gravy as Miou, Haruki, and their friends graduate from high school on a positive, if bittersweet, note.

Miou and Haruki get the time they need alone together and write all their dreams on the chalkboard, emulating the promo art with one important difference: a tiny “I love you” Miou rights just out of Haruki’s sight.

The two also avoid closing that 10cm gap they’ve always had, knowing that if they did, they’d likely never let go. That is, they’d never give each other the time and space to realize their individual dreams. A very mature move by both, and one that pays dividends later on.

Much, much, much later on, as in SEVEN GODDAMN YEARS LATER. Sheesh, what is it with these Fall romances and their huge time jumps? And here I thought Just Because!’s month was a long time!

At any rate, Miou is a mostly content art teacher at her old school, Yuu proposes to Natsuki in one the most adorable scenes of the episode, and even Souta and Akari remain a strong item. Miou’s friends worry about Miou, but Miou said she’d wait for Haruki, and wait she does.

Fortunately, all her waiting doesn’t come to naught, as the moment Haruki wins a rookie director’s award in L.A., he’s on the first plane back to Japan to tell Miou first (though Miou already finds out through Natsuki).

Despite the well-known amount of, er, temptation in the Hollywood scene, Haruki kept his head down the whole time, and was there to work and realize one of his dreams. And he missed Miou as much as she missed him.

At the top of the steps where they always sat 10cm apart as kids, they confess their love as grownups, and finally, mercifully, close that infernal gap with a hand-hold and a smooch. Medetashi medetashi!

And that’s a wrap for Fall 2017! I should hope so; it’s literally Winter now, and frikkin’ freezing to boot. Thanks for reading! We’ll be back in action soon checking out the new shows Winter 2018 has to offer.

Hina is the focus again this week, and the show is all the better for it; it’s good to see that while he still has plenty of doubts, in this situation Rei is the one who isn’t emotionally at sea, and even has a concrete path he’s following for the sake of the girl who saved her. Hina has been all but a co-protagonist this season, giving Hanazawa Kana some really good material to work with and simply letting her do her thing.

In case her middle school life can never return to its former normalcy (and even that was a bit of a charade), Rei continues to familiarize Hina with shogi, which served Rei well in the past as an escape from unfavorable conditions, and is now the game that pays his bills. Rather hilariously, Rei proves as bad at going easy on Hina (even though he’s trying) as he is good at competing professionally.

Sitting alone with Hina in her room (for the first time), Rei feels it’s a suitable time to ask Hina to tell him, in small bits, in her own time, what’s going on at school. Hina describes, among other things, an oppressively awkward and hostile atmosphere and “an invisible hierarchy” in which “your ranking decides how loud you can laugh or how much freedom you’re allowed.” In other words, every damn middle school classroom, ever.

Of course, not all classrooms are like that, but by no means an uncommon atmosphere, and both Hina and Chiho are partly victims of bad luck, and partly victims of their own selfless personalities. While changing that atmosphere may be nigh impossible, it’s much easier to bypass it.

Takahashi asks for Hina by name and invites her to play catch with him during lunch. He tells her Rei came by his house to play shogi with his dad and granddad—a granddad usually bedridden, but a spring chicken before Rei and a shogi board.

In any case, Takahashi understands the situation, and tells Hina if the classroom is ever too much, they can simply play catch. Hina is overjoyed.

The joy—and the prudence of Rei involving Takahashi—is short-lived, and the bullies escalate by scrawling slurs on Hina’s desk (albeit in chalk; these girls aren’t yet to the point where they’re gouging the wood).

Their leader also calls Hina a bitch under her breath, but Takahashi seems to hear it, or at least can read the room, then invites the three hellions to join him and Hina in their game of catch.

Before I could ponder whether Takahashi was trying to quell the conflict through inclusion, he unleashes some game-level heat at the fawning bullies, sending them running off.

Then Takahashi tells Hina why he did what he did: Chiho once gave him half of her lunch when his bento box fell in the dirt. He knew then, as he knows now, that anyone who shares their food with you is a good person, and he doesn’t think Hina should be afraid to show she has allies in this war. 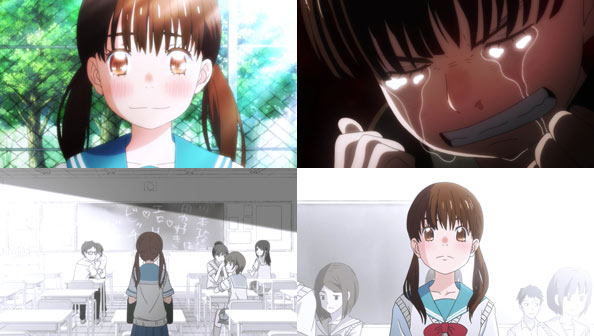 It’s sweet, sweet revenge and a wonderful sentiment, but I knew its effects would be temporary, and perhaps even cause further escalation. That night, while playing shogi with Hina, Rei apologizes for introducing another element into her problem so recklessly.

But Hina is grateful for everything Rei has done, and is happy he is always asking her what she wants. She’s just frustrated that she doesn’t know…or that she does know, but knows there’ll be no turning back if she does that, because two wrongs don’t make a right and such, right?

Rei has always felt that Hina is stronger than him, and he’ll never surpass her in that regard. The bullies may be having their fun drawing awful stuff on the chalkboard, but they’re not just causing Hina pain…they’re making her mad, and toughening her. Rei realizes that his pacifist nature may not apply to Hina, and that simply becoming invisible, shuffling off to stare at bushes or play shogi may not be the best options for her.

So when the teacher asks Hina for an explanation, she stands tall, proud, and tearless, and tells the truth: she doesn’t know; she didn’t write that; it was written there before she came to class. The teacher seems to remember the Chiho situation she handled so badly (Chiho is now in psychological rehab, unable to even respond to Hina’s letters). One can hope she’ll handle things a little better this time.