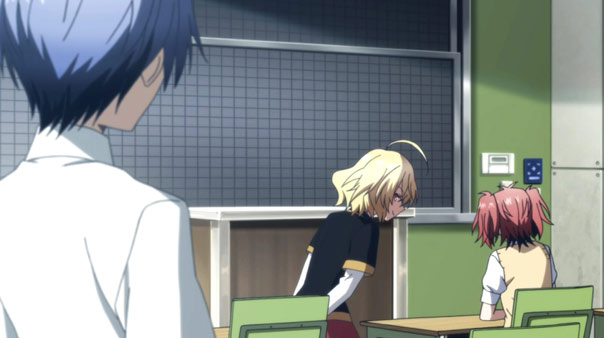 With all of the assassins defeated save Nio, the rhythm of the show changes this week. Instead of trying to figure out who’s going to target Haru and when, she and Tokaku are rewarded for their victory with a “true orientation” that reveals big, hard truths, most of which had been hinted at, but now brought into the light.

Now theres no more doubt: Class Black wasn’t assembled to assassinate Haru, but to test her readiness to take the reins as the “Queen Bee” of the ultra-powerful clan that “controls every aspect of the world.” That last bit sounds kind of silly, but that doesn’t change the fact that it was a good test, and she passed it. 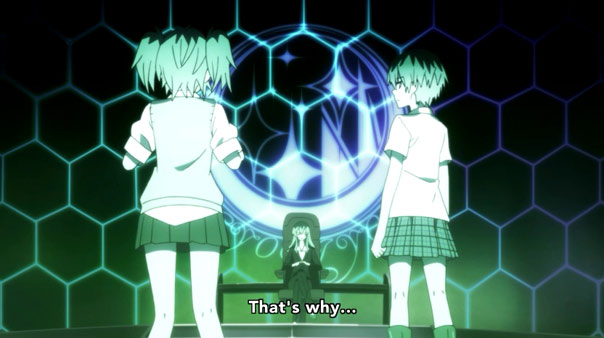 Unfortunately, the power and potential she exhibited in the process aren’t going to entitle her to the normal life she wants so badly (and apparently had earlier in life), but condemn her to serve. A Queen Bee isn’t designed to live for herself, but to ensure the survival of the hive, even at the cost of her life. Nio drives the point home by taking Haru to a massive clan graveyard deep below the school, full of people who died for the clan’s survival.

Nio continues to glare and bare her teeth from time to time, but her true motives are still a mystery. Could it be she too is a potential queen, who will kill Haru and ascend if Haru refuses to accept her fate? A few moments of apparent sincerity aren’t enough to make me forget about all the two-faces we’ve already encountered and trust her. She’s still dangerous. Otherwise, why would she have those awesome tattoos?

Tokaku doesn’t take these new revelations well. She’s been lost all this time trying to figure out the toughest riddle of all; why she wanted to protect someone she was told to kill. She has no way of knowing whether her relationship with Haru was nought but an artifice built by Haru’s innate charisma. Whether she used it to manipulate Tokaku consciously or not is beside the point; it’s possible; likely even.

It’s with that in mind, and with a great appreciation for the things Haru made her feel and think about for the first time, that she decides to turn on Haru after all. Kaiba tells her the riddles he’s sent have no right answers. Really, they were meant to spark independent thought. After a life of completing tasks and following orders to the letter, Tokaku’s time with Haru and the other assassins has taught her a great deal.

This wasn’t just Haru’s initiation, then, but Tokaku’s as well. Haru’s purpose was already determined from the start, and Class Black was just a means of validating it. But for Tokaku, Class Black helped her define herself and her purpose. Haru never really needed Tokaku’s protection, but becoming allies facilitated Tokaku’s advancement to where she is now: in the ideal position to eliminate the target.