How long do we have to wait to get the martial arts tournament started so Saitama can start plowing through the brackets? Apparently another half-episode, as we focus on a growing preponderance of monsters and demons throughout the lettered cities.

As for Metal Bat, he seems to get more “pumped up”, and his attacks faster and stronger, the more Garo beats him up, but ultimately the fight is called on account of Bat’s brave, protective little sister Zenko. Garo may claim to be a monster, but he’s not about to hit a kid. 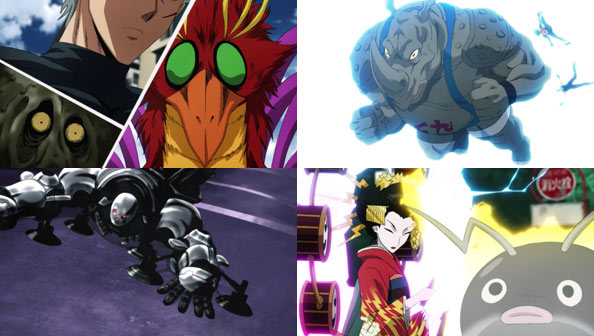 Shortly after taking his leave, Garo is approached by three monsters hoping to recruit him into the “Monster Association,” but he’s having none of it. Class S Rank 6 Metal Knight comes in to take care of the giant centipede, but even he just can’t summon enough firepower to dent the thing, making the battle a draw.

The jellyfish, phoenix and rhino-themed baddies make off with the rich kid, while other monsters start fighting—and beating—heroes they’ve chosen specifically because their heroic attributes favor them, the monsters. The Hero Association (still pitting their hopes that King will be a factor) are starting to panic.

Meanwhile, yes, Super Fight 22 finally commences, with the eighteen challengers being introduced; and they’re all quite the colorful characters, with equally colorful-sounding martial arts schools.

Zakkos is Saitama’s first opponent, but there’s a match before theirs. Sourface reveals he’s twenty—younger than Saitama—which explains both his pre-match nerves and his thin skin when Zakkos rips into Bang’s dojo.

Saitama, older and wiser, simply lets Zakkos say what he wants; he’s here to fight, not argue. Oh, and Saitama apparently doesn’t have to hide his face, as Sourface seems content that he is indeed Charanko and not some impostor.

When a particularly sexy monster, Super S, starts whipping heroes and making them her love slaves, it’s up to Hellish Blizzard and her crew to sort things out. As for Saitama’s first “match”, it’s a laugher; Zakkos was all talk and is in fact incredibly weak; so weak that the person he was to propose to didn’t even bother showing up to watch him. Bummer!

As for one of the higher-seeded martial artists in the fresh-faced Suiryu, he recognizes that Zakkos had some okay moves, but his opponent “Charanko” was just too strong. He looks forward to seeing him in the final.

While it’s always fun when someone comes around who can either absorb Saitama’s punch or deliver a blow that actually bothers him—wait…has that ever even happened?—I doubt he’ll meet his match here, especially considering how easily he dispatched Garo. Still, watching him effortlessly wail on guys is never not fun. 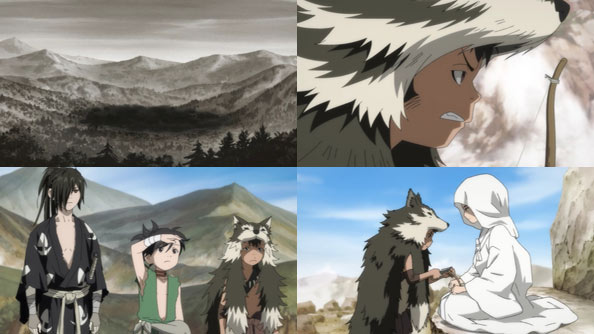 There’s no shortage of accursed demons out there, and this week’s nasty customer happens to periodically terrorize a village by casting a giant black cloud of miasma and then threatening to eat everyone unless they provide it a “bride” in the form of a young woman…willing or not.

In this case, the young woman is willing to sacrifice herself for the rest of the village, but her “brother” (from another mother) Saru doesn’t agree. Dororo and Hyakkimaru agrees to help him deal with the monster, so they can free his sister, even though she’s already resolved to die.

When the demon, a giant centipede called Nokosaregumo, casts its black cloud, it presents a unique challenge to Hyakkimaru: the entire cloud reads to him as a demon, so he’s completely blind when he’s inside it. While he tries in vain to locate it, the monster goes after Saru, but his sister pushes him out of the way and gets swallowed up, defiant smile and all.

Saru is devastated; other than his deceased mother, no one other than his sister ever treated him with as much kindness. Dororo assures him he and Hyakkimaru will stick around, though due to the latter’s blindness in the cloud, the two boys will have to get the job done without the most skilled warrior.

Again Dororo demonstrates his ease at making friends, especially those around his age, though after hours of casting rocks at the same spot, Hyakkimaru checks on the lads and discovers that both of them are crying in their sleep. 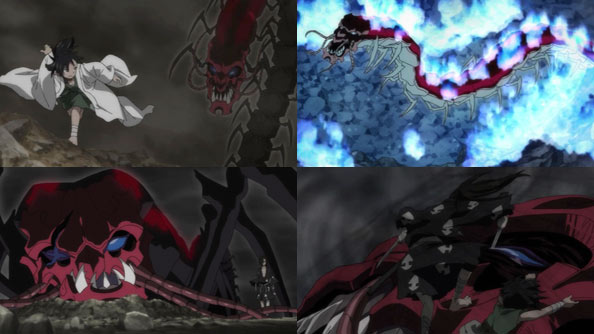 The next day, Dororo poses as a bride, tricking the Nokosaregumo and drawing it into an area of flammable gas that Saru ignites with a lit arrow. However, the centipede’s carapace protects it. It’s up to Hyakkimaru to take care of the rest, using arrows and then the sound of his and Dororo’s voices to locate the proper direction to rush at the monster and take out its eyes with his arm-sword.

With one of the heads destroyed, the second head on the other end snaps Hyakkimaru up whole, but he simply slices the guy clean in half from within, completing yet another imaginative, unique battle that required overcoming his inability to properly see while using his still-new hearing.

As an added bonus to the demon being defeated, Hyakkimaru gets his sense of smell back—just in time to enjoy the harsh stink sulfur. Saru’s sister also survived—they killed the monster before it could digest her—and the two decide they’ll live together in the village from now on, after both being alone for so long.

Dororo and Hyakkimaru’s payment may be modest—a small nugget of gold, some grubs, and a flower from the woman—but the flower proves quite the treasure for Hyakkimaru, considering he’d never smelled anything like it before. He’s so excited, he actually says Dororo’s name when he passes it to him, bowling Dororo over. Here’s to Hyakkimaru finally adding to the conversation on their future wanderings. 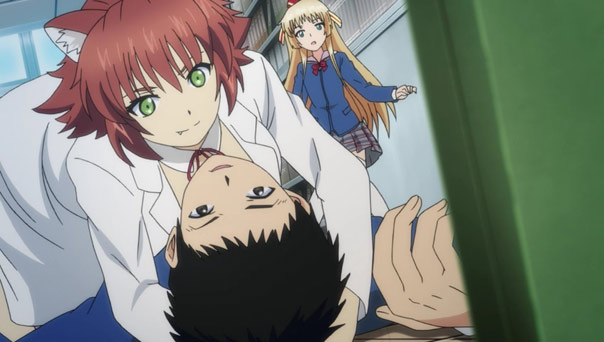 Every once or twice in a decade, the fates conspire to bring us a truly great and unique work of art that is so bowl-you-over astonishing, it captures the imagination of the entire planet. I think I speak to all who have experienced it that Isuca episode two is that…and more. 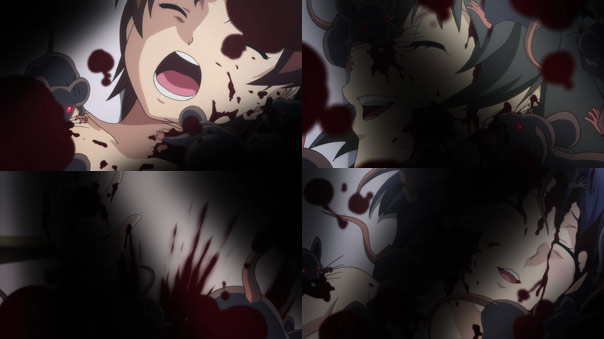 High school girls undressing in the locker room? Pretty standard fare. But a carpet of rats suddenly bursting out of a locker, knocking the half-naked girls over, and proceeding to eat them alive as they’re sexually aroused? We’re at the pinnacle, ladies and gentlemen. Savor it…for it will never be this good again.

Yes, that review above was just an illusion, borne from ISUCA sucking your life force right out of you. In reality, Preston has punted this to me. The thing is, it’s(uca) not as an excruciating ordeal as it sounds. This episode was mostly harmless, and surprisingly fun. Devoid of any semblance of weight or significance, yes; simple and innocuous, sure…yet sometimes rubbing up against something resembling slyness. In other words, it was a pussycat. A pussycat going commando.

Tama, the two-tailed cat specter Sakuya is about to pierce with an arrow last week, becomes Asano Shinichirou’s familiar when he happens to learn her true name, after recalling a stray cat in a box that he must have cared for. She tries to help him deal with the Rat King baddie, but runs out of go-juice, AKA life force. 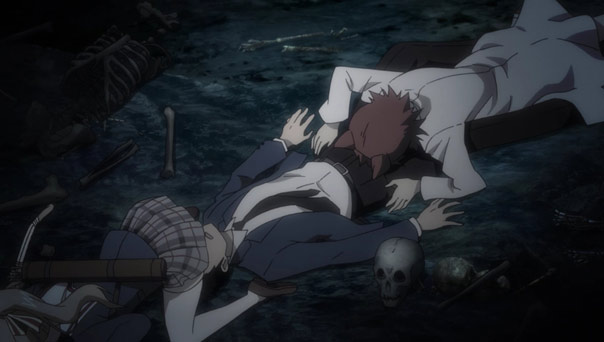 Now that is simply a masterful landing, worthy of song; not to mention Tusk’s approval. To not only land face up from such a great height without breaking one’s back, but to have one woman’s face land on your crotch, and another girl’s crotch landing on your face, all inches from the bones of eaten classmates…I ask you: What else is there to say? #weareallasano. 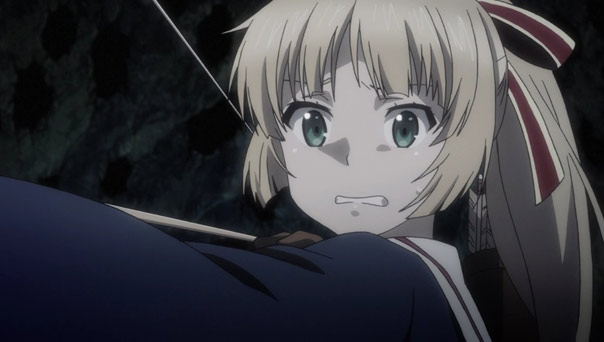 We learned from visiting her house that Sakuya is a hopeless slob, and so her and Shinichirou’s teacher (and associate of Sakuya’s family) appoints Shinichirou as her maid. But despite the squalor she’d lived in up to that point, she harbors an unreasonable fear or rats and cockroaches, rendering her fairly useless. This week she’s one of the people standing around while others do something.

And that something is…making out, complete with tongue and drool. ISUCA would be a pretty workaday fantasy action joint, only it aims to distinguish itself by inserting sex pretty much anywhere it can, like a shoplifter stuffing Slim-Jims into their many trench coat pockets. This is not a new concept. But even with the silly ecchi elements, the danger has a nice sharp edge to it. 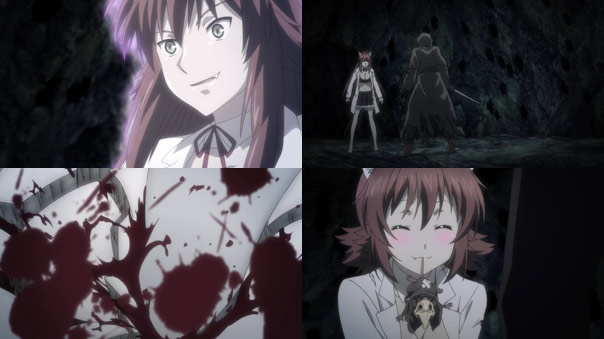 Shinichirou’s life force turns out to be SURGE to Tama, who takes out the Rat King with laughable ease, and a fair amount of badassery. Only, when she’s back to her normal self, she’s holding her pray in her mouth like a cat, proud to be presenting a gift for her master (I know, it’s debatable whether that’s what cats do, but let me dream, man!).

So we have Sakuya the Slob hiring Shinichiru as her housemaid, and Shinichirou having Tama, whom he names “Tamako”, as his eternal retainer, who’ll have to periodically make out with him to stay alive, which is a pretty good deal, as they’ve each saved each others’ lifes at least twice at this point. That brings us to the fact that Tama is Special; a vessel for freakishly high-level spiritual power. And he makes a mean stir-fry.

Wait…is that RAT MEAT? WHAT IS THIS, SKYRIM?

The rundown: One night Asano Shinichiro is captured by a specter but is saved by a mysterious ponytailed archer, who turns out to be his classmate Shimazu Sakuya, head of a clan tasked with sealing specters. When a powerful specter attacks the school, Sakuya is overpowered (and stripped down), but Shinichiro is able to rescue her. After they accidentally kiss, she levels up and successfully seals the specter.

What worked: Frankly, not a lot. After watching an episode of the caliber of Tokyo Ghoul, ISUCA felt a bit…lobotomizing. The properly creepy centipede woman marks a promising start. There were also a few moments (just a few) in which the dialogue reached that difficult-to-nail Akame ga Kill! combination of peril and comedy. I also liked the two-headed cat design. 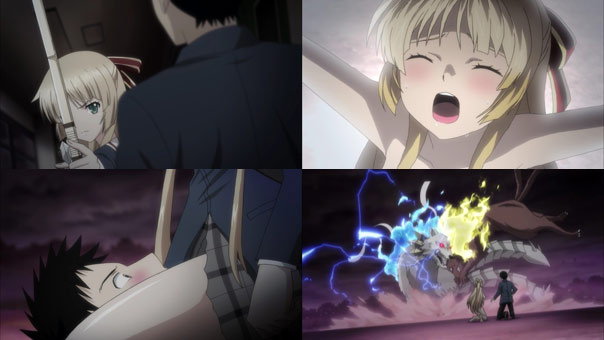 What didn’t work: Hmm…where to start? Well, how about the beginning: We get a woman flashing her (censored) boobs in the first ten seconds. The school scenes prior to messed-up things going down are pedestrian at best. Shinichiro is a fairly valiant fellow and Sakuya is feisty and cute, but let’s not kid ourselves: we’ve seen these archetypes umpteen times, and ISUCA brings essentially nothing new to the table.

I won’t decry the abundance of fan service, seeing as how that’s one of ISUCA’s listed genres…but there was an awful lot of convenient physics in play, from lightning with the precision of a tailor to the face-crotch and kiss-fall. Also, the fact that having the life sucked out you being a pleasurable experience is clearly a shameless excuse for Sakuya to tilt her head back and make funny noises.

The verdict: ISUCA has a few moments that are genuinely fun and entertaining, and quite a few more moments that are either exceedingly dumb or derivative or both. The ecchi elements vary from eye-rolling to smirk-worthy, while animation varies from crappy to passable.

I won’t be overly hyperbolic: this show wasn’t patently terrible, just…disposable. It’s just not anything that sets my heart ablaze. I’ll have no trouble waiting for the next episode. It’s watchable…if nothing else is on, and I don’t feel like using my brain for a half-hour.