Black Label, a secret group of vigilante surgeons, some of whom may still actually be high school students, fight back to remove evil from the body of their City. With guns, cool motorcycles, and bulletproof helmets.

But their coolest dude appears to be living on the edge, not following the rules. Little do they know, he’s talking to the childhood ghost of his dead friend. 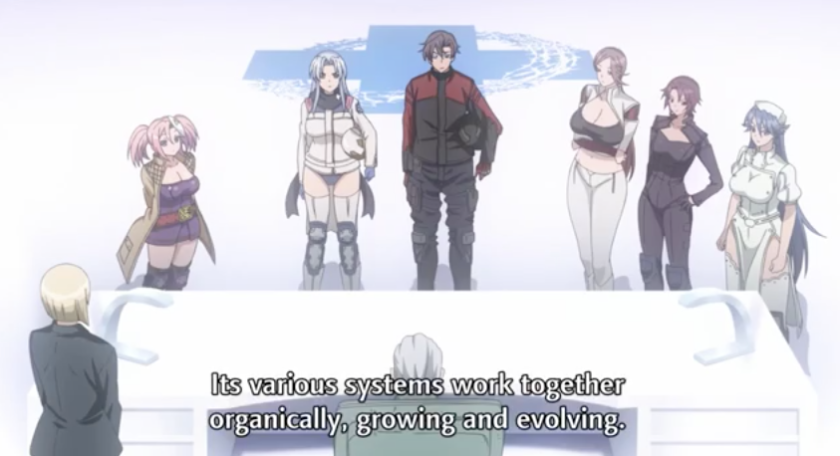 Also, his body is made from parts of that dead friend’s body, from when they were both blown up by terrorists who bombed a medical conference…

Triage X is a stupid, exposition-you-to-death, juvenile show pumped full of boy toys and boobs to look at. Except it’s heavily censored.

You may like Triage X: if you enjoy the secret lives of high school students with big breasts who fight crime after school. If wait for the BluRay, you’ll even get to see a fair amount of those boobs too.

It’s not drawn badly but it has a 90s feel to it that reminds me of BurnUP and other ‘extreme’ cop and robbers shows. For better or worse, the vehicle and weapon design got plenty of attention. 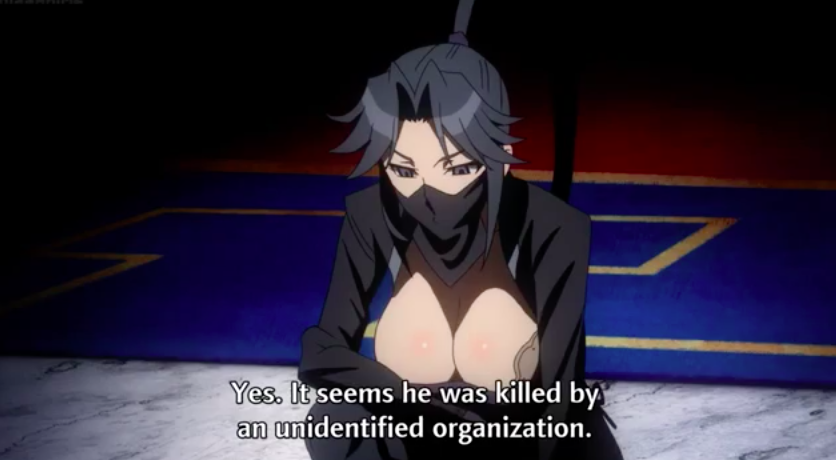 You may want to skip Triage X: if high school angst, love triangles, and having plot and characters endlessly expositioned at you isn’t your cup of tea.

Most likely, you’ve seen something similar before. Worse, so much is thrown at you in the first episode that I found no ability to empathize with any of the characters specifically. I didn’t even realize one of the high school girls wasn’t part of Black Label at first.

Honestly, I don’t see any reason to follow this show. It isn’t terrible-looking, but the censorship ruins it’s base-appeal, and the so-evil-it-hurts villains are as over-designed as they are dull. Dull dull dull.

Fumito reveals himself as the mastermind of Saya’s entire ordeal. He captured her, a being with the strength and abilities to go toe-to-toe with elder bairns, but rather than human blood, she feeds off of elder bairn blood. He made a half-elder bairn play the role of her father and created the whole shrine maiden artifice as a vehicle to propel her to fight the bairns Fumito sent at her. After killing all the cast save Amino, he escapes to Tokyo, shooting her in the face as she lunges at him…but the game he started isn’t quite over.

For those who wanted the bloodiest, most disturbingly goretastic finale, well, you got one; though most of that gore was covered up by censors. That’s okay, I just ate a rich dinner, and was thus relieved to only have to catch the gist of the carnage. I’m not sure if a future Blu-ray release will be uncensored or not, but if it is, I must remember not to eat a big meal prior to re-watching it. Notably, after making themselves far less likable last week, Nono, Nene, and Tokizane get their bloody, karmic comeuppance. But there wasn’t just grisly death on display; we were also treated to some exquisite Saya ass-kicking that got downright lyrical and reached a fever pace.

Fumito’s obviously an immensely powerful person, but also an immesely sick, disturbed, evil person, and the multiplying elder bairns he unleashes on the fake village to slaughter all the extras just drives that point home. That being said, he’s a human being. He doesn’t believe Saya can kill a human, but if ever there was one for whom she could make an exception, it’s him. This whole series could be boiled down to one, long, harrowing, emotionally and physically torturous practical joke played on Saya. Come next June, she’ll look to settle the score in the film that will wrap this story up.

Saya is good at killing elder bairns, and by extension protecting her friends and her town...from a distance. But as it’s been demonstrated, once an elder bairn has a victim in sight, Saya can’t do much to save them. She can’t fight and protect Nene at the same time. And so Nene becomes the first of Saya’s classmates to die. The scene is portrayed with all the necessary horror. We knew it was pretty much inevitable, but it still hurts to watch (though less bloody thanks to network censors).

Just when you thought, well, she has an identical twin, they wouldn’t kill off both in the same episode…well, they do. Nono doesn’t just die, she’s possessed by her own shadow while pleading for Saya to tell her where her sister is. The shadow consumes her and Saya, and when Saya defeats it, Nono is torn to pieces in a rain of blood. I cannot overstate the gruesomeness – especially when neither Nene nor Nono had anything to do with this elder bairn business until that cliffhanger. The contrast from the lighter moments of the series couldn’t be more stark. Hell, they couldn’t be more lannister.

Fumito is as creepily supportive as ever, Tokizane wants Saya to spill the beans about what’s troubling her, and that little doglike animal that’s been showing up so often finally talks to her, telling her to “wake up”. Saya is coming to grips with the fact she’s little more than a deadly weapon with no free will of her own, not a shield that can protect her friends. And I don’t think it’s helping her sanity. One thing’s certain: the lighthearted school moments are over with.