This week we’re introduced to Mizuno Ami (Kanemoto Hisako) and witness her progression from quiet genius girl, to brainwashed tool of the enemy, and finally to Sailor Mercury. This second episode also suggests the show wants to balance the main serialized storyline with smaller, more episodic plots. Like the first, it moves briskly and embraces the goofiness, even coming off downright cool in some moments.

The story of the week is that Ami, despite having perfect scores, is suddenly attending the equivalent of a cram school (and a very evil looking one, at that), along with an increasing number of students. Like the jewelry women last week, they all wander willingly into the trap, and then the enemy has them. Unlike Usagi, Ami is first conscripted by the enemy, albeit after she’s brainwashed. 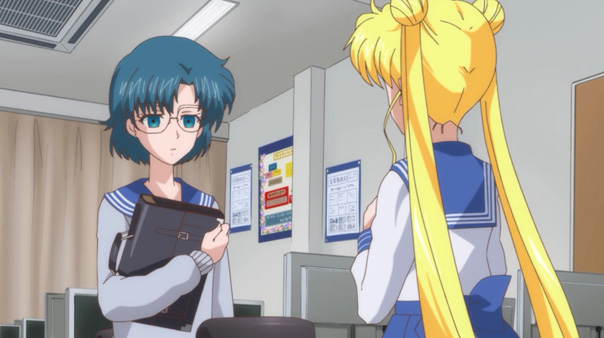 Yet again, Usagi’s weaknesses as virtues: just as she was too poor to buy any evil jewelry, she’s not…ahem…academically inclined enough for the brainwashing CD-ROM(!) to work on her (i.e. girl dumb as brick, yo). But this episode showed that her most powerful weapon wasn’t her crass materialism, ignorance, or quickness to tears: it was her profound kindness and loyalty.

While other classmates were intimidated and stayed away from Ami, Usagi, after Luna provides an opening, extends a hand of friendship. Having just become a sailor guardian herself but discussing it with neither family nor fiends, Usagi gets that there’s more to Ami than her cool exterior. Sometimes it takes a fluffy black kitty to bring out one’s warmer side. Unless one’s allergic. 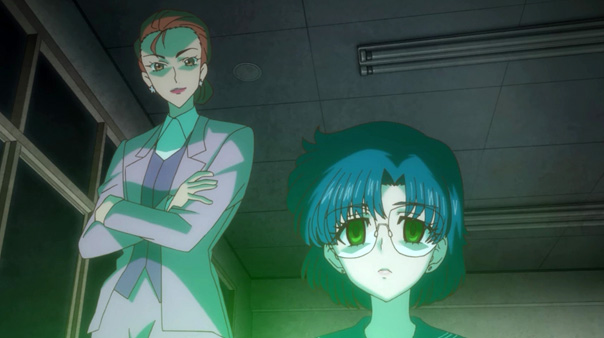 Usagi’s kindness gets through even to a heavily brainwashed Ami under duress from the fake teacher (though it’s ironic Usagi warns Ami while dressed as a fake doctor). The teacher is really a demon servant of another servant of Queen Beryl. The higher-ups seem to employ a lot of delegation rather than doing things themselves. 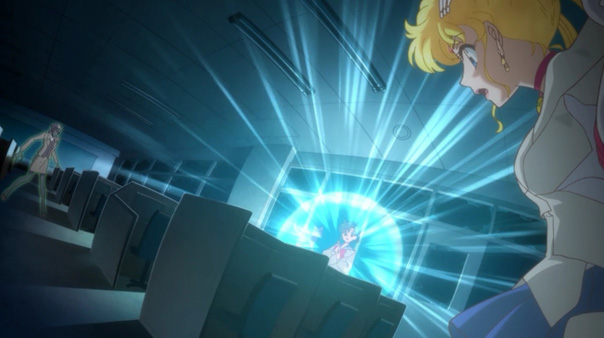 That strategy is looking increasingly flawed as the Sailor Scout ranks expand. When Usagi transforms into Moon and gets whaled on by the demon, taking blow after blow for Ami’s sake Ami snaps out of it, produces the pen she won at the arcade, and then we get the second elaborate CGI sailor guardian transformation, that of Ami into Mercury…Game, set, and match.

Mercury commands water, which makes sense with her delicate yet ambitious personality, and creates a fog that gives Usagi the chance to slice the demon in two with her boomerang. Tux Mask gets an assist as well, but only Usagi sees him and he vanishes quickly thereafter. Luna—ever the Good Kyuubey—rejoices that she’s found the “brain” of the group. Usagi and Ami seem more happy about the fact they’ve made friends.