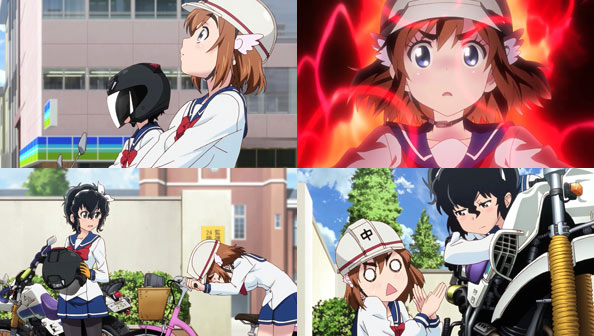 All it takes is a particularly steep hill on her way to school, and the sight and more importantly the sound of a motorbike being ridden by a classmate, for Sakura Hane to enter the world of bikes.

She doesn’t have a particular passion for the machinery, nor does she want to start riding because it’s badass and liberating. At least at first, her motives are purely practical: she wants to get up that hill.

Amano Onsa, the frizzy-haired classmate who introduces her and welcomes her with open arms to the world of bikes, is into bikes because she’s passionate about the machinery and thinks its badass, and furthermore thinks she is a badass for riding a Yamaha Serow Mountain Trail 225. She’s eager to convert Hane to her church.

Naturally, since this is Japan, there’s a club for that. Only problem is, the sole member of the school bike club when Onsa and Hane arrive is an initially terrifying senpai wearing a Simpson full-face helmet, a la The Stig.

This girl, whose name is basically “Lime Kawasaki” because her ride is a Ninja ZX-12R, does not speak and has no seiyu, which is fine, because Uchiyama Yumi and Ueda Reina do fine enough work as Onsa and Hane, respectively, for Lime to keep quiet.

Lime holds her own with her actions. As Onsa goes off on some monologue, Lime puts Hane on the back of her Ninja and takes her for an exhilarating spin. During the ride, Hane gets that feeling, and from then on, wants to ride a bike of her own. 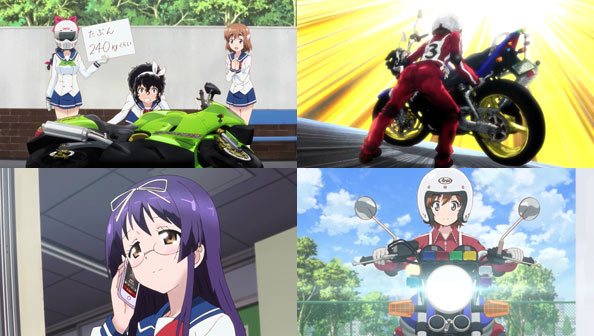 That means getting her license, which means, among other things, having to learn how to properly lift a bike that’s fallen on its side. She masters that once she starts to hear the ranchy voice of the training school’s Honda CB4ooSF, “Baita,” and takes a shine to the durable, no-nonsense machine. Another classmate catches sight of the bike club in action and looks poised to join in on the fun. 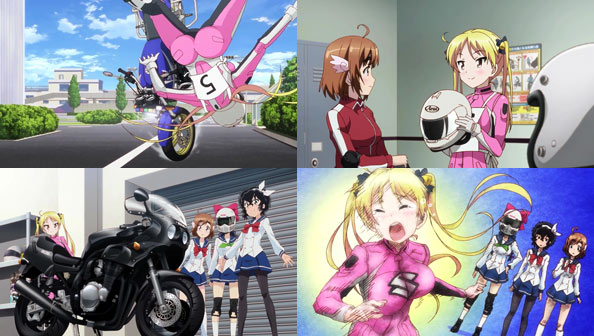 The club swells to four—I think?—with the introduction of Suzunoki Rin, who is absolutely obsessed with Suzukis, and worships every one they see at the dealership while the club is looking for a bike for Hane. Hane is fine with a Honda. Onsa and Rin share the opinion that Honda’s are competent but soulless machines of orthodoxy, they totally disagree on the coolness of Suzukis, creating an early rift.

Hane seems to bring Rin back into the fold, but just as Lime was the one who actually got Hane interested in learning to ride, Hane is sure to be the mediator between the strong personalities of Onsa and Rin, breaking up many a fight between her two new friends may be in her future.

Bakuon!! is a slice-of-life that’s very dense in details and procedures, specifically those of motorcycles. Like One-Off, it could be dismissed as another glorified commercial for various perfectly-rendered motorcycles currently for sale (though they’re not all Hondas this time).

But I don’t care. I like shiny machines that go vrroom…or in this case, bakuon, and while this episode felt a little overstuffed and drawn out at times, it was mostly just a lot of fun, so I’ll be watching next week to see what comes next for Hane & Co.