Ugh…I think I’ve had about enough of Comet Lucifer. One can’t dispute it’s plucky and full of joie de vivre, but no amount of pleasant roof repair antics or Disney-style vegetable dances are enough to make up for the abject stupidity of both the good and bad guys.

Gus is on the phone most of the episode, pack just wants to cut everything, and Alfried is a no-joke pedophile. I lump Gus in with the other two stooges because he assembled this dream team. Roman shows up to the cafe aboard a giant mecha that looks ready-made to cause more damage to it, brings a cow which is supposedly slaughtered off-camera for a barbeque that night, though we later see the cow still chained to a fence. Is anyone feeding it? At the barbeque, Roman tries to force Kaon to eat meat, causing her to run to her crush Sogo, who isn’t emotionally available. 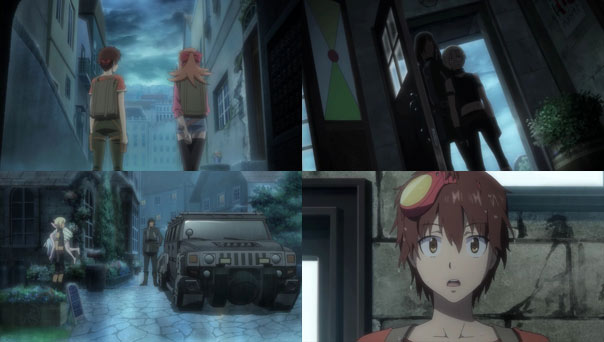 Then the storm arrives on a day Kaon and Sogo go to school. Really? School? We haven’t seen them go to school once this whole show, and now the show wants us to believe they have to go at all costs? But by far the dumbest blunder by any character is Do Mon going out to help batten down his crush Vee’s house, leaving Felia all alone in the opened Cafe.

Sorry for all the italics this week, but does no one remember the events of the last three episodes? Or that Felia is a child who shouldn’t be left alone under any circumstances? Nope, they leave her alone, and Alfried’s surveillance leads the baddies right to her. Sogo runs away from another awkward moment with Kaon, right past the Hummer she’s in, runs in the cafe, and simply stands there with his mouth hanging open.

And don’t get me started about Telescope Guy.

After plucking their host’s last straw by knocking over his perfect pot of curry, Sogo, Kaon, Felia, and the very irritatingly-voiced Moura are kicked out of the cafe, which thankfully still shows signs of the damage Moura caused. They take Felia downtown and show her the sights, and we get a very pleasant, detailed, yet wordless montage of their fun, and likely expensive, day to keep Felia entertained.

Everything is chipper until in her excitement Felia bumps into a passerby, sending her pigeon-cat cake flying. She tries to use her telekinesis to save it, but Moura startles her, and the cake is dumped on a purple-haired cafe patron, who seemed annoyed but not unreasonably angry with the incident. Turns out he’s a master hacker-terrorist who has been watching Felia for some time, and judging from his expressions and gestures in his dark office, he’s also quite unhinged in the “creepy unhinged villain” kind of way.

In order to induce as many expressions of fear and worry on his “mademoiselle” Felia (which he watches with relish on cameras, which…ew), he throws the entire city’s traffic control system into chaos, thus turning the city into a game board and the kids game pieces he moves around by controlling the ample technology around them. Even Gus and his blonde buddy aren’t immune from the disarray.

But every time the Bad Guy tries to close in on Felia, Sogo and Kaon split up and misdirect and serve as decoys to keep him off balance, until he gets angry and steps up his game, activating a spider-type mecha to pursue Kaon and Felia on a cable car. Sogo gets as high up into the air as possible and Kaon throws Soura to him, activating Soura’s mecha transformation.

Once Soura is in play, it’s Game Over for the bad guy, as his mecha is beaten back and the cable breaks. Felia uses her “force power” to give the cable car a soft landing, while the bad guy falls victim to the cable’s recoil, which gives him a reverse mohawk.

The physics (magic hoverboards and telekinesis aside, of course) were pretty solid, right up until here; such a huge cable would surely have taken off his head, if not more. Instead he gets an old-style anime villain comeuppance, even though he surely put dozens of people in the hospital with his reckless antics…all for his personal entertainment.

Even the most gorgeous sunsets of the Fall season can’t save this episode, or this show, from the inescapable fact that it is artful, attractive, and often thrilling (and thus watchable) but utterly lacking in substance, making it my Fall guilty pleasure. It’s cotton candy; empty calories with no payoff; a bunch of elaborate fun stuff that happens, and then it’s over. Sure, Alfried joins Gus’ dream team, but we just saw Alfried fail miserably to a couple of kids, so it’s not like he’s that much of a threat. He’s just an overwrought creeper.