Here it is: the last episode of the Winter for RABUJOI, ending it with, well, not a whimper, but not really a bang either. The show was clearly never interested in brining the candy shop succession plot to any kind of resolution, and so instead stuck to its usual formula of crafting a slice-of-life skit around particular brands or types of candies.

Specifically, Saya is momentarily freaked out by the possibility of having a yuri moment with Hotaru, who asks her about the “flavor of love”, but she’s only talking about a cherry candy with a poem on the package called Sakuranbo no Uta. Meanwhile, Koko and Tou have a very over-dramatic exchange about the proper use of fortune-telling Taberun Desu Hi candies. 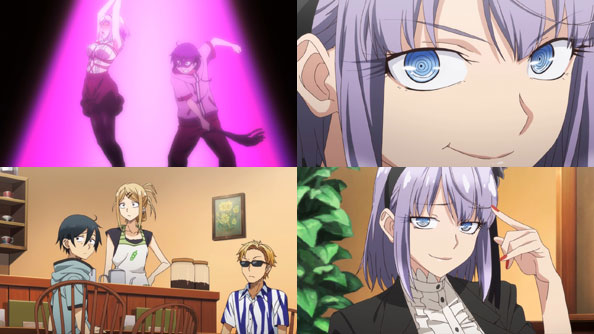 The next skit is devoted to Morinaga Milk Caramels, with Hotaru sitting in the smoking section of Saya and Tou’s family cafe as a kind of acknowledgement that they used to be marketed to adults as a tobacco substitute.

Mind you, before she comes in Koko is worried about “tying down” Hotaru with his indecision about succeeding the store, which Saya incorrectly imagines to be bondage. But Hotaru leaves impressed that Koko fulfilled her expectations, talking about the caramel’s history and mentioning its many flavors, including coconut.

The final skit is notable for its visual beauty as well as the transformation of the weather from beginning to end. While running after Hotaru to talk to her about his concerns, it starts to rain hard, and the two end up sheletering at a bus stop. There, Hotaru tries to break open a tin of Sakumashiki Drops, but can’t get it open; Koko pries the top with a 10-yen-coin, amazing Hotaru.

Then he tries to put the peppermint flavor drop he gets back in the tin, which Hotaru stops him. He tries it, and it turns out to be much better than he thought, which is again what Hotaru wanted him to realize: one has to try new things to be surprised.

As for tying her down and keeping her from her own business, Hotaru tells him that’s simply not the case: she’s in Koko’s town not just because she wants to recruit his father and get him to succeed the shop, but because she enjoys hanging out there; that’s all. He’s been overthinking things, and like overthinking this show, that gets you nowhere.

Rather than explore a combination of various confections, Dagashi Kashi focuses on only two this week; and one at a time. First is fugashi, the brown sugar-coated wheat gluten snack for which there are countless varieties. Hotaru decides she and Kokonotsu will do a blind taste test. 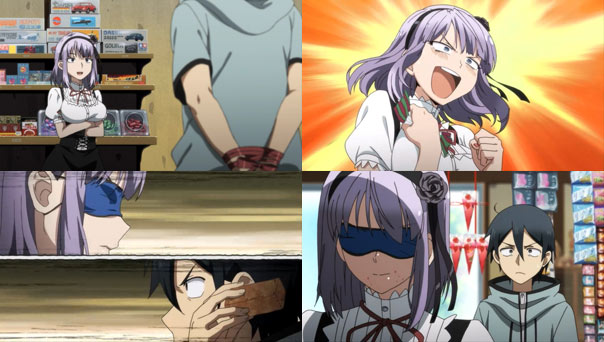 What with the blindfolds and the bound hands and the stuffing of cylindrical things down each others’ gullets, the exercise definitely has a suggestive, kinky quality to is, as Kokonotsu points out in his thoughts early on, but that’s tempered by the fact Hotaru is so darned innocent and oblivious and purely interested in the candy and the competition.

The second part is dedicated solely to Glico, a little box containing caramels that will each provide enough energy to run 300 meters. When Kokonotsu leaves his sketchbook at Saya and Tou’s cafe (containing an incriminating sketch of Saya that Tou edited to point out her slight chest) Hotaru suggests they use the caramels to fuel the 1,500m run to retrieve the book. 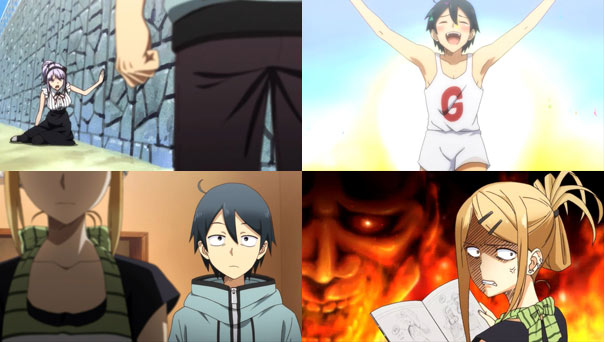 Nothing kinky about this segment, but like the fugashi competition, the proceedings grow very dramatic as they progress, with Hotaru and Koko performing great feats of athleticism while crunching the nitty-gritty numbers. However, they eventually tire, and Koko remembers Glicos only come four to a box, leaving him one short of the cafe.

Hotaru gives him her last one and demands he leave her behind to accomplish his goal. He reaches the cafe, but unfortunately, it’s too late; Saya sees the sketch, and no amount of explanation will quell her rage.

Poor Coconuts…never any luck! Were it not for Tou’s “adjustments”, Saya would have likely been moved by the portrait. Then again, a gorgeous rich girl constantly wants to hang out and do stuff with him, so maybe he’s not so unlucky after all…