While they’re a formidable duo when they’re on duty, I might just like Tilarna and Kei better when they’re off duty, as it presents so much more opportunity for the two to talk and interact off-the-cuff. And both professionally and personally, they’ve built up a nice rapport. Just take Tilarna using an elixer to eliminate Kei’s cat allergy, but not to tell him about it until he wakes up with Kuroi in his room and is breathing fine.

Even so, things only go so far, and Kei would rather continue to live alone, so he’s trying to find a place for Tilarna, with little success (realtors in San Teresa are apparently racist). And when their leisurely crepe lunch is interrupted by a stolen truck shearing off the side mirror of Kei’s car and he gives spirited chase, Tilarna would kinda rather be anywhere but in the passenger seat, losing years off her presumably otherwise extremely long life. 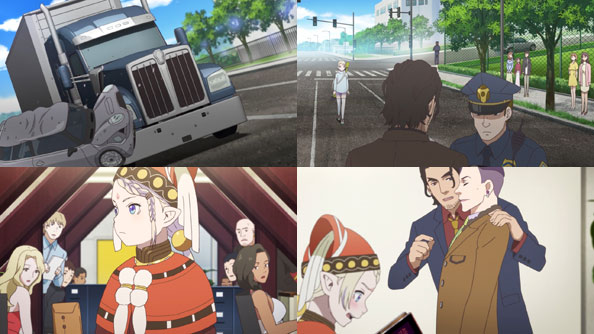 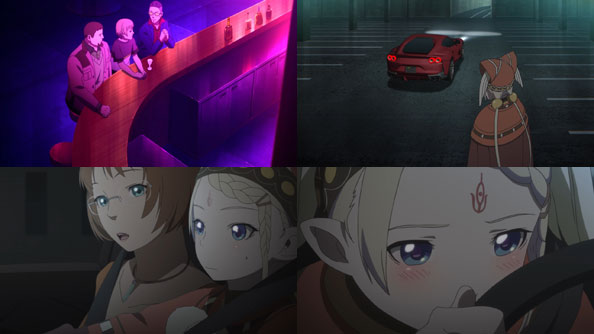 Tilarna came to Cecil for driving lessons unaware that “ex” meant “ex-lovers,” something that embarrasses her. When asked, Cecil isn’t sure whether she likes Kei, but she doesn’t hate him, and simply wishes he’d treat her as an equal rather than a kid, hence her desire to learn to drive. Cecil warns her that might be tricky, as there’s a good chance Kei sees a lot of his lively younger sister, whom he lost ten years ago, in Tilarna. They have tended to act like siblings, haven’t they?

What matters is, Tilarna doesn’t quite drive like anyone else Kei has ever driven with—which is to be expected—and she gets an absolute goddamn kick out of it; a true need for speed! It’s immensely fun to see the tables turned for once, and Kei begging for death and being given the option to jump out the car window. Tilarna launches the F12 like a projectile into the fleeing baddie, wrecking them both.

Thanks to modern automotive safety, nobody is seriously hurt and the perp is arrested. When Kei starts to scold her again, Tilarna speaks up for herself and gains a deserved apology from Kei for going too far about the Mini before. At this point he believes the Ferrari is still reparable, and agrees to go with her on more driving lessons, but it soon bursts into flames, GTA-style, and he’s back to the same blind rage and despair when his Mini was busted.

He eventually cools down, and when he arrives home (by bus) from a meeting with the real estate agent, he finds Tilarna has already made a cozy home for herself on the lower level of his house, and invites him in. Looks like he’s not going to get rid of her so easily…if that’s even what he wants at this point. After all, it’s not every day you get to have your beloved little sis back in the form of a knight from another world!

Satsuki holds the first “Naturals Election”, challenging all students to fight one another for their status. During the week of fighting, Ryuuko and Mako take a scooter to Ryuuko’s family home for clues, but find none. On the way home they run out of gas, but Gamagoori Ira offers them lift. The combined Automotive/Airsoft clubs ambushes Gamagoori, and Ryuuko and Mako watch as he employs his goku uniform’s “Shackle” and “Scourge Regalia” to defeat them. Back at school, the runoffs begin, culminating in a king of the hill-style final battle in which each of the elite four will fight Ryuuko, starting with Gamagoori.

As good as last week was, and while it developed Ryuuko and Mako’s friendship, it didn’t really progress Ryuuko’s central quest for answers regarding her father and Senketsu. It’s nice to see the Mankanshoku’s still recalling last week’s trials and being content not to participate in the fray. Ryuuko doesn’t have that luxury, however, as the only way she’ll get the answers she seeks is by beating the shit out of a lot of people. Satsuki used her and Mako to reveal the weaknesses in Honnouji’s power structure, and for that she’s repaying Ryuuko in a way by offering those answers. All Satsuki has to do is get through the Elite Four. Piece of cake, right?

Well, no. As we found out from the Sanageyama Uzu-centric episode, they are very tough customers indeed, and all of them grew stronger and more confident after meeting with Satsuki, as we see in more flashbacks. Satsuki makes the distinction between letting her powerful connections take care of things for her, or taking hold of that power herself and using it without holding back. And indeed, the former leaders of her junior high school were definitely the former. Depending only on others and not oneself is a weakness Satsuki has overcome.

We like how the bad guys on this show aren’t the bad guys 24/7, as demonstrated by Gamagoori helping out Ryuuko and Mako, and keeping them out of his fight against the Automotive Airsoft Club. It’s his duty to help fellow students in need—even those who openly oppose his beloved Satsuki—and it’s pointless to fight before it actually counts for something anyway. And the runoff election battle will certainly count. Ryuuko’s next four opponents have been lined up, and we know they’re no slouches. We look forward to the impending battles.

With half the SR Squad eliminated by Kasper’s team, Koko heads to Umihotaru with hers to seek out the other half. The designated meeting spot is a trap, and Jonah is ambushed. Koko and the others drive off, and when Tojo retrieves Jonah, he follows in a stolen car. A multi-car tunnel shootout ensues, ending when the vehicles exit the tunnel and Lehm, Wiley and Valmet mop up the SR Squad pursuers from a helicopter. After having their activities covered up, Koko and Jonah go to the Bahamas with Tojo, where he’s tracked down Colonel Hinoki – and the family he thought was a lie.

So, have we come out of this two-parter with a greater understanding of and appreciation for Akihito Tojo? Well, that would have been inevitable in any episode in which his past was brought up. We’ve only known him to be a calm, level-headed, generally decent sort of fellow who seemed more comfortable handling paperwork and diplomacy than guns and knives. Now we know he once had a similar role with Colonel Hinoki’s SR Squad, but became disillusioned. Little did he know Mr. Hino himself gradually got sick of the SR Squad too. When an opportunity arose to have it wiped out in the bloodbath his subordinates thirsted for, he took it. The other squad members took turns calling Tojo a traitor, but he didn’t really betray anyone per se. He stopped seeing SR as a place where he fit, and no one in SR other than Hinoki really ever liked him anyway, so why stay?

The organization got deeper into arms dealing and also grew more militant and chaotic. In hindsight, Tojo left a sinking ship, and left his mentor behind thinking their views had diverged. But it turns out everything Tojo assumed or expected about Hinoki – be it his actions or his motives – turned out to be the opposite of reality – his fake Thai wife is real, and he has an adorable daughter too. And at the end of the battles, Hinoki makes sure Tojo understands there’s something to be said for being the last survivor of the SR Squad, suggesting Tojo’s spy instincts and talent for survival are better than Tojo himself realizes.