Tetsuro uses Harmony to remove his own extension limits, enabling him to punch the shit out of Wachowski’s face. The old man then draws from the “every action has a reaction” speech from the Merovingian in The Matrix Reloaded, but Tetsuro is done listening to someone who has thought nothing of the pain and suffering caused to achieve his ends.

He also declines to finish Wachowski off, feeding him back his line about the ideals of men tending to change with time. Despite his scary extended form, Tetsuro neither fears nor hates Wachowski—in fact, he almost pities him. So he’s won on every front.

Well…not every front. Kunugi decides to inject drugs into his own fellow Spitzbergen member Shimazu in order to augment her—that’s right, HER—organic body in order to better fight the Gun Slave Unit. When those huge bazongas popped out of Shimazu’s armor, I knew we were going to have a Bashful Cartoon Juuzou reaction. It’s a silly but welcome bit of levity, though I wish so much NGL’s comedy didn’t rely so much on boobs.

But as averse as he is to hitting women, he doesn’t have much of a choice, so he swallows a bunch of cigarettes to counteract Kunugi’s drugs and brings Shimazu down. It’s here when Kunugi notes that Spitzbergen’s continued terrorism actually increased Berühren’s profits, since public support for self-defense by extension increases with each attack.

Kunugi reveals he was hired by Cunningham to keep that sick cycle of violence going, working against both Wachowski’s attempts at moderation and true believers like Shimazu who aren’t in it for the money. When Shimazu tries to attack him, her arm is sliced off at the wrist by Pepper…who thank goodness doesn’t proceed to compare their boobs.

Kunugi, Pepper, and Seven are all there to bring Juuzou down, but Pepper (with her seiyu Minase Inori really savoring a rare villainness role) admits that protecting a “weak asshole” like Cunningham and killing a “sad old man” like Wachowski isn’t her idea of a good time, just her nine-to-five.

Pepper also tells Juuzou that she knows the whereabouts of the Hands who abandoned him in the midst of bringing down the other Gun Slave Units. But she won’t tell him unless he beats Seven, something she doubts he can do without a Hands.

She also offers more than once, to become his Hands, a matter on which she and Seven vehemently disagree. The perpetually insecure Seven is so threatened by the competition he violently comes between the two, coming awfully close to hurting Pepper, who shrugs it off. I for one wouldn’t mind if at some point Pepper casts aside her loyalty to a corporation that doesn’t give a shit about her.

Juuzou doesn’t believe Pepper, but is so outraged that she’d even bring his Hands up, goes into no-holds-barred full combat mode. Pepper does the same with Seven, but then has to simply step back and watch as the two units go at each other in earnest with blinding speed and ferocity—kinda like the ED, but less informal street-brawly, more epic final-bossy.

Finally, Kunugi comes upon the injured, bleeding Tetsuro where Seven left him, but is confronted by Kronen in his first S2 appearance. The Corvette-loving cop isn’t there to bandy words with Kunugi; he’s there to “take responsibility for an embarrassing fellow pupil.” Of course, by his ultra-rigid code Tetsuro is also a criminal to be dealt with, but at the moment it can’t hurt Tetsuro to have an enemy of his enemy around.

From the beginning, Cross Ange has used difficult-to-watch, aggressive exploitation of skin that toes the line of outright adult content to make a point about racism and self-destruction. That skin-fueled message has (almost) always been the point though, and the creepiness has been relentless in forcing us to consider the very meaning of fan service, what it means and why we shouldn’t like it so much.

Not this week though. This week was just fan service, stretched like lovely skin over an empty plot about team building and waving away all of Ange’s enemies problems. 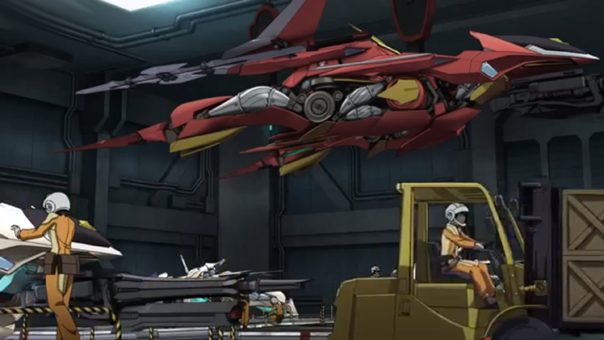 To sum up: Ange continues to defeat all the DRAGONs on her own, which means she’s ignoring orders and no one is making money. Team Hilda continue to try and shoot her down but are unsuccessful until Ange catches a cold. 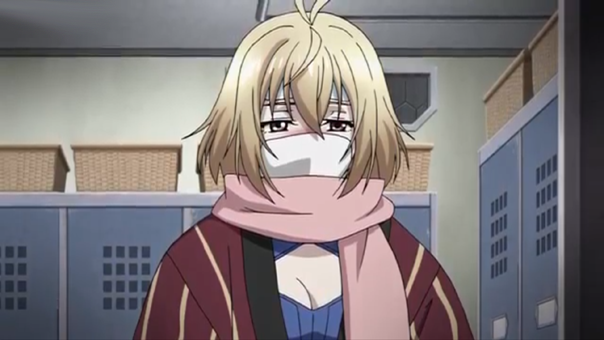 Then the episode devolves into a cliché-fest where the Salia finally realizes no one has died since Ange came back and that Ange is really good for them, regardless of following orders. Then they go on a mission and immediately get their asses kicked, until sick Ange comes to save the day. 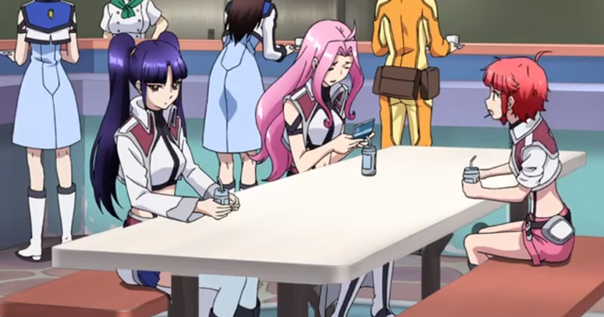 I would have a whole lot less against episode 7 if it wasn’t full of so much skin. (or ‘steam censorship’ equivalent to skin) There was just no point in having the girls fight in the bath nor have a nude bath party after the ‘we are all friends now’ battle. It was just skin and totally censored skin at that. 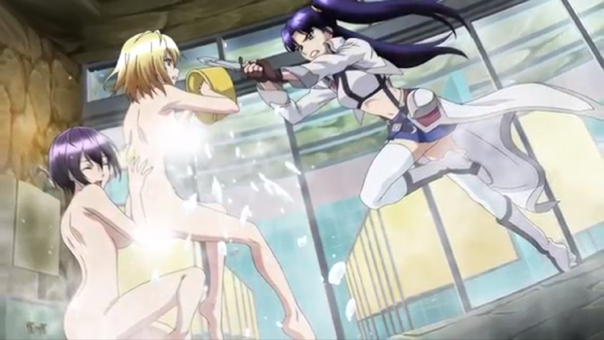 So I’m deeply frustrated at the moment. I’ve enjoyed Ange, and I don’t mind its graphic nature where and when it’s making a point but this makes two episodes that I’ve gotten to review that were utterly cliché, disposable exploitation bits without any value or creative point. 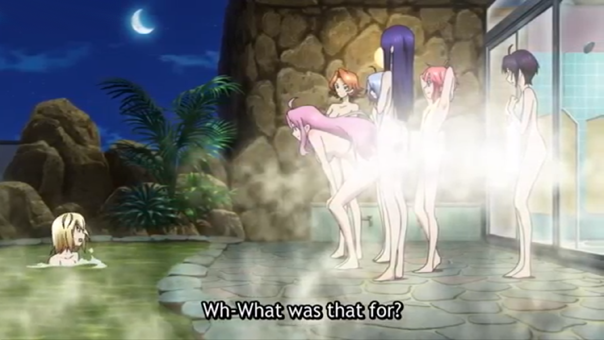 Sure, we get to know that Tusk is known by the prison’s command team and, during the credits, Ange’s sister some how gets a secret message to Ange that she needs help but so what? The only entertainment was finding out the captain is a cosplayer and Vivi is implied to be her lover… 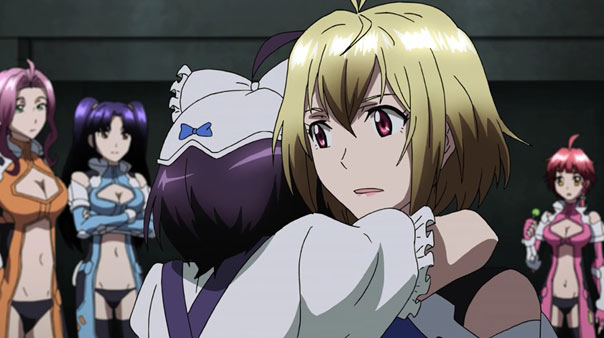 First of all, kudos to this episode for not bringing up anything about Tusk and his island…like, at all. Not that that episode was totally irredeemable, but it was pretty bad, and it was too soon to follow up on its events. This week was Cross Ange’s chance to show it could turn the page and move on, and to its credit, the show did just that. 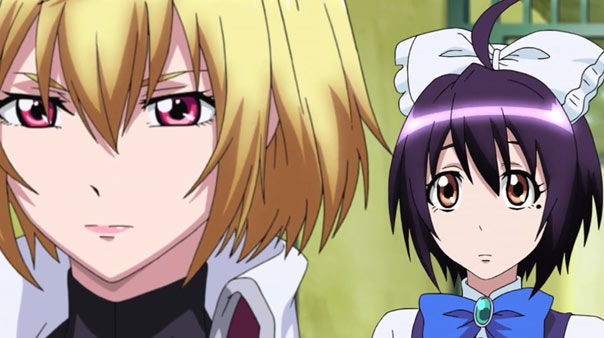 With that out of the way…Momoka’s Here! It’s the ep’s title, and it’s what we get: Princess Angelise’s Top Maid. A girl who grew up alongside the princess as she served her. An inconvenient, awkward, painful manifestation of a life Ange thought was dead and buried. A reminder of how weak and dependent and vapid a girl she used to be. But these are also reasons why Momoka works, where Tusk didn’t.

Bringing Momoka to Arzenal was opening a can of worms, but I like how they use her mere presence and a short talk with Ange to finally feed us crumbs (though not too much) of what happened to the Misurugi empire: In short, after the Angelise fiasco, it fell. Not that it matters to Ange: she’s ordered by Command to take care of Momoka for the duration of her stay, and that’s all. On top of that, Ange resents Momoka for knowing she was a Norma all along and lying to her along with everyone else…and yet even if Momoka was as in the dark as Ange, the fact remains ignorance isn’t innocence. 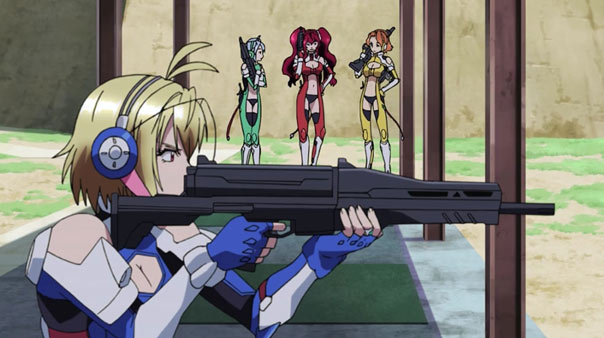 Momoka’s presence also gives the Hilda Crew ammunition, which they immediately pounce upon wih relish. They know Momoka’s a sore spot and drive their heels into that spot, reminding Ange that everyone who’s shown her affection has ended up dead. They also imply that Momoka’s life is already forfeit due to her exposure to Arzenal, the DRAGON, and the use of Norma to fight them – all state secrets the powers at be will jealously protect. As cool an exterior as Ange maintains, the barbs are enough to throw off her aim.

How can they not? Momoka reopened Ange’s old wounds, but she doesn’t hate or blame Momoka half as much as she blames herself, for everything from bringing about the downfall of her family’s empire to getting Coco and Miranda killed. She rejects Momoka’s use of her full name and service and ridiculous room improvements and even roast quail because she feels she doesn’t deserve them. She’d worked so hard to find a groove in her new life of subjugation and death, and then Momoka went and complicated everything.

This, again, is something Momoka can plausibly do, where it was a bridge way too far last week with Tusk. And hey, we even get a bath scene with a practical purpose that serves the characters, a rare thing. I say practical, because the nudity and proximity reveals Momoka’s scar from a cut she got when she broke one of Angelise’s dolls long ago.

Rather than get angry about the doll, Angelise tears her dress to stop Momoka’s bleeding. Mana could easily repair a scar most may find ugly, but Momoka kept it. To her, it’s a symbol of Angelise’s kindness and compassion, as well of a mark that represents her service and devotion to the princess until death. Momoka thus shows us a side of Ange we weren’t sure existed until now; or at least a side we couldn’t quite see past her appalling racism in the first episode. Momoka believes her Angelise-sama isn’t dead, but lies just beneath the hard crust of life since her exile. 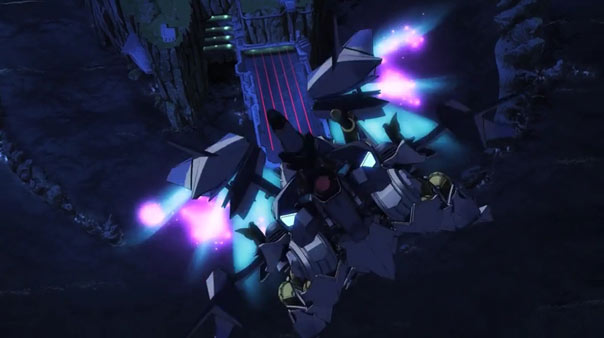 And Momoka would be right. If one would apply that flashback to the present: Ange’s resentment, guilt, and desire to discard her past life, all of it, is the doll: it simply doesn’t matter compared to Momoka. We knew as soon as Emma got off the horn with “the Committee” that Momoka was a security threat that would not be allowed to leave the island alive. We also knew the episode would use our previous knowledge that it isn’t afraid to kill off characters to give the situation some weight. Jill and Emma even create the artifice of a “transport” coming to “take her home”, perhaps to soften the blow. 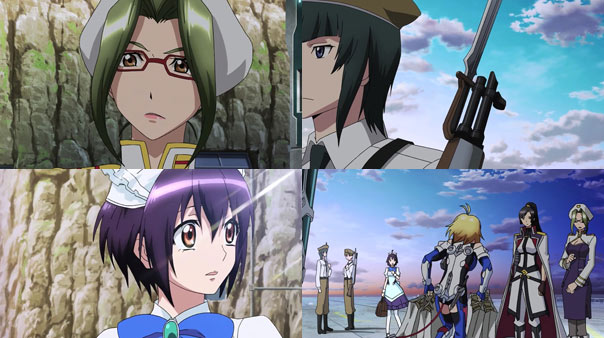 When Coco and Miranda were killed, it was because Ange was so green and freaked out of her gourd, there wasn’t much she could have done to save them, even if she hadn’t run. In this case, however, Ange has the means and the savvy over Arzenal’s system to save Momoka, so she makes it happen. She goes into battle, kills ALL the DRAGON, and uses her earnings to Buy Momoka, a transaction Jill permits, partially because even she probably feels bad about having to kill the innocent maid (Emma certainly does), and partially because Ange, the budding ace, finally understands how things work at Arzenal.