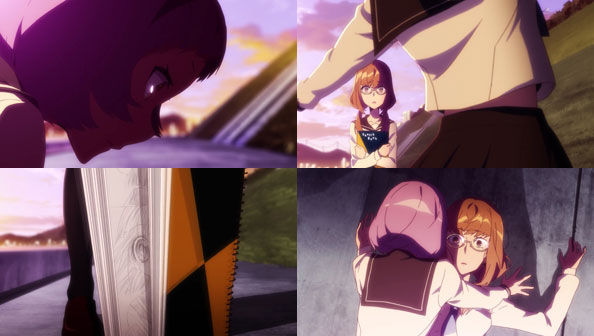 In the OP, which I consider the most excellent of the season, the Chidori is the final of the seven Kiznaivers to run across the screen before the title splash, giving her a certain prominence. But in both of the OP’s character “roll calls”, the one in the middle is Honoka Maki, and in the second one, there’s a dramatic visual stab (and the presentation of the Trigger logo) when she appears.

This, and some of the mysteries surrounding Maki and the someone she says she “killed”, has had me thinking the whole time that the most significant character story to date would eventually come from her, not Chidori. Another piece of the puzzle falls into place in a powerful flashback where Maki’s friend (and apparent manga partner) Ruri nearly leaps to her death before being pulled back by Maki.

Ruri laughs uncontrollably, doubtless because of the profundity of what had just transpired—Maki may call her stupid, but still saved her when it mattered. But Maki is just stunned. Why did Ruri do that? What if she tries it again when she’s not there?

Maki is toeing a similar line in the present: she may act all aloof, but she still comes to Kiznaiver get-togethers when invited, even if she leaves early without partaking in somen. Nico tries to follow and be friendly with her, but when she calls herself stupid, Maki can’t help but be reminded of Ruri saying the same thing, gets upset, and runs off. But now that she and the other six Kiznaivers’ hearts are connected, everyone feels her pain, and they can’t just forget it.

While she’s still a far more sterile personality, Noriko also seems a bit lonely as the mayor warns her of increasing difficulties in keeping the experiment under wraps. Her time is running out—perhaps in more ways than one, judging from her in-car self-injection—but she’s committed to delivering results. And hey, it’s not as if she hasn’t made real progress with the Kiznaivers. 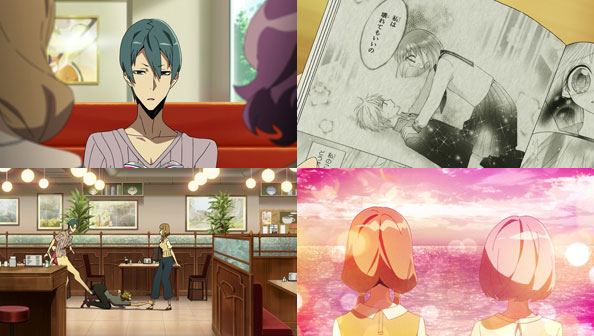 Yuta, still trying to maintain his normal life with his ladies, happens to be shown the same manga Maki created, made immensely popular when readers learned she and Ruri were middle schoolers. I like how Yuta is freaked out by the huge eyes, unimpressed by the hodgepodge of themes, but at the same time feels this is a window into Maki that, along with their new connected hearts, can help him get somewhere with her, in terms of helping to lift some of that pain and gloominess.

Maki, for her part, stubbornly rejects any kind of help, even when Yuta offers it unsolicited when her former editor asks her to sign off on a documentary of “Charles Macking”, her nom de plume.

The editors ignore her refusal to permit such a project and arrive at school to film her. When the cameras are stuffed in her face and everyone hears she’s Charles de Macking-sensei, she starts to lose it right quick. Fortunately, the other six Kiznaivers are given a mission she’s not aware of to “save her”, and they do—at least temporarily, from the camera crew.

It’s great teamwork, but it does nothing to solve the underlying pain Maki feels. Indeed, she seems to be repulsed by any attempt to help her, perhaps because she feels responsible for Ruri’s death, and thus feels she’s no longer worthy of friends, happiness, or pity.

Maki’s covered it up with her antisocial personality up to this point, but now her comrades know her game, and they aren’t about to accept her continued self-punishment. But rather than pester her more—she still needs to recover form the shock of that camera confrontation—they decide to try to learn more about Ruri, the person whose death caused Maki to fall into this state whom we know precious litle about, besides the fact she was a little bit of a daredevil.

As for Kacchon, he branches off from the others momentarily to express his disappointment with Nori-chan, most likely for giving them a mission involving Maki without Maki’s knowledge; a mission that saved her in the immediate but if anything made her emotional state worse. Noriko, for her part, is as surprised by Kacchon’s words as he is for saying them. She’s being pressed from both sides. I wonder what will happen, and if and how she’ll change, as conditions grow more desperate.

Oreki details his dismissal of the amateur detectives’ theories with Irisu over tea, and she tells him she knew they’d fail, which is why she sought him – not the classics club – out. She coaxes him to stay on the case, and he comes in to school to do just that, shocking Fukube and Mayaka. Re-watching the video with Mayaka’s suggestions and Fukube’s notes at hand, he figures it out: the culprit is none of the six actors, but a seventh actor – the one behind the camera. With this in mind, the film is completed and shown to a satisfied audience at the festival. But there is one thing Oreki forgot about: the rope Hongou requested.

A student who is always ignored by his/her classmates follows them to a seedy theatre. They know he’s there, but aside from a momentary glance they pretend he isn’t. Suddenly, the kid pops, and when everyone else is out of sight, he kills one of them and makes it look like a locked room mystery. It’s a home run of conclusion that seems to fit all the facts, and even more impressive is how quickly Oreki comes up with it, drawing from everything he’s seen and everything he’s heard. The rope question is a hole, but as the original intent was to make a successful film, it didn’t matter. Or does it?

This episode was a turning point for Oreki. Chitanda wasn’t here this week to flash those majo shojo doe eyes at him (she was hungover). It’s Irisu who exhibits confidence in him he never had himself; who tells him to take pride in his talent; who calls him extraordinary numerous times for dramatic effect. Oreki’s never done anything he didn’t have to, but now he finds that solving mysteries is not only something he has to do, but something he wants to. He may have given the film a culprit, an ending, and even a title (Out of Sight, Out of Mind; heh heh), but the thing he wants and needs most of all is to find out the truth.