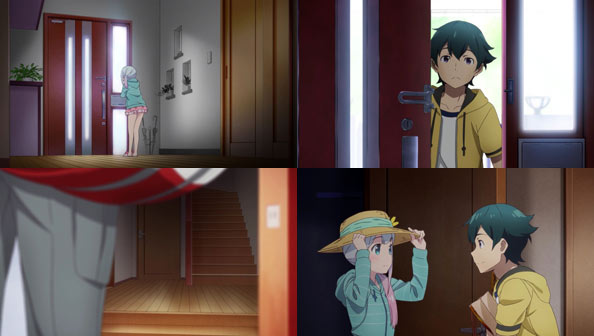 No Emily and no Muramasa this week: it’s just Masamune and Sagiri, with the latter trying so hard to welcome the former home in the foyer (and in a swimsuit), only to retreat to her room at the last minute. When the launch date of the novel they collaborated on arrives, Masamune takes a trip to the bookstore in Akiba with Sagiri in tow—in the form of a streaming tablet; a “sibling date” as Masamune puts it. 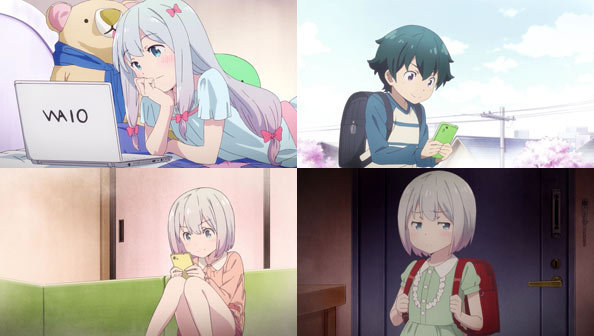 That journey becomes the vehicle for some pretty hefty reminiscing for both Masamune and Sagiri. After his mom died, Masamune decided writing stories online was the thing that made him happy, which made his family happy.

The reason writing made him happy? There was someone who found his stories interesting and would chat and text with him about it all the time. That person was Sagiri, but he didn’t—and still doesn’t—know that. Meanwhile, Sagiri, who had no dad, found drawing fun because someone liked her illustrations—Masamune, natch.

He even helped motivate her to go back to school and ask her mom to teach her more about illustrating, as both basically agreed to cut off their ephemeral relationship to realize their mutual dreams to become professionals in their respective arts. And they did!

That’s all well and good, and it is nice to see Masamune and Sagiri getting on so well while not technically related by marriage, though that’s what happens later on. These are two people who have always, at the end of the day, relied on one another to fill the hole of praise and support left by the absent parent in their lives, as well as serve as catalysts for their growth as writer and artist.

What I’m a little dubious about is that Masamune started writing these stories when he was only eleven damn years old, and Sagiri started reading them and drawing when she was only seven. That’s…really frikkin’ young to be having such a nuanced online relationship of mutual creative support with someone.

Then again, these two aren’t your normal youths. Also, a big chunk of the cast of Oreimo pops up at the end, with Kirino and Ruri debating the potential of Masamune’s new novel. Even Kyousuke and Masamune’s eyes meet. But just hearing such enthusiastic discussion about his work makes Masamune happy, which was the whole point of this all along. And when he comes home from Akiba, Sagiri does manage to greet him in the foyer. 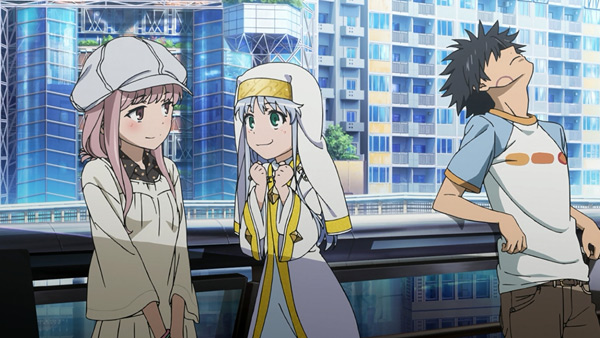 On the streets of Academy City, Touma and Index meet Meigo Arisa, a street singer/songwriter with mysterious miracle-like powers. She wins an audition to become the “spokes-idol” for Endymion, a space elevator nearing completion. Touma protects Arisa as she’s pursued by both the church – who believe her to be a saint, and Ladylee Tangleroad, the CEO of the company that built the elevator who has been cursed with eternal life. She sends her employee, the militaristic music-deaf Shutaura Sequenzia to retirev Arisa seeking to use Arisa and the elevator to create a magical device that will end her life – destroying half the world in the process.

When Shutaura learns of Ladylee’s true plans she turns against her. With the help of his many friends, acquaintances, and one-time enemies, Touma and Index launch into orbit to reach the top of the elevator, where Arisa performs before a massive crowd. As the parties on the ground disable Endymion, Index disrupts Ladylee’s spell, while Touma convinces Shutaura not to kill Arisa, punching her in the process. It turns out Arisa was the manifestation of Shutaura’s own wish when she was aboard the doomed space plane piloted by her father. Arisa merges with Shutaura, who regains as Ladylee’s spell is destroyed, ending the crisis. Life returns to normal.

First things first: woe betide ye who attempt to watch this film as a newbie to the Index/Railgun franchise. Aside from having no idea why a normal guy like Touma keeps shrugging off multiple blows and severe burns to his body, and has a tiny bitey nun for a roommate, all of the dozens of cameos in the film will go right over their heads. We ourselves have a certain soft spot for the franchise, and so were eager to see what they could do with a feature-length film. The results were very ambitious, and we came away from the viewing feeling it succeeded insofar as it adapted the spirit of the show – magic vs. science – and was a most entertaining romp, complete with robot fights, mecha/car chases, and space battles, all taking place in gorgeous settings.

We also dug the idea of dual heroines in Arisa and Shutaura. Looking back there were plenty of clues that they were pretty much the same person split in two: music was Arisa’s life, but Shutaura’s ears couldn’t even discern it; Arisa remembers nothing prior to three years ago; they both possess halves of the same blue bracelet. Arisa’s meteoric rise to fame reminded us of Ranka Lee’s similar arc in Macross Frontier, a series we kept thinking of due to the similar space opera-y milieu the film adopts in the second half. The film looked and sounded great, we had a lot of fun watching it. Had it run in a theater near us, we would have definitely felt we got our money’s worth.