As anyone who’s read my nearly five-year-late reviews of Steins;Gate, you’ll know it’s my favorite show, and I really enjoyed the ending, but that doesn’t mean I didn’t want to see more. A fun and serious peril-free epilogue was indicated, and sure enough, its what we got with this extra episode, which takes place two months after Okabe changes the power structure of the world and runs into a grateful and very knowing Kurisu in Akiba.

It also takes place in America; L.A. specifically, though on this the episode falters a bit with Okabe getting into some somewhat forced trouble with the TSA and later with some random cops. Granted, he’s acting pretty weird for someone not in his home country. And I must convey serious props to Kurisu’s choice of American wheels: a ’59 Cadillac Eldorado Biarritz. Like those stitches she applied to Okabe’s coat, it’s pink and memorable. 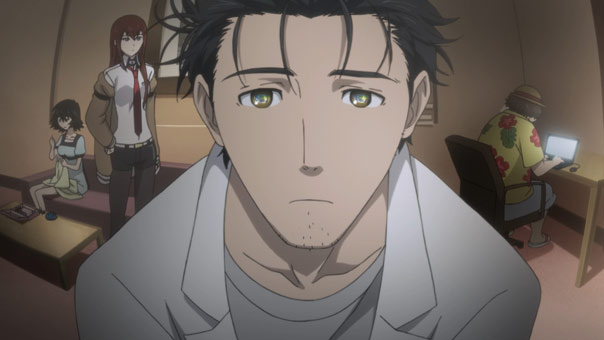 She drives her fellow Lab Members to her personal hotel suite and they proceed to treat it pretty much exactly like the lab in Akiba, even taking the same positions and engaging in the same activities. Routine daily habits are hard to break, even abroad!

Kurisu deposits them at the best lodging they can afford, and the members let their imaginations run wild. Combined with the fact they can’t quite figure who will sleep in which room, Kurisu decides she’ll stay there with them. 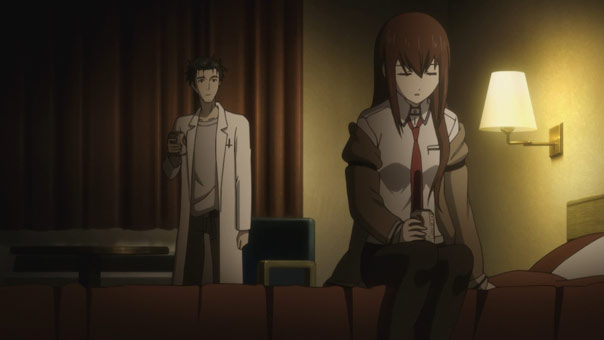 There, at night when everyone else is asleep we get a better idea of what exactly happened with Kurisu (over a DIET Dr. Pepper. AMERICA). She has dreams about things that happened, which happen to be some of her more memorable moments with Okabe, like cheering him up, or stitching that coat. They’re only dreams to her, but Okabe tells her they’re real, which makes it harder for her to bring up the fact she’s also dreamed of them confessing to one another and kissing.

Prior to that scene in the (surprisingly not too shabby) motel room, Kurisu had been her usual tsundere self, having even told Mayushii Okabe didn’t have to come to America, as if testing to see whether he’d listen to such nonsense. At the Rai-Net tournament Feyris invited them too (at Staples Center; nice) we finally see Kurisu wearing something other than her hot pants-and-cardigan combo; the same maid outfit as Feyris and Mayushii. It’s blatant fanservice, and somewhat random, but who cares? The whole episode is a thank you to the fans for watching.

And it only gets better. Kurisu lets on that she intends to forget all of the weird memory-dreams she’s been having, since they’re not pertinent to the current world line. Okabe tells her it’s fine, but he’s clearly miffed. Then he spots Suzuha getting into a Mustang and has a cab followe her. Turns out it’s Suzuha’s mom, who in another world line met Daru at the Rai-Net tournament, fell in love, and had a daughter in seven years. Another neat little thread. 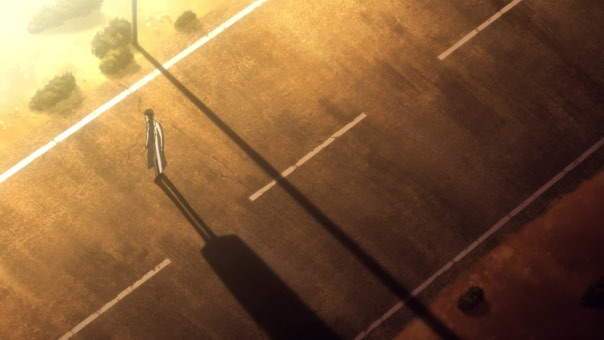 But his desperate chase cost him all but 67 cents of his cash, and his phone battery is dead, so Okabe must return to civilization on foot. He does seem like a dude who can’t be left alone lest he get himself into trouble, doesn’t he? Especially abroad.

Lucky for him, he’s rarely alone, and Kurisu arrives on her proud, pink steel steed to rescue him, just as he once rescued her in another time.

S;G has always been pretty stingy with color, other than its cobalt sky. But for this final, wonderful scene, the sun sets and fills the frame with gorgeous hues; the perfect backdrop for some straight talk between the lovebirds. When pressed, Okabe admits, he told her he loved her in another world line, and she him. More than that, he still loves her, and always will, no matter which world line he’s in. Just to be clear, he repeats himself, and asks her how she feels.

And in what’s pretty much a perfect end to an imperfect but still immensely fun epilogue, Kurisu proceeds to respond the exact same way she did the first time Okabe confessed: by telling him to close his eyes. They’re in the desert at sundown with a car with no gas, but I suspect these two crazy kids are going to be just fine.

Next Week, I review Steins;Gate the Movie: Burdened Domain of Déjà vu.