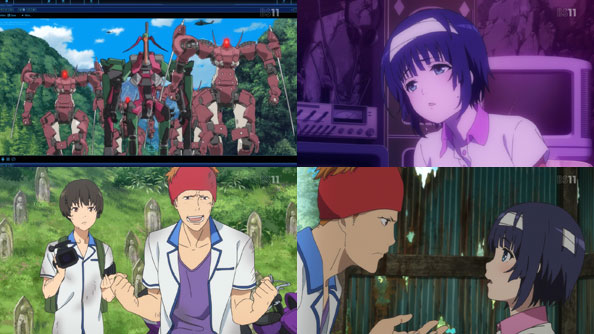 Not long after coming to in a cave filled with clocks and obsolete electronics, Yukina passes back out, as if hypnotized by the mysterious figure with the robotic voice and her dad’s watch and journal. She wakes up in a bus shelter, where Akagi and Kaya find her.

Just like that, all the potential answered questions about Yukina’s dad, and all the other mysteries in that cave, dissipate. That was a little disappointing, and the whole cave thing felt like a tease, but I came to forgive the episode when Yukina came around on piloting the artifact with Ken.

What I like is that there wasn’t any one reason she didn’t want to and tried to run away: she’s scared; overwhelmed by the pressure; uncertain if this was the right path. But she also doesn’t like how she’s been ordered around like some automaton. Would it hurt for someone to ask her nicely?

Having dealt with her absence, Ken is resolved to let Yukina go, but Yukina isn’t ready for Ken to disappear from her life. She’s taken a shine to the guy, and vice versa, and when he realizes it’s as simple as asking nicely, he does so, and before lone Yukina is back in the cockpit with him.

I also appreciated that Hiromi’s decision not to let the military force her daughter into the artifact, even using her body as a shield. The protection is unneccesary, as Yukina was only “annoyed with herself” and needed some time and space, which she got, and is now willing to do her part.

Once Yukina and Ken are in their tough new skin-tight nanofiber flight suits, Yukina puts on a brave front but Ken sees her hands shaking. She admits it: she’s scared shitless, but that command artifact out there isn’t going to defeat itself, and she doesn’t want Ken to use her absence as an excuse to get himself killed, nor does she like the idea of him sacrificing his life to save her. She’d prefer if they get through this together.

What “that” is could have been very intriguing indeed, had Efidolg succeeded in abducting Glongur and bringing Yukina and Ken up to the mothership. But that possibility is negated when the UN’s hunch about the tractor beam neutralizing the artifacts’ shields proves true.

Another possibility not realized: Akagi and Kaya are once again very close to an errant missle explosion, but neither is even slightly injured. Not sure why they keep teasing the fact that these two could end up stains on the mountainside, adding to Yukina’s burden by association, but Akagi is determined to play a larger role in her protection, and not just because he teased her when they were little.

Sophie and the guy with the dirty mouth show up to take out the small fry, leaving Ken free to take on the boss artifact. He has trouble with his acrobatics, but Yukina again uses her unusually extensive knowledge of geology to lure the artifact onto a rock face she knows will crumble.

Rather than self-destruct, the Efidolg pilot surrenders. This was initially surprising, but I’m pretty sure when both Plan A (capturing Glongur) and Plan B (defeating Glongur in a duel) failed, he pivots to Plan C: letting yourself be captured by the enemy so you can learn more about them and possibly escape and cause more damage from within. We’ll see how he plays it.

Like Ikari Shinji, who was overwhelmed by duties and expectations, Yukina seeks refuge away from the places that have oppressed her, but neither strays too far. Yukina hides out in Ogino’s room (decorated with posters of other P.A. Works), unsure of what she wants to do but very sure of what she doesn’t, namely fight and kill people in Glongur.

Ogino is a good friend in that she lets her crash there, lies to her mom for her, and gives her space to sulk. But she’s also a good friend because she provides her own perspective on Yukina’s plight—i.e. it’s a blessing, not a curse—and tells her the sulking and running has to end eventually, and she has to go home.

Akagi and Kaya turn out to be fine, and were only gone as long as they were because Akagi’s bike ran out of gas. He gets a punch and a stern reaming from his father, warning his son not to “keep living for others’ approval,” but Akagi is mostly concerned with gaining Yukina’s approval, and he feels bad for ending up in a position where she might have been hurt.

Ken claims not to be worried about Yukina, and is only searching for the key to his artifact, but let’s be real here: of course he’s worried; after all, he’s still not certain Yukina isn’t the reincarnation of his princess. The princess is gone and his sense of purpose with it…except that Yukina has been filling the role of protectee he needs so dearly.

Talk about what Yukina wants comes up both in class and at UN control. Sophie suspects that if Yukina being in that artifact’s cockpit is the only thing keeping Earth safe, Yukina’s getting in that cockpit, whether she wants to or not. Unlike Shinji’s dad Gendo, Hitomi isn’t ready to commit to forcing Yukina; she’s more concerned with simply finding her. 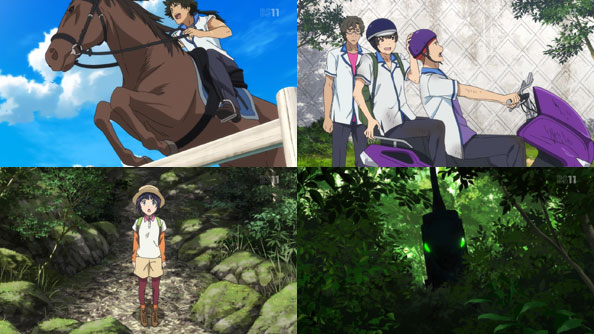 Yukina’s would-be protectors mount a search for her; Ken on the big horse he met earlier, Akagi on his refueled bike (with Kaya tagging alone, hungry for more viral streaming).

Rather than go to school (which would feel like a quick surrender), Yukina heads into the Kurowashi Valley, where the castle of Ken’s lord once stood but has since been reclaimed by nature.

Not having any satisfying answers about how to proceed, perhaps she thinks following her father’s journal and exploring the site where the demons once attacked might shed some light on her proper path. Or heck, maybe she’ll find her missing dad.

Little does she know, the area is swarming with formerly dormant Efidolg Cactii, one of which zeros in on her location and attacks her. She’s saved neither by Ken (who gets close but never finds her by episode’s end) or Akagi (who took off later).

Instead, the magenta cactus is destroyed by a mysterious blue robot and a man with a very sharp sword and a watch Yukina instantly recognizes as—you guessed it—her father’s. The way this reunion has unfolded, it’s almost as if Yukina was always meant to ‘run away’ (even just a little bit) in search of either a reason for—or alternative to—pilot Glongur.

I’ll close by presenting two little snippets from the episode of both Ken and Yukina talking to themselves: 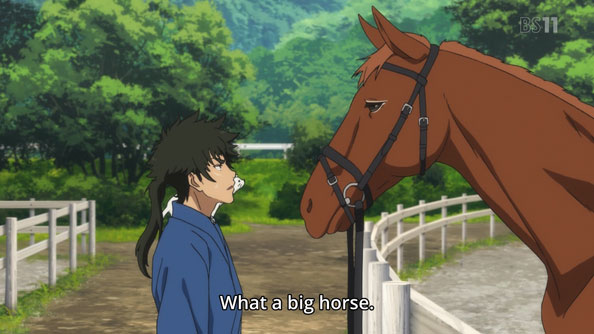 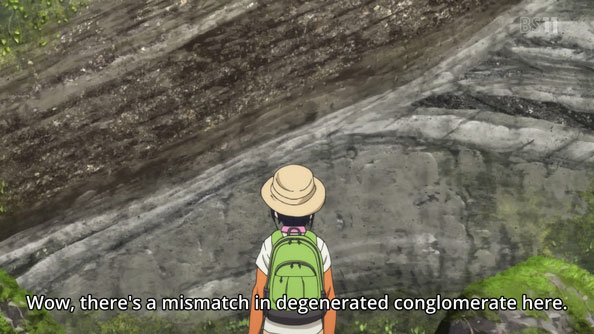 I just wanted to point these moments out because I laughed heartily at both, for different reasons. Ken’s surprise at the horse’s size is another unique product of a samurai from four centuries ago suddenly finding himself in the present, where horses (and Japanese people) are simply larger due to better food, medicine, and breeding. His delivery is great too.

Yukina’s observation, on the other hand, is one of the most sophisticated collections of words she’s spoken. It seems meant to show us there’s more to this unmotivated airhead than meets the eye. She’s either a secret geology buff or maybe she was just paying special attention to one particular part of class.