Ao is utterly apathetic about the upcoming sports festival, until she learns Takumi will be on the cheer squad, and dedicates herself to training hard for the 800m run so she can experience the joy of being cheered on by the guy she likes.

Kudos for the show finally portraying these two as a comfortable, easygoing couple, even if they’re not 100% officially “dating;” it’s nice to see Ao not only publicly acknowledging her interest in Takumi (already well known in her class) but contributing to him making the decision to participate.

Of course, there has to be a conflict of some kind (beyond winning the race) and it comes in the form of her father, who has embarrassed her at every level of her education during the sports festival. When she bans him from this one, he bans her from ever moving out, and the two.

Yet, despite their fight, and despite the fact Ao made sure Yabe increased his workload tenfold, her father still makes it to the festival. Ao notices him just after having a talk with Takumi, who tells her he’s probably not that upset over their fight and that she should just talk to him.

While Pops gets to apologize, and explains his presence as having done all the work put before him with maximum efficiency, all so he could watch her compete, Ao is about to apologize back, but it’s time to run. Her dad joins Takumi and the cheer squad, and Ao takes the lead, but starts flagging in the home stretch.

This is when Pops fulfills Ao’s worst fear, yelling for her to hold onto her “G-cups” so she can run faster. This embarrasses her, Takumi, the cheer squad, and also freezes the other runners, as well as energizes Ao into finding her second wind and finishing first. But her Pops doesn’t escape a beatdown for his raunchy words.

Of course all of this could have been avoided if the show remembered there are these things called sports bras, to be used while running, jumping, and doing other athletic things! 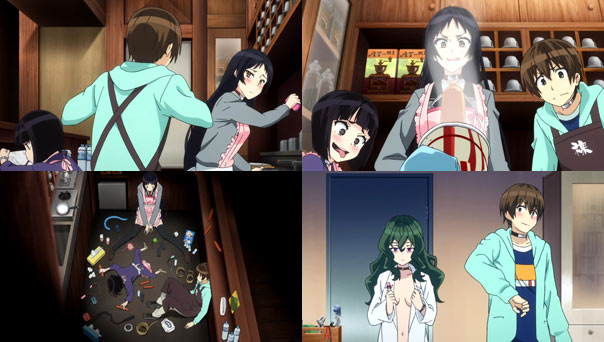 It’s tiring work, most of all for Tanukichi, who has to endure a constant stream of dirty talk from Ayame and Otome, but is called “sick” and a “pervert” when he suggest they focus equally on male and female “products for health and beauty.” It’s a hypcrisy that persists in Ayame, who at the end of the day is more naive than Okuma, who had a father in the trade.

Tanukichi also falls victim to a misunderstanding when he pays a visit to Hyouka to pick up the wireless, remote control mini-vibrators she built for them. Not only is Hyouka naked under her robe (after accidentally falling into a water tank), but she wants Tanukichi to repay him by showing her how his “cucumber prepares for battle.”

They’re very close when Anna barges in, and Tanukichi has to come up with a lie to satisfy her in a hurry. He manages to succeed by offering one of the two vibrators to Anna, calling it a “Power Stone.”

Anna makes a blingy pendant of it, but when the remote malfuncitons, it’s stuck on, vibrating her bust, resulting in what can only be described as a hilariously ridiculous spectacle. It also turns Anna on, to the extent she dismisses Goriki, locks herself in the StuCo office with Tanukichi, and proceeds to hold him down. 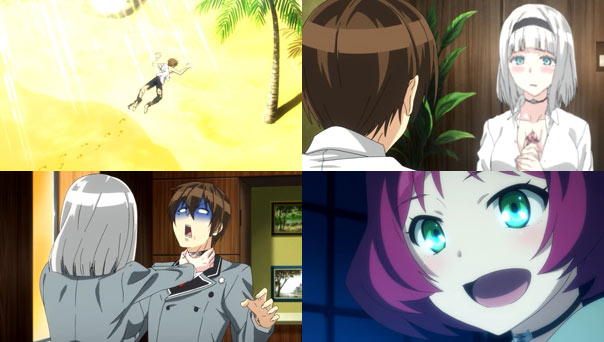 The longer-term crisis for Tanukichi, of course, is that Anna immediately demands a new “Power Stone” to replace the one that broke. Worse, whenever he so much as looks or speaks to another girl, Anna grows violently jealous. SOX has truly created a monster.

With the daughter of a high-ranking Morality official getting excited about SOX’s terrorist activities, it looks like he’ll soon have one more girl filling his ears with dirty talk and threatening to incur more of Anna’s wrath.

What had been Tanukichi’s Boring World Where the Concept of Dirty Jokes Doesn’t Exist has now become an annoying, stressful, often life-threatening world where dirty jokes—and acts—are rampant and unpredictable. But definitely not boring.

This week Sket Dance presented two instances of mucking up, then digging the hole ever deeper. First, Bossun needs a haircut for a photo in the school paper. Rather than go to a professional barber, he avails himself of the dubious tonsorial services of Himeko and Switch.

The results are predictable: they take turns ruining his hair, only to grow it back with a potion devised by their advisor. It works too well, growing hair “like a locomotive”, and after replenishing Bossun’s hair too many times, it fuses into a massive afro. While the premise is somewhat tired, the execution makes this sequence, with lots of good sight gags.

The second part featured the antics of the student council as they attempt to remove marker from a bronze bust of the principal and end up trashing it. It reminded me of a scene in the film “Bean” in which Mr. Bean meticulously and systematically ruins the painting Whistler’s Mother trying to clean his sneeze off. Like the magic hair tonic though, the ultimate fix is Minorin’s vast monetary resources. Two in-too-deep storylets, two unconventional resolutions.

Inside, beneath her hard exterior, Min knows she doesn’t make the best ramen in the world. Her father never intented to pass either his business or his recipes down to her, since their relationship was apparently strained. But he disappeared, so she took over Hanamaru anyway.

While she knows she’s not the best, she’s fiercely proud and strives to be better, and doesn’t appreciate ramen snobs taking just one sip then paying. Of course, that snob turns out to be her father, essentially checking in to see how she’s progressing. After all, artists like constructive critique. They don’t like people just walking out without explaining themselves.

The NEET Detectives’ case was very close to home this week, and without any Yakuza or clients-of-the-week, the core cast could shine. An apparent stalker is revealed – quite incredibly – as a bigwig designer at a lingerie company who simply cannot allow Min to walk around confine her “Taj Mahal” bust in something as vulgar and a sarashi. It’s silly, and allows for some fanservice, but the guy says he’s an artist – like Min, only with underwear, not ramen.

Artists can get hung up on things very easily, and are driven by some invisible force to achieve their goals, no matter how ludicrous. This episode really fleshed out Min a little more, giving her some background and depth; she previously hadn’t been much more than Narumi’s stern, cantankerous boss. Here’s hoping we can look forward to more character stories peppered in between cases – or mixed in with them.