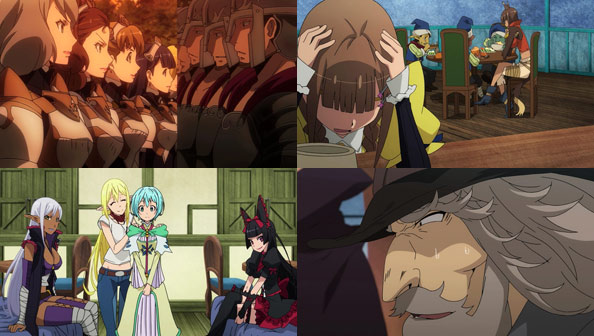 This week everything inches incrementally toward some kind of final confrontation in the capital, where it’s quickly becoming clear to everyone interested in peace that Zolzal can’t be allowed to rule much longer. The Rose Knights continue to fight for his bedridden father, against men who don’t at all want to slaughter the women they respect, who were allies until today. But it’s either the Roses or their families. 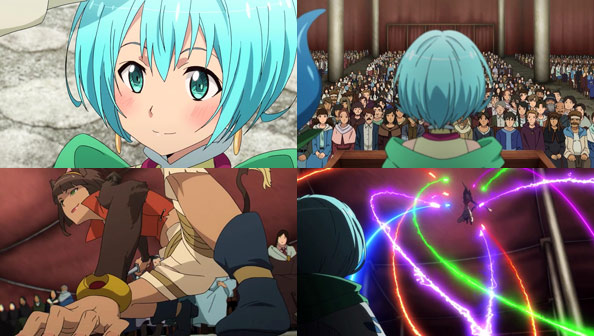 As for Lelei, the assassination attempts continue as she attempts to make a presentation for her promotion to master; a cat-woman under the apparent influence of the Pied Piper. This time, the attack is foiled by Lelei’s fellow mages, watching her back and prompting Itami to wish the JSDF had magic. 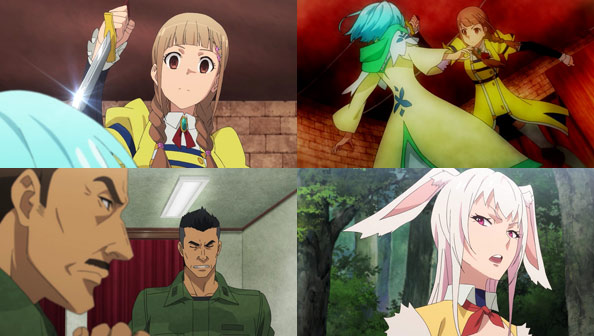 Of course, it’s good old-fashioned dagger in the chest by someone unexpected that seems to get Lelei, as the opportunity for Shandy to strike presents itself, and she takes it.

Meanwhile, as the low-morale Imperial soldiers continue to be beaten back by the knights, Tyuule tells the Oprichnina leader to either gather more men and get the job done, or kiss his own position and life goodbye. All the while, the SDF awaits official orders to intervene in the Jade Palace siege. 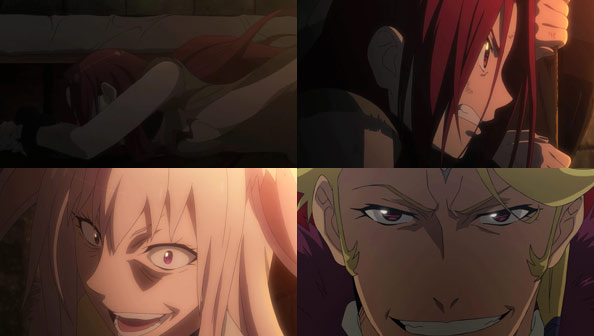 Speaking of inching along, Pina is a “free captive” for all of a day or so before Zolzal’s henchmen clap her in irons and a burlap shift and toss her roughly in a cell, dispensing with her status as a member of the royal family.

Tyuule takes great pleasure in seeing Pina wearing the same shift she wore, occupying the same cell she once spent an inordinate amount of time…perhaps enough time to drive her to her crazy, power and revenge-hungry state.

The thing is, she hasn’t referred to Zolzal as her ultimate enemy in some time; all she seems to be doing is doing his bidding, perhaps all in the name of bringing down the empire. Right now her priority seems to be remaining in power and taking sadistic pleasure in throwing her new-found weight around. 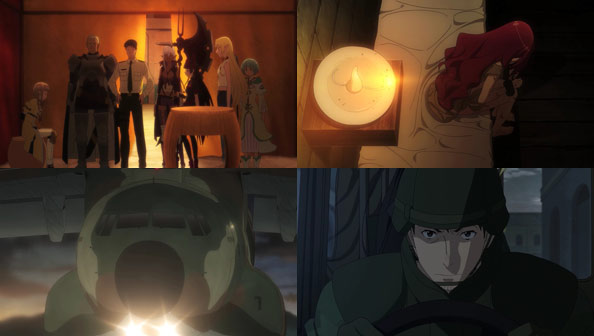 Shandy, it turns out, was not under the Piper’s spell, but heard that Pina was in mortal danger and believed the only way to save her would be to bring Zolzal Lelei’s head. This is an incredibly naive and shortsighted strategy, so I’m glad she was foiled. But at least she’s able to relay the fact Pina is in a very, very bad way, and needs rescue before something terrible happens to her.

Fortunately, the SDF gets their orders, and a paratrooper unit is quickly mobilized for an operation to save the Japanese citizens and pro-peace asylum seekers. At the same time, Itami and his gang races to the Imperial Palace to free Pina.

Everyone still in play is moving into position, and hopefully their efforts will bear fruit in terms of stopping Zolzal/Tyuule’s reign of terror, which is benefiting no one.