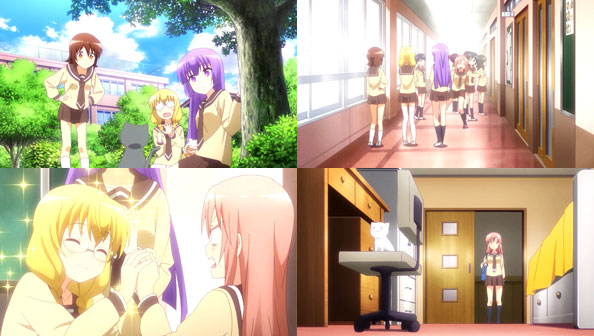 Nicknames, olive branches, and sisters who are opposites – San-San’s second episode covers a lot, but at a gentle yet lively pace. We meet Serina, Hayama’s self-appointed rival, whom Hayama always makes a fool of with the sweetest demeanor possible.

Their verbal sparring is quite good, but so is the truce they reach when Hayama, who beneath the blackness within has a kind heart, offers a kitten to replace Serina’s last cat who died. 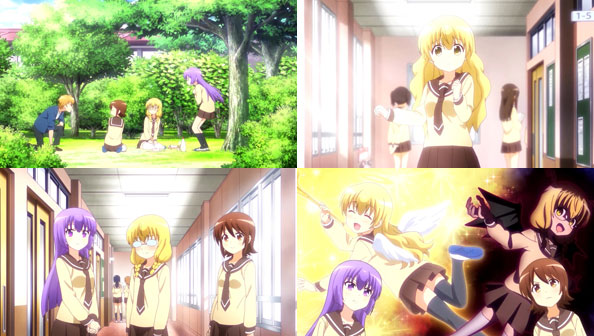 After Yamagi insists Hayama and Futaba refer to his master as “Yoko-sama”, the nickname sticks, and it’s time for Hayama. When Futaba and Yoko learn her first name is Teru, I like how Futaba has a little fun with it before agreeing with Yoko it’s actually a nice name (and it is!).

The one who yells “Teru” in the hall is Teru’s own big sister Kou, who is part-angel, part-airhead, who likes putting strange combinations of health food ingredients into candy. 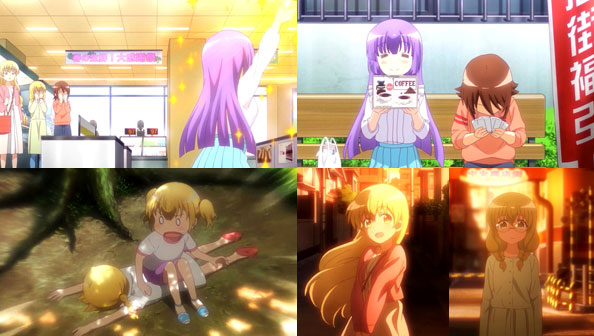 The girls end up running into each other in the shopping district, where Yoko shows how serious she is about squeezing every penny (to their embarrassment) and Teru figures out that her (healthy, lucky) sister got on the health food kick in order to ensure her little sister—always sickly and unlucky as a small child—gets proper nourishment.

That doesn’t make her strange onigiri any easier to choke down, but Teru and Yoko choke it down nonetheless. For Yoko, wasting food is an insult and a sin; for Teru, she wants her sister to know she appreciates her care. San-San, like Shounen Maid, is pleasant low-stakes slice-of-life, but edges it out in cast chemistry and comedic pacing. 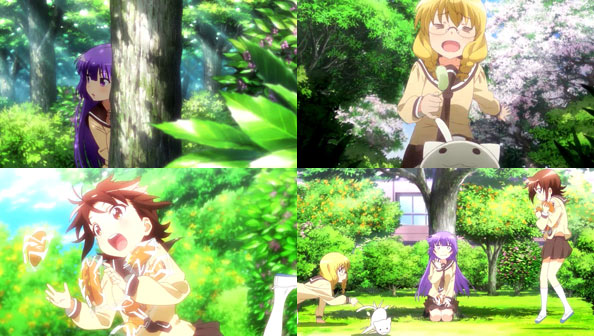 Sometimes it’s nice to just sit back, relax, and watch a show about three colorful characters, voiced by three young, hungry seiyuu, coming together and shooting the breeze about nothing in particular…but mostly food!

That’s what we have in Sansha Sanyou, a minimal-stakes slice-of-life comedy with cute design and crisp, clean visuals that I’m seriously considering as my feel-good pick of the Spring 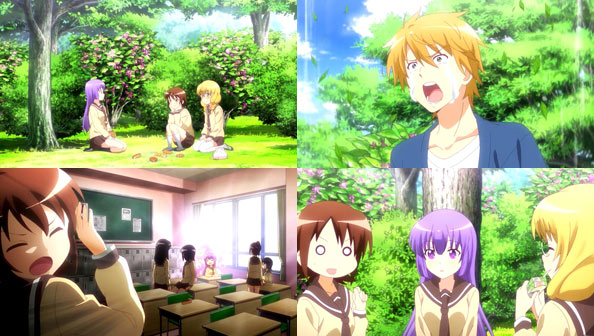 As I said, Hayama (blonde class prez with a well-concealed mean streak), Futaba (energetic girl who loves to eat) and Yoko (purple-haired former rich girl struggling with making friends) are all voiced by relatively new, inexperienced actresses (Futaba’s seiyu is a pure rookie).

You can hear their infectiously fresh exuberance in their line delivery, much like Sore ga Seiyu. They also happen to have decent chemistry, comic timing, and range. They’re young, but they’re talented. Their efforts are backed up by appealingly above-average, colorful character design and naturally-flowing dialog that takes some interesting and unexpected turns.

I like how Hayama and Futaba, already good friends, decided to become friends with Yoko just because various random circumstances brought them together, and…well, why not? At the same time, Yoko is working hard to fit into “commoner society” now that she’s no longer super-rich. 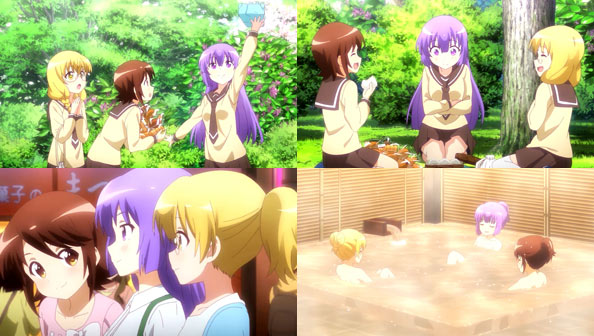 Yoko’s doting worry-wort semi-stalker of a former servant is a nice touch, as is her legitimate elation over receiving freebies, her worries over the cost of everything (hence her bread crusts being her main repast) and her earnest attempts at cooking for her friends, who enjoy the variable results without complaint, as good friends do.

Hayama also shows she’s got a hard edge behind her adorable demeanor, making a challenging classmate cry off-camera then shrugging it off. And while Futaba is the simplest of the three characters, she knows Hayama well and they bounce off each other’s eccentricities nicely.

There’s nothing overly complicated here, and that’s the point. The only question is whether I’ll have enough time to watch it, because it’s definitely good enough to keep.