I can only admire Fate/Zero for its willingness to include a little bit of everything for everyone in its Holy Grail War, and as it had already featured a dogfight between Archer and Berserker, it was only a matter of time before Saber got into a chase with Rider, she on her motorcycle and he and Waver on his giant chariot.

The resulting chase does not disappoint, as Saber squids fearlessly through traffic, pushing her steed to its mechanical limits before deciding Screw it, I’m bosozokuing this motherfucker. While I prefer the more classic look of her bike, it’s still hella cool she can soup it up the same was she can soup up her armor.

With only five episodes left (my how time flies) I wasn’t ruling out the possibility this would be it for Rider, but Saber is content to withdraw after destroying his chariot with Excalibur, after which Waver and Rider lament that they have to walk home; a not inconsiderable distance considering the speed and length of the chase.

And that’s pretty much the last of the levity in this episode, as things go visually and thematically super-dark from there. Turns out Rider didn’t kidnap Iri (didn’t seem very in-character); it was Kariya’s doing, using two command seals to A.) control Berserker and B.) disguise him as Rider. Kiritsugu tortures Kariya’s brother Byakuya but doesn’t get much out of him. 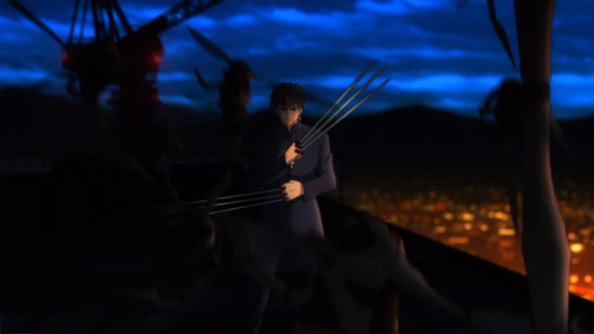 Kirei has been busy since killing Tokiomi; further exploring his capacity for “entertainment” by manipulating Kariya, using new Command Seals and his bloodlust for Tokiomi as bait. While this all makes sense, I wish we’d have been able to witness Kirei initially approach Kariya after healing him and his stint with Zouken. Instead, the plan came together entirely in the background and has to be swiftly explained after the fact.

Once Kariya is off to the church to duel with Tokiomi (by now very dead), Zouken reveals himself to Kirei. If there is one remaining bit of levity in this episode, it’s here, as Zouken, truly a top-class Master of Evil, seems to take a shine to Kirei. Kirei is understandably disgusted by the mere suggestion of being compared to scum like him.

But for once, Zouken is right: I have no doubt that after a few more decades of this kind of stuff, Kirei will be standing in the exact same place as Zouken, King of Shitbags – so shitty, he’s not sure what he wants more: to win the Grail War, or watch his son continue to suffer.

And does Kariya ever suffer. After entering the church and yelling at a corpse, he discovers Tokiomi is already dead, just when the deceased’s widow Aoi arrives, no doubt summoned by Kirei. It’s not what it looks like (that Kariya just killed Tokiomi) but it sure looks bad, and Aoi doesn’t go easy on Kariya, rejecting his excuses and condeming him for never having loved anyone, despite the fact he always secretly loved her.

Kariya is clearly not in a stable place mentally here, and that instability and the resulting breakdown is chillingly depicted with a series of blackout shots, tinged with flashes of him attacking Aoi (the dark church appearing bright beside the blackness), before returning to full vision of him slowly strangling her to death.

After that all Kariya can do is get up and stumble out, screaming and wailing incoherently; becoming more like his unhinged Servant all the time. And who enjoyed a prime vantage point for this macabre entire “play” up in the church balcony? Kirei, who along with Archer were watching and sipping wine the whole time. Kirei notes the wine tastes different; better. He wants to sample more.

Haru and Taku meet up with Yuniko in a maid cafe, where she grudingly agrees to give Taku a crash course in the Incarnate System. While she trains him in an arctic wasteland, Haru returns to the real world, and Yuniko’s underling Blood Leopard takes him to a neutral underground duelling hall in Akibahara where they’ll investigate Dusk Taker’s ability to stay off of the lists.

The Red King Scarlet Rain proves a valuable, if reluctant, ally to Haru and Taku in their quest to defeat who’s likely the final boss in this series, the insufferable Nomi Seiji/Dusk Taker. Not only does she welcome them into her Red Legion’s prominence base and give Taku a personal lesson in how to use the Incarnate system, as a bonus she lends Haru the services of one of her subjects to aid in his investigation of Nomi. It’s good to be strong, but they won’t beat Nomi unless they know as much about him as they can; no more surprises.

We liked Yuniko’s sudden shift from her cheerful facade to surly grouch when Haru mentions Incarnate in public; but we’re glad she knows she has a debt to pay and is willing to do so. We also like Blood Leopard’s very matter-of-fact manner with Haru (we too thought at the time she was pretty stiff for a maid waitress!) Plus, her bosozoku motorcycle with voice-activated ignition is freakin’ awesome, and riding it in a maid costume really helps them blend in with the colorful Akiba rabble. The underground duelling bar is another nice touch.