Like water towards a drain, Dx2’s many  characters are accelerating faster and faster towards the epicenter created by Nasujima, and Anri lists all the people who have a reason to go and fight, including herself. First things first: she wants to help Dotachin’s group rescue Erika from the Saikas.

She also feels it’s time to finally reveal her secret to them: that she has Saika within her; that she’s not quite human. Unsurprisingly, no one in the van recoils or condemns Anri; quite the opposite. These are Celty’s friends, after all (not counting Namie, though she’s with Seiji).

As Shizuo and Izaya’s battle continues, with Shizuo stalking a slow, wounded Izaya, their friend Shinra reminisces on a talk he had with Celty back before she got her head back and lost her memories. He draws contrast between their group of friends at school and the triangle of Anri, Mikado and Masaomi.

In particular, how the their friendships have been defined as much about the secrets they kept from one another than anything else. Izaya and Shizuo never had any secrets about who they were to the rest of the world, while Celty, like Anri now, wanted to be the peacekeeper. Shinra isn’t ready to give up on her yet, as the dark night sky reminds him of her embrace.

Anri, meanwhile, is overcome by gratitude that Dotachin and his crew are so kind and understanding, but Dota makes it clear: even though Celty’s far less human than Anri, they know her, and know her well, and care for her, so they’d never fear either her or Anri.

As for Erika, she digs into her purse and finds the one thing that will serve her best in the middle of a pack of Saika zombies: red contacts lenses. Able to move more freely by looking and acting the part, Erika’s wandering segues nicely into Niekawa, who Anri calls on her cell.

Nasujima answers for her, telling her how Niekawa now calls him mother, that Mikado and Masaomi have been invited to his “party”, and she should attend as well. This only further steels Anri’s resolve to do what she can both for Erika and for her two best friends. 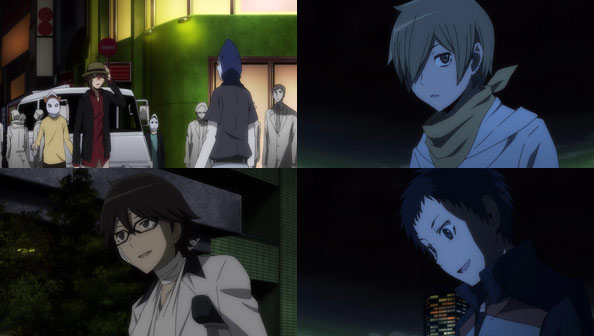 Masaomi and Chikage, it turns out, are tricked by Blue Square, by having Chikage lured into a baseball bat ambush while Mikado sneaks up on Masaomi on the rooftop to finally reveal his secret: he’s the founder of the Dollars. It’s a confession so long in the running I could have sworn Masaomi already knew long ago.

But the confession itself is of little consequence compared to whatever Mikado plans to do next. Is that gun for Masaomi? Are they truly beyond the point of no return? Can Anri get to them in time, and when she does, slap some sense into them? Will Shinra be able to reunite with Celty, and will she ever remember him again? Will somebody put Nasujima in his place? This is all going to be answered very soon.