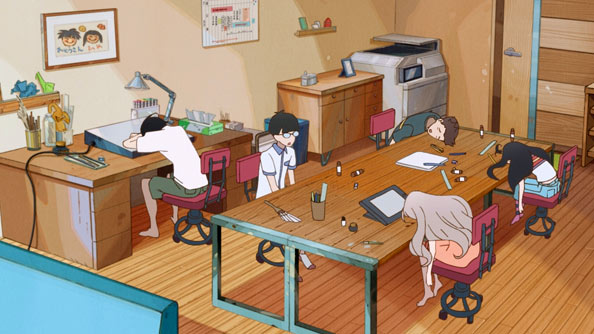 In addition to being about a single father and daughter, Kakushigoto offers a glimpse into the lives of manga artists. Kakushi’s team is up against a deadline, so they escape reality by getting absorbed in doing chores or cooking. They end up completing the manuscript in time, and while it might sound counter-intuitive, they were only able to do it because of the gyoza-making session session.

Since a manuscript is done, Kakushi and crew have some free time, so they head to a beach (and a villa owned by a manga artist who, like many, dreamed of working by the sea, only to soon regret it). Unfortunately for Kakushi’s assistants, the villa is in dire need of a deep clean.

Meanwhile, Kakushi spies on Hime, who is on a school field trip. He’s caught several times by Ichiko, who thinks he’s talking about her (and not Hime) when he says “the cuteness is undeniable.”

Kakushi also goes to great lengths to ensure Hime doesn’t endure teasing, first by buying a beetle for her to easily catch (though it’s the wrong species), then flying in an Indian master chef to add seasoning to her curry (though it’s too spicy for the kids).

He returns to find his assistants are too exhausted from cleaning to go out, so they aim to have double the fun tomorrow. Alas, a typhoon hits the area hard, and they’re stuck inside with the power out and nothing to do…but draw manga. One of them, Rasuna, draws in her swimsuit, because she brought a swimsuit so she has to wear it somewhere, dammit! 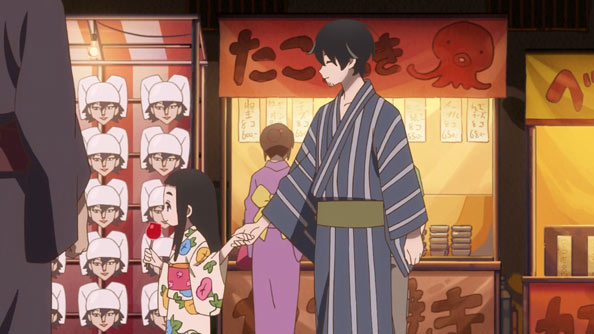 While taking Hime to a festival, Kakushi keeps spotting bootlegged merchandise bearing the face of a character from his manga. Mortified Hime will put two and two together, he buys up all of the masks, cotton candy, and attempts to shoot all of the targets, using his assistants to carry the huge loads of merch away.

In the process of doing all of this, poor Hime has to sit on a bench and wait instead of spending time with her dad. It’s a case of Kakushi worrying and thinking way too much. Hime isn’t actively trying to find out the truth of his livelihood.

In another segment that bends reality, a pair of police investigators come to Kakushi’s makeshift studio, on suspicion they’re running an antisocial cult. With every piece of “evidence” the detectives find, their crazy suspicions grow more ridiculous, until they fear Kakushi and his comrades are planning to overthrow the government.

Three of his four assistants surrender, hoping they’ll receive leniency, and Kakushi follows suit when he considers the possibility of not being there for Hime. Ultimately it’s Rasuna who proves to the cops that Kakushi is indeed a manga artist and harmless—as long as you consider a naked artist’s portrait in the back of his book!

Finally, while printing out photos of their festival trip, Kakushi wonders where Hime’s yukata came from. She tells him it’s hand-sewn, and she found it in the closet. Kakushi opens said closed, for the first time, and discovers boxes for every year of Hime’s life up to 16, no doubt packed with age-appropriate, hand-made clothes. Kakushi has been so busy with his manga and keeping his job a secret, he never knew his wife too great strides to ensure Hime would be well-dressed after she was gone.

Fast-forward to the present day when Hime is 18, lamenting how she never tried to find out what her dad really did and is only learning now. She finds new boxes for ages 17-20 in the storage house. It sure seems like Kakushi has died at this point, and that lends an extra layer of melancholy to all the segments in the past—especially when you consider how much time (and money) Kakushi spends keeping his job secret.

If he’s dead when she’s 18, that means the 10-year-old Hime only has seven years left with her dad. It’s kind of heartbreaking! 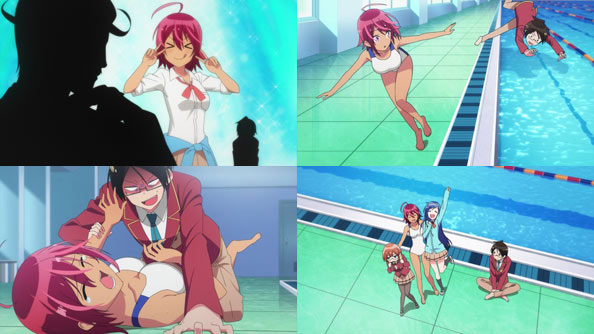 When Yuiga reports the girls’ slow but steady progress to the headmaster, he gets a surprise: the assignment of another troubled student. This time, it’s someone he knows, and who has mooched homework and notes from him since middle school: the “Shimmering Ebony Mermaid Princess”, Takemoto Uruka.

While Furuhashi is a poet and Ogata is a scientist, Takemoto is a straight-up jock; going so full-on with swimming that she doesn’t even have time for studying. But as Yuiga informs her by the pool, colleges want more well-rounded enrollees, which means she’s going to have to study.

Takemoto reacts by physically running away, and while giving chase Yuiga falls in the pool and can’t swim. Takemoto rescues him, but he then captures her, and the first time Furuhashi and Ogata see the two together, it looks awfully like he’s assaulting her! Thankfully the misunderstanding is cleared up and the three become fast friends (or at least, Furuhashi and Takemoto do).

There’s another wrinkle to this beyond Yuiga adding to his stable of talented beauties: Takemoto likes him. She’s had feelings ever since she fortuitously overheard him say how he wouldn’t just give his homework and notes to anyone, and admires how much she sacrificed to be the best swimmer she could, and wants to help her if he can. Again, Yuiga is a nice guy, even when he thinks nobody’s watching.

He’s such a nice guy, he allows Ogata to come by his house (while his family is out) with the blatant bribe of her family’s udon (of which they’re quite proud) in exchange for help on an essay her teacher has rejected numerous times. The tutoring is interrupted by a invite to karaoke by Takemoto, but when Ogata mentions she’s at Yuiga, the ground shakes and suddenly Takemoto is there in a flash (she is a jock, after all!)

While she’s not overt about it, Takemoto probably isn’t so high on the idea of another girl spending time alone at Yuiga’s, so she invites herself to join the tutoring session. Only they get almost nowhere when the power goes out.

Ogata uncharacteristically clings to Yuiga, clearly afraid of the dark despite unconvincing claims to the contrary; Takemoto wants in on the fun too and so pretends to be afraid so she can cling to him too…only is too bashful and merely grabs some fabric.

Yuiga comforts the girls by crafting a makeshift candle that he studies by during the frequent blackouts his house experiences (another reminder of his family’s modest means). He reflects on how the lack of electricity brings people closer together, both physically and emotionally.

When Takemoto accidentally blows it out, he fumbles around in the pitch black; not a great idea when there’s two girls in close proximity. When the lights are back on both of them are scandalized and Ogata flees in a huff, but later we learn she managed to write an essay her teacher accepted, all thanks to Yuiga’s reflections on darkness and closeness.

A pink-haired teacher who will no doubt join Yuiga’s group at some point seems almost jealous of the progress he’s making with the girls no one else could successfully tutor. That brings us back to Takemoto, who cannot for the life of her memorize the meanings of any English words. She’s got swimming on the brain, at all times.

After hours of futile family restaurant studying, Yuiga gets creative: if she wants to swim, he’ll let her. With Furuhashi and Ogata’s help, he designs a studying method uniquely suited to Takemoto’s stengths, diving underwater to grab the correct meaning of 50 out of 50 English words, all because she can truly focus when she’s in the water. Perhaps she is a mermaid who one day grew legs… 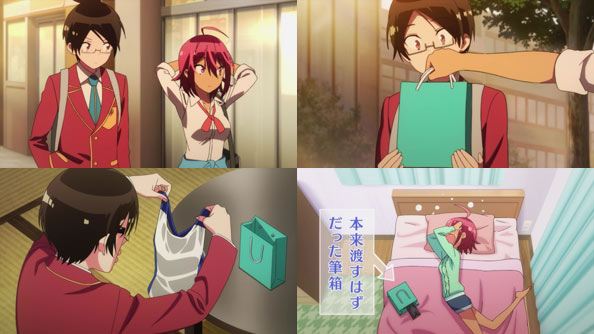 Takemoto decides to thank Yuiga properly by presenting him with a gift in a bag that’s of a very similar color to Tiffany & Co., out of gratitude both for his tutoring and all the other assistance he’s rendered over the years, and as a token of her unspoken feelings for him. I personally maintain they’d make a good couple, but she’s gotta speak up and he’s gotta be made aware!

There’s also the little matter of her giving him the wrong Tiffany-colored bag, so instead of a new pencil case, he got her used swimsuit, something for which he can only scratch his head and ask why; while at home with his intended gift, her plan totally undermined, all Takemoto can do is writhe furiously on the bed, asking for someone to please kill her now…

Takemoto is a welcome addition to the cast. I have a soft spot for childhood friend-characters, especially energetic athletic types (regardless of their success in winning the guy/girl) and her feelings for him are both clear and justified, even if her refusal to ever act on them is frustrating. The easy, caring way Yuiga interacts with them makes it easy to understand why both she and others are fond of the guy. Takemoto is also, frankly, freaking adorable.

I also appreciated that the show kept Furuhashi out of Yuiga’s home study session in order to give the other two girls’ interactions room to breathe; no doubt she’ll get more attention, and Ogata or Takemoto less, in a future episode. And then there’s still two more girls yet to get their official intros, including the pink-haired teacher. Along with One Punch Man 2 and Carole & Tuesday, I think I’ve got my Top 3 Spring shows locked in!