Yume and Mizuto are home alone in the middle of a typhoon, reading alone in their respective rooms, when Yume encounters a cockroach, which renders her room no longer habitable. The two top students in their grade, neither of whom are particular fans of bugs, decide the only option is to sleep together in his bed.

While they start out back-to-back, Yume eventually shifts positions in her sleep, and when Mizuto wakes up and rolls over, he finds himself closer to Yume’s face than he’s been in a long time (not counting that recent time on the couch). He rolls back over, saying he has no room for “lingering feelings” in their new life together.

The next morning, Yume and Mizuto unconsciously act like a couple going through a rough patch, leading their parents to make that observation. Yume’s mom also suggests Mizuto buy a swimsuit for the upcoming family trip to Mizuto’s dad’s riverside hometown.

For their parents’ sake, the former couple proceeds with the swimsuit-shopping trip, and while Yume tries to “disguise” herself with the same glasses she wore in middle school, the fact she’s wearing her new, more form-fitting style would certainly give her away to, say, Akatsuki.

Mizuto waits outside the changing area, somehow not expecting Yume to show him the cute frilly pink bikini she’s trying on…but she does. When he says it merely looks “good” on her, “he thinks”, she asks him to say something nicer, and so…he compliments her devotion to her family.

On their way home they pass by the very quiet side street where they kissed for the first time, at the very same time of day. When the wind knocks Yume’s hat off, Mizuto naturally lunges toward her, resulting in the two ending up in a very similar position to that magical day.

Yume even closes her eyes and prepares her lips for another kiss, seemingly overcome by the atmosphere…but Mizuto hesitates. Later at home, Mizuto and Yume converse awkwardly, trying to keep up appearances, leading their folks to remark how they’re like “a couple working up the nerve to pop the question”.

While it seems like their parents are oddly perceptive, the fact is neither Mizuto’s dad nor Yume’s mom have any idea about their real past. That’s probably for the best, as considering how nice they both seem, it would pain them to know end to know their marriage inadvertently put their kids in such a strange, even cruel situation. 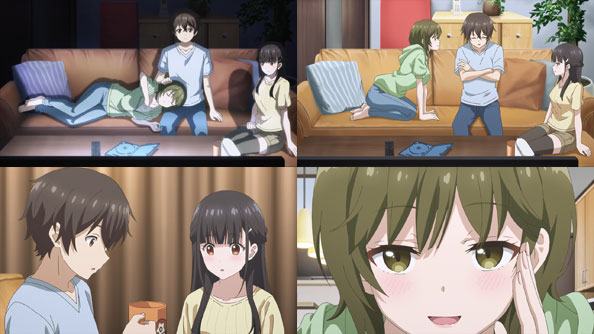 Speaking of cruel, when Isana comes over for the umpeenth time during summer break to watch a movie with Mizuto, she reclines on the couch, rests her head in Mizuto’s lap as he strokes her hair. They’re a picture of a couple destined for a fifty year-plus marriage, so comfortable Isana thinks nothing of scratching around her bra area in his presence.

After the movie Isana gets up, but continues to monopolize Mizuto by engaging in a lively critical conversation in which Yume cannot hope to participate. When Mizuto asks for tea without saying please, Yume serves him some…in her mug, which Isana immediately identifies as an indirect kiss.

Looking down at the sleeping Mizuto in her lap, she realizes why he hesitated, both when they were in the same bed and when they almost kissed in their first kiss place: they both feel the same longing for the way things were, and wanting to go back to those times, but believing it not worth destroying the new life they have together.

Later, Yume’s mom wants details about what’s up with Mizuto and Isana (who earlier said she wouldn’t mind being fuck-buddies or FWB with him). Isana indulges her mom, who then tells Yume she can’t let Mizuto leave her behind; she needs to find a boyfriend for herself.

While lying in bed contemplating her mom’s words about getting a boyfriend, Yume says, out loud, that she doesn’t see herself with anyone but Mizuto, which surprises her. So far, the two have maintained the position that they can’t go back to the way things were, but that’s increasingly easier said than done.

This episode, which finally fully chronicles the height and eventual fall of Mizuto and Yume, begins simply, with the two sharing a tender kiss without fanfare during the golden hour on a quiet street. The look they share after said kiss may just be the only time in the entire episode that they are truly on the same wavelength with one another.

When Yume is invited to Mizuto’s house, room, and bed (to sit on) when his parents aren’t home, she gets understandably excited, only for the two to spend hours reading a book together. It’s pleasant, but it’s less than Mizuto hoped for; she was ready to take the next step. So was Mizuto. But it just…didn’t happen. And it never would.

The first sign of the couple drifting apart is when they find themselves in separate classes for the third year of middle school. They still meet in their treasured library after school, and make a pinky promise to make wonderful memories for Christmas and Valentine’s. But then Yume gradually opens up and makes friends in her class.

Mizuto is irked by her newfound popularity, and when they are together, all she talks about is her friends this or her friends that. Feeling like they’re drifting away from each other hurts, so he hurts her back by snapping at her. He fully prepares to apologize the next day, but when Yume first sees him in the library, he’s chatting with another girl…in her chair. 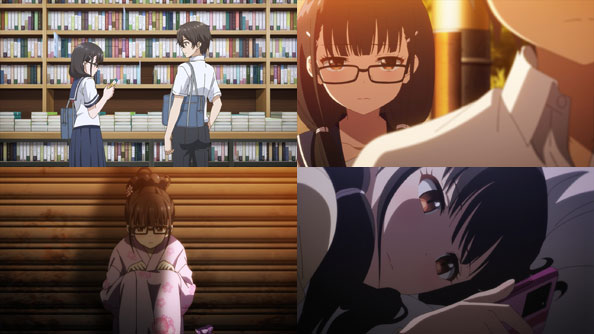 His apology goes right through her, as she feels he betrayed her in the special place where they met and shared so many memories. And that bitter memory of seeing him with that other girl haunts him. It’s just a fight couples always have, but they let it fester and see less and less of each other.

When they finally encounter one another, it’s by chance at a bookstore, and Mizuto suggests, and Yume agrees, that they should make up and put the rancor behind them. But it’s just words. Mizuto is still hung up on being accused of cheating, while Yume is vexed by how far ahead he’s walking.

Once inseparable, the two fall completely out of sync, and their relationship falls off the rails. Yume thinks of inviting Mizuto to the festival where he found her, but fails to send the invite text and goes alone, hoping things will just work out like they did a year ago, even though she knows they won’t. Then their one-year anniversary comes and goes with nary a text from him.

The Christmas and Valentine’s memories they promised to share become exercises in bitter solitude, as both Mizuto and Yume remain incommunicado for those holidays. Finally, when graduation comes along, Mizuto quietly suggests, and Yume agrees, that they should break up.

At that point it felt less like and end and more like a “liberation.” He couldn’t deny his affection for Yume, but couldn’t deny the building resentment either. Little things turned into big things and finally the only thing: pain and anguish. The rest, we know: their parents get married a few months later, and they are introduced to each other as stepsiblings.

Fast-forward back to the present, where Yume is helping herself to one of Mizuto’s many many books, and happens to land on the same one they read together the first time she entered that room. The two reveal to one another in reminiscing that they both had the same intentions that day: to take their relationship to the next step.

You could say that day was really the beginning of the end, since it led to “aged plagued with regret” for Mizuto and “wasted time feeling she was undesirable” for Yume. And yet, thanks to their parents, a new beginning was written; one that allows them to reflect on their past missteps while seeing each other in a new light.

It was powerful and affecting watching their bittersweet first relationship crash and burn so utterly. From the cozy warmth of their (presumably) first kiss to the stark chill of their breakup scene, it was a harrowing roller coaster of a tale that added fresh context, richness, and gravitas to their present-day dynamic.