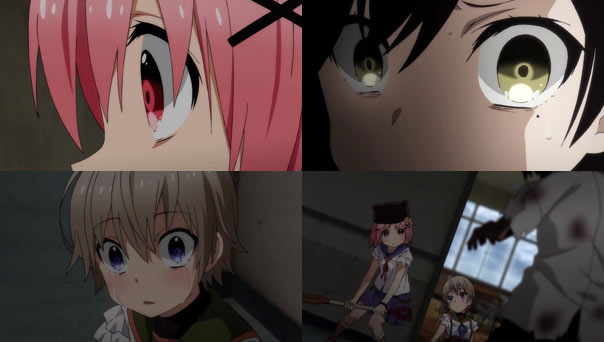 After multiple events at the end of last week’s episode piled upon each other like so many zombies, spelling imminent doom for the School Life Club, this week starts off with a continuation of that despair, with no shortage of intense terrified close-ups of Rii-san and Miki. But Yuki’s expression is different. It’s not existential fear…it’s an awakening, which comes in the form of a sudden flash as she sees her former choker-wearing classmate as she truly is.

That awakening continues gradually and painfully throughout the episode, as more and more, it becomes clear Yuki is the only club member who can save everyone. Her emotional scars are re-opened and reckoned with, and the same voice in her head that’s taken the form of Megu-nee for so long steps into high gear, putting Yuki not only in a position to stay alive, but help the others, starting with Miki. Now that she finally sees again the danger she and her friends are in, she doesn’t crumple into a ball; she picks up a shovel. 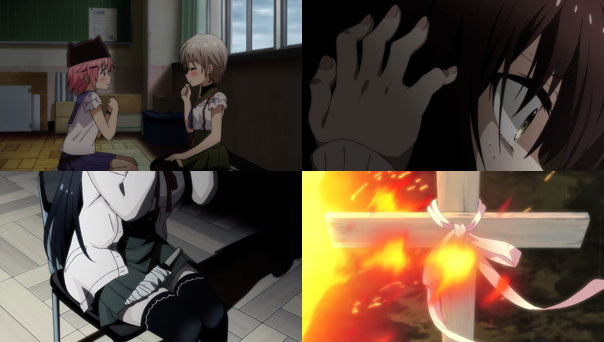 Nostalgia, despair and hope go hand in hand (…in hand) this week. Rii-san remembers promising to “do what must be done” if Kurumi were to get infected, and as she’s being slowly driven mad by Kurumi’s increasingly horrifying moans and screams, with a knife in her lap, Rii-san starts to contemplate fulfilling that promise. Meanwhile, the zombies are everywhere, including the roof, where a lightning storm ignites the zombies, who then ignite the crops and Megu-nee’s grave marker. 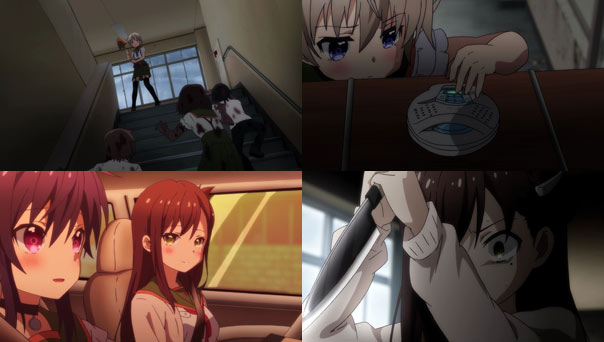 With all this grimness, Yuki’s strength in this time of ultimate crisis, and her desire to have more fun times with the club in the future, inspires Miki to action, after she was briefly paralyzed by her grief over Taroumaru. She then use’s Kei’s discman to try to sooth/distract the zombies at another barricade as she heads to the basement to find medicine. As that gorgeous music first we heard in episode 4 plays, we return to the day the club drove out in Megu-nee’s car and ended up saving Miki.

On the drive home, Kurumi and Rii-san (the only two still awake) talk about whether the zombies are still “aware”, and Kurumi hopes they aren’t, after all the terrible things she’s done to them. She says she had no choice—it was them or her—and she’s right. But that doesn’t make what she’s done, or not knowing the true nature of the zombies, any easier a pill to swallow.

Back in the present, Rii-san prepares to stab Kurumi to death…but just can’t do it, thus avoiding the possibility of Miki getting the antidote, only to return to find Kurumi is dead. If Rii-san isn’t already FUBAR, she certainly would be under that scenario. 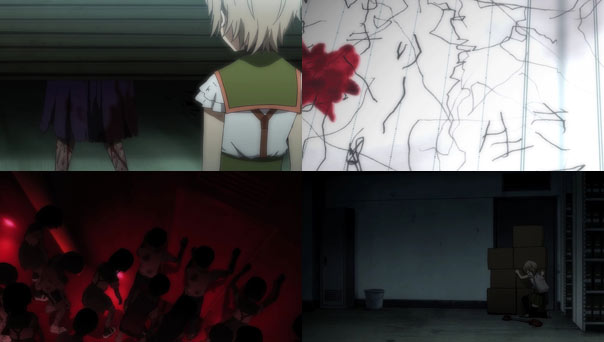 But Miki is still a long, long way from getting that antidote to Kurumi. It’s by no means a sure thing. She encounters Megu-nee down there, gets cornered by her and pays her respects, cognizant of the possibility the teacher’s stayed down there all this time in order to prevent hurting her still-living students. Despite that apparent awareness Kurumi mused about (and hoped wasn’t true), Megu-nee is still, ya know…a zombie, and grabs Miki’s ankle, forcing Miki to take her out.

Just then, as if there was a chip in Megu-nee tied to the school (though probably a coincidence what with the roof generators going haywire), an alarm sounds and red lights come on, and a P.A. system announces emergency power has been activated for the shelter (which probably means batteries, which aren’t going to last). All that noise attracts hordes of zombies to Miki’s location, and she ends up trapped in a room, unable to act, just like when she was at the mall. 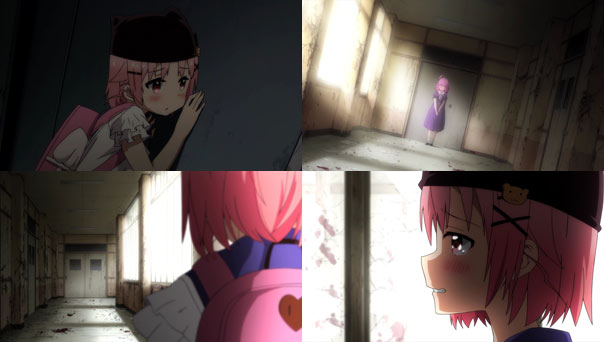 Thus Yuki becomes the only one who can save everyone. She does so by finally opening her eyes to “the hard stuff” she left to the others for so long, even before she went into her dissociative state, because she deemed herself clumsy and weak. But she’s able to use a vision of Megu-nee to get to the place she needs to be, have one last conversation with her through a door before opening it, and seeing, finally, that Megu-nee is no longer around, that she’s gone, and now it’s up to her.

It’s not easy, nor is it painless, but it’s what has to be done, or, Yuki knows, the School Live Club is finished. Her smile and her silly optimism sustained the club for so long, but now she has to do more, by breaking out of the protective shell she created in her mind, facing the reality of her situation, grabbing a bat, and getting to work. Everyone is counting on her.

No matter what happens, everyone will be scarred by this day they’re having. But can Yuki stand strong and act; protect and guide as Megu-nee did; be the new guardian angel, so that she and the others can live a little longer? I hope so. 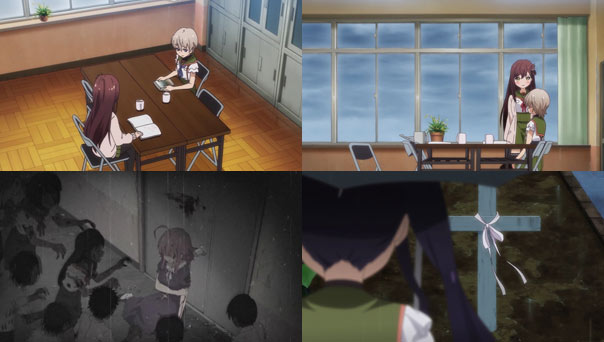 Fun Time is officially over as shit hits the fan on all fronts in this taut, slithering, devastating, unforgiving powerhouse of an episode. It starts quiet on a rainy morning. Miki laments that she’s finished her book—at the end of which its implied the dog comes to a bad end—Rii-san informs her why she’s so down: this is the same kind of day when they lost Megu-nee, their sensei and caring protector. Ever since then, Rii-san has been trying to fill the void Megu-nee left, and the strain shows this week as pretty much everything that can go wrong, does. 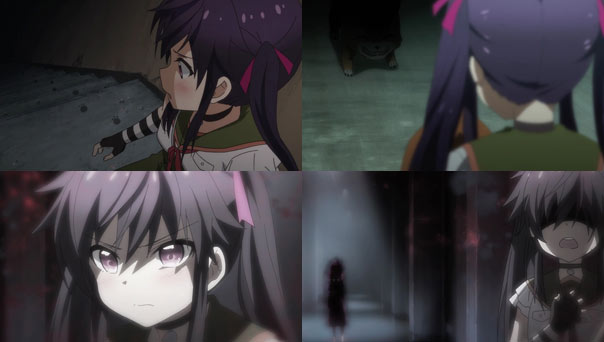 Kurumi, the muscle of the group, confidently strikes out to find the escaped Taroumaru, assuring Rii-san she won’t do anything rash. She ultimately can’t abide by that assurance, first locating a zombified Taroumaru, then Megu-nee herself, in the previously un-explored basement. Why she goes alone is beyond me, but like I said, she’s a tough one, so I guess Rii-san felt she could trust her to come back safe and sound on her own. 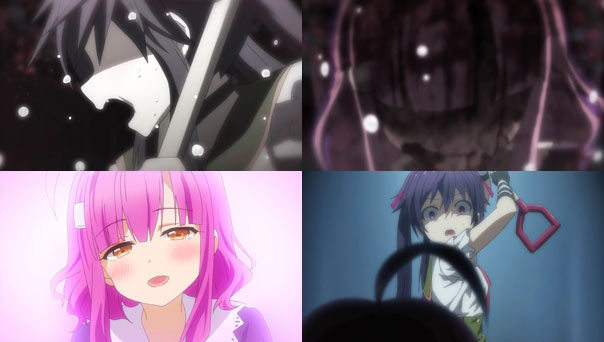 As soon as she spots both Taroumaru and Megu-nee, Kurumi knows what she has to do; it’s just a matter of being able to do it. She was able to kill her would-be boyfriend before he killed her back when this all started, but her hesitation results in Taroumaru running rampant until she can trap him in a room (with a non-sliding door he can’t open). And when Megu-nee raises her face, Kurumi can’t help but see her memory of her warm, beautiful, heroic teacher, not the shambling monster before her. 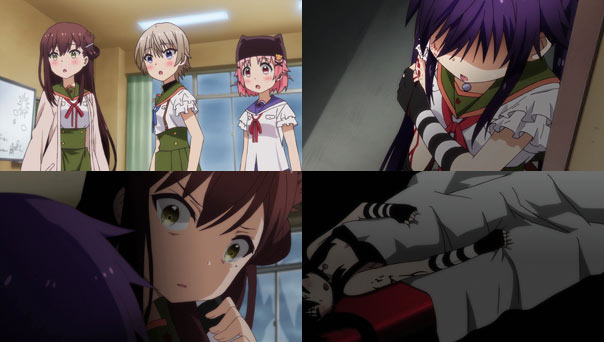 She loses her nerve, and Megu-nee bites her. Damn, that was fast. Kurumi gets back to the safe zone, but it isn’t long before the wound starts to fester, and it becomes pretty clear that things are not going to go any better for her than they went for the dog or the teacher. It’s only a matter of time. 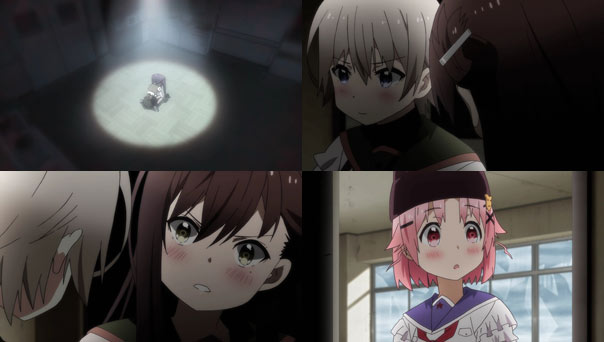 During this time, as she screams in her sleep, we go inside her head, where she’s trapped in a nightmare in which countless zombies stalk her from just behind the walls of a classroom she’s in.

When they break through, her mind will be lost and she’ll be one of them. The only glimmer of hope she can be saved comes when Miki consults the emergency manual, which indicates there’s medicine—an antidote?—down in the basement shelter.

Rii-san doesn’t want Miki to go alone, but she doesn’t have much choice; she has to be there if and when Kurumi turns. As for Yuki, her bubbly obliviousness is more of a liability than ever. Miki and Rii-san are going through emotional issues of their own, and they have no time to babysit her. 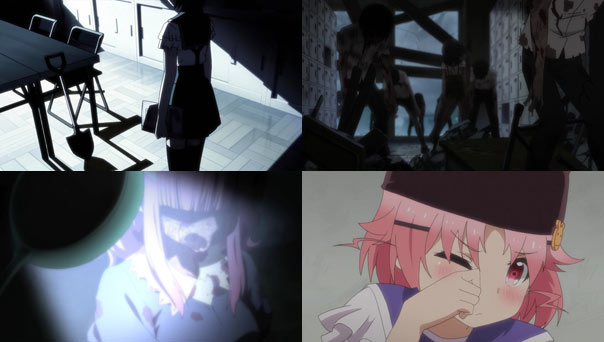 Miki finds Kurumi’s shovel, but also spots Taroumaru’s still-full dog bowl and collapses into tears, remembering how Kurumi lamented that she’d “failed”, and believing she too had failed to protect Taroumaru, just when they had kinda become friends last week.

Miki claims not being close to Megu-nee (who we see sitting down there, “writing”) will make it easier to take her out, but the dog’s down there too, so her task to grab the medicine—before Kurumi turns—is not going to be easy, to put it mildly.

As for Yuki, when she stops in the hall to remark to herself how today is like “that day”, and she then asks herself what “that day” is, and then feels the cold rain hitting her on the face. She sees the broken window now, just as the zombies burst through the ground floor and start bringing the barricades down.

We can imagine what she’ll see next week. The question is: how will she react to her sudden awakening? Will she be able to play a role in her own and everyone else’s survival, or are they all doomed?