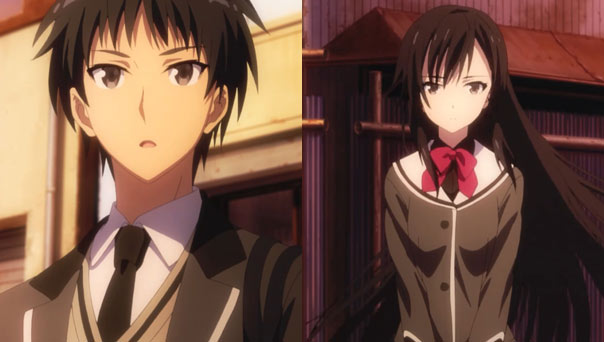 Haruchika and Prince of Stride had pleasant enough first episodes, but weren’t particularly dazzling or earth-shattering. To be honest neither is Shoujo-tachi wa Kouya wo Mezasu, but it did do something more often than those other two shows: it made me laugh, and it impressed me with its characterization and snappy-ish dialogue. So far, SKM reminds me of a quieter, less punchy, less fanservice-y Saekano. 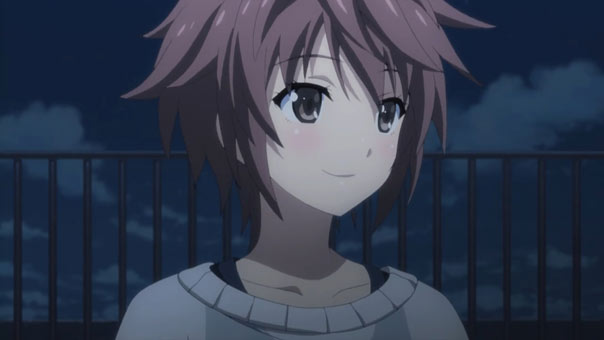 Continuing the theme of honesty into this second paragraph, none of the characters in SKM are staggeringly unique, but they’re well-executed and I quickly came to root for not only the hard-working, gregarious Houjou Buntarou, but also his little circle of friends, the “inconveniently popular” Kai Atomu and in particular his good female buddy/possible childhood friend Kobayakawa Yuuka, a talented girl who wants “to do everything she wants to do” whom Hanazawa Kana breathes life into. 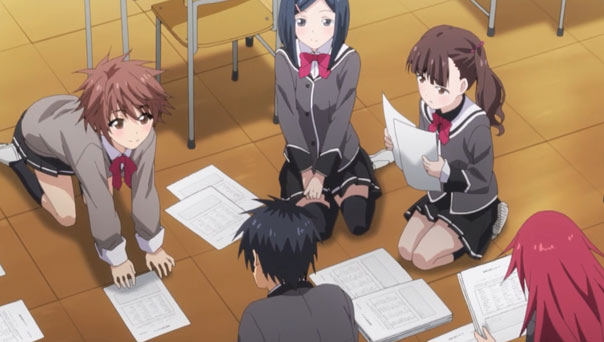 While the raven-haired loner maiden Kuroda Sayki gazes mysteriously from afar, “Bunta”, as everyone calls him, is always in the thick of it, whether it’s seeing to everyone’s needs at the restaruant where he works, to shooting the breeze with his neighbors, to settling classroom disputes amicably. He’s a nice guy; the only problem is, unlike Yuuka, he has no idea what he truly wants to do. 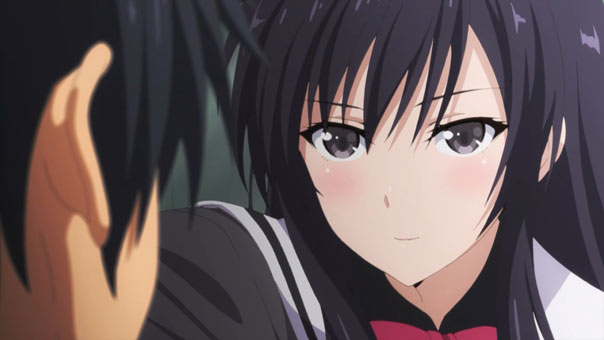 Enter Kuroda. In a uncomfortably funny (but not vulgar) scene in the men’s room, she has a very interesting (and also funny) conversation with Buntarou, likely the longest one he’s ever had with her by far. It’s full of compliments: he’s observant, in tune with the needs of those around him, and knowledgeable about the “leisure areas” of town. Their talk ends with Kuroda asking him to arrange a date for them on Saturday, so she can tell him something she can’t say at school. 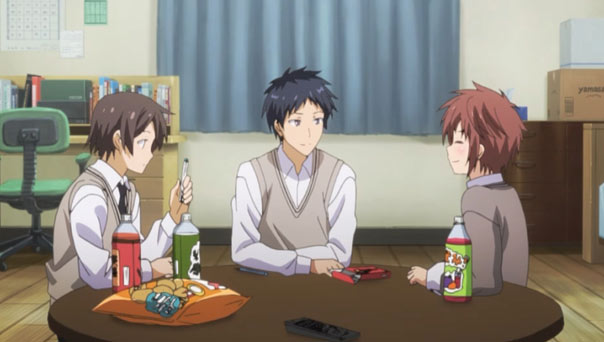 From the get-go, I had the feeling this wasn’t anything as simple as a date with a girl who likes him, but rather some kind of evaluation by a girl who might find him useful. Nevertheless, Bunta proceeds as if it were a conventional date, complete with accepting Yuuka’s offer to put him in touch with an underclassman known as the “Bitch Queen” who offers him sage advice on tomorrow. Her line about “cladding herself in innocence for the sake of her bitchiness” was pretty amusing, and I hope we get to put a face to the voice.

The day of the “date” arrives, and Kuroda encourages Bunta to take the lead, showing her a good time at the amusement park while responding to most of his personal queries with “it’s a secret.” By sundown, he realizes what we viewers realized, but like me, he knows there’s nothing sinister about her motives.

Rather, she takes him to a game store in Akiba, shows him the value of the successful games versus the failures, and lays out what she wants: to make a bishoujo game with him. She believes he has the writing chops and the personality to help make her dreams come true.

As for the details of those dreams, all she’ll tell him is that “the world is a wasteland” where “the innocent are only devoured”, and wants to strike out and stake her claim in that wasteland with Bunta by her side. Bunta, unsure of what to do up until now, has been given an intriguing opportunity; he’d best not waste it!