While last week was more of a battle between Kyoutarou and Nagi’s Shepherd philosophies regarding Senri’s path, this week focuses more on relationships — specifically, little sisters. Now that Kyoutarou remembers Nagi being his little sister (half-sister; his dad had many wives) who he once saved from pedophile house servants (!!!) Nagi decides she’s in a playful mood and commits to it, moving in with Kyoutarou, who doesn’t resist.

While Kana is busy making sure Senri has as much fun as she can (read into that what you will), Kyoutarou pays for the privilege of having a busty and voluptuous house guest when Tsugumi makes an unannounced visit, and she comes right out (well, not right out) and asks him to be her boyfriend. 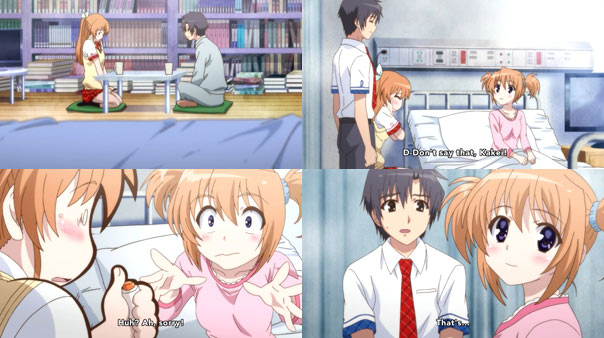 Well, to pretend to be her boyfriend, at least, for when they visit her little sister Sayori. Even though she’s little and bedridden, Sayori struck me immediately as stronger, more assertive and honest with her feelings than her sister, and sees through the ploy instantly. She’s actually a pretty cool and mature sibling, not at all your typical unreasonable brat who gives her sister’s guy a hard time.

On the contrary, she’s grateful her ‘introverted’ sister has his and her friends’ support. You get the feeling Sayori would rather not be in the hospital so she can look after Tsugumi properly.

As thanks for his service, Tsugumi wants to make Kyoutarou dinner, but since Nagi has moved in, he has to temporarily relocate her to his balcony while she does so, lest Tsugumi get the wrong idea. I’m not sure at this point what the right idea is, though. Why does Nagi want to play house so bad? Getting her kicks in before becoming a shepherd, I guess…but doesn’t constant proximity to him soften her resolve? 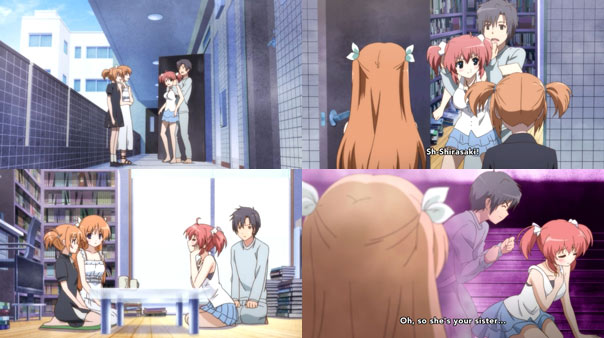 In any case, the next day Tsugumi arrives with her discharged-for-the-day sister, again unannounced. This time Nagi won’t go quietly onto the balcony, and instead creates a sticky situation for Kyoutarou, who must explain more to Sayori than Tsugumi, what exactly is going on. Nagi doesn’t help matters by letting on that they’re up to more than they really are, and Kyoutarou’s sister excuse does seem flimsy, even if it’s technically the truth.

Nagi may think this is all a big joke and everyone will forget her soon anyway, but Sayori isn’t laughing; she’s legitimately concerned for Tsugumi and wants straight answers. She gets so worked up she collapses. Rather than risk waiting for help, Kyoutarou begs Nagi to use her book-teleportation power to take Sayori to the hospital. Perhaps aware that this is kinda all her fault, Nagi obliges. 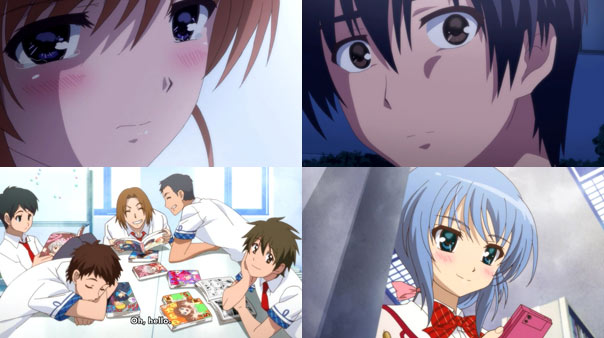 Of course, this means Tsugumi has seen the power of the shepherds, and Kyoutarou tells her the rest, about how he’s in training. Their trip home is silent and awkward as you’d expect, and Kyoutarou figures Tsugumi would rather have nothing more to do with him, but in that he’s sorely mistaken: Tsugumi uses the opportunity to beg him not to go anywhere or be erased from her memories, and then confesses to him.

She walks it back a bit, but it’s out there, and it isn’t as if Kyoutarou isn’t receptive. In fact, could this have been Nagi’s plot all along; to get him and Tsugumi closer? Was she just pretending to be put out by Tsugumi’s visits?

Oh yeah, and the clubroom has been suddenly overrun by a bevy of manga-reading, formerly inactive guys, which is Takigawa’s doing. It appears the Veep won’t allow the club’s pseudo-Shepherd-like activities to continue. How will they fight back?

Who makes a better Shepherd: the one who would guide their sheep along a life path that makes the most of their latent talent, or along the path that would net the sheep the most happiness? The question begs asking, because in the case of the “Song Princess” Misono Senri, those two paths are divergent.

Simply put, as good as she was, or is, or could be at singing, it just doesn’t make Senri happy anymore, which has led her to neglect her practicing. It hasn’t made her happy ever since she learned her best friend Serizawa would quit if Senri beat her. Senri took a dive, yet still won, and lost Serizawa anyway. Her talent hurt someone dear to her, and caused them to drift apart.

So why keep singing, when it only gives her pain and reminds her of what she’s lost? If she does keep singing, who’s to say she won’t lose more friends to her talent? Nagi, as Shepherd-in-Training, takes the road of maximum talent cultivation at any cost: Senri must get back on track, or she’s doomed to become ‘just an ordinary student’.

Kyoutarou inserts himself in Nagi’s mission and ends up taking it over completely, taking the other road: the road of happiness. He does this not to one-up Nagi, but because he wants to help his friend. His answer is, if singing is painful, Stop. Enjoy life. Have fun with friends. Don’t worry about the labels others give you. Make your own mark. Do what you want, not what’s expected of you. He even suggests the same of Nagi herself. 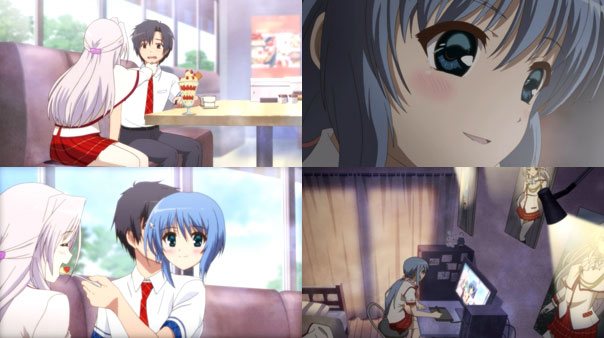 Meanwhile, what do we have here? Oh, just Vice Predient Tokigawa obsessively photographing President Mochizuki and photoshopping her face on Kyoutarou’s body for pleasure. She also seems to be in contact with ‘a’ Shepherd, though which one who can say. I can’t say there’s enough here to work with, so I’ll just move on. :)

Back to Senri, who takes to Kyou’s advice like a fish to water. Who hasn’t reveled in waking up only to realize you can go back to bed? Such Luxury! Or helping her fellow library club members plan their upcoming festival event. Or goofing off with Kana, who assures her no one in the club will hate her for doing what she feels she needs to do to be happy, even if that’s quitting singing forever.

Tamamo initially takes a sterner position, saying she can’t abide people who waste their talents, but later confides to Kyoutarou (in a scene where she’s very physically close to him) that it was her jealousy speaking; she herself wanted to be an artist, but her family forbade it in favor of a path that would lead to more success, if not more happiness. So she doesn’t really begrudge so much as envy Senri’s situation.

As the episode progresses, one cannot argue that Kyoutarou’s way has resulted in a much bubblier, happier Senri, who literally makes her mark on him by stamping his hand with a smiley face. When Serizawa confronts him about rumors the Song Princess has quit, Kyoutarou refers to the canary who lost its song.

Then Nagi confronts Kyoutarou, warning him that he could be condemning that canary to a life of mediocrity. Kyoutarou, who is content to give Senri time to ‘find her song anew’, as it were, wonders why Nagi is in such a damn hurry to ‘fix’ Senri…

That’s when the environs darken and the Shepherd recruiter appears, telling Kyoutarou he’s passed the second exam and can become a Shepherd anytime he wants. They transport to the Grand Library, where the recruiter presents Kyou with Nagi’s book.

Nagi, as we know, is in a hurry to cast away her past in order to become a Shepherd, but as Kyoutarou learns once he opens that book, that is prohibitively difficult as long as her past is right in front of her: Kyou was her “big brother,” which I assume is a term of endearment, rather than an indication they’re actually related.

This is not so much a huge shock for us considering Nagi’s behavior these past eight episodes, but it definitely puts her in a new light for Kyoutarou, who has the power, if he desires to use it, to ensure she lives a normal life, even if that’s not what she wants.