After a long wait of approximately eight hours, Psycho-Pass is back, and is as velvety dark and cerebral as ever. Things start off with a bang, from a demolition expert’s bomb, in a return to the early part last season’s criminal-of-the-week format. But while in that season’s first episode, the innocent, impressionable rookie inspector Tsunemori Akane tried and failed to defuse a situation, shooting her own enforcer in the process.

This time, she’s a little older, and a lot wiser, takes full control of the situation, and with one eye on the future she wants to build and another on the desire to preserve life whenever possible, gets a much more favorable outcome. It helps that her innocent, impressionable rookie Shimotsuki Mika (Sakura Ayane) doesn’t get in her way or muck up her plan. She does what she’s told and complains a little, is all.

She has no idea of the horrors and struggles her partner has seen, or the secrets she must bear. Mika is content to rush in, point the Dominator at the target, and shoot. In the culprit’s present state, that would mean death, which Mika is fine with because it’s what Sybil recommends. But it’s not fine for Akane. She is patient and thoughtful in the application of her duties. 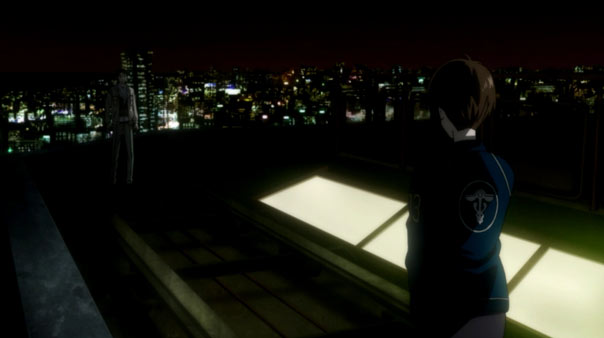 She also studies the culprit throughout the episode. He seeks to minimize innocent casualties. He’s purely concerned with punishing MWPSB, the agents of the system that sentenced him to a life of mediocrity. While others dismiss his online screeds as paranoid nonsense, Akane sees someone genuinely concerned with society’s direction, not someone who has totally turned his back on it. 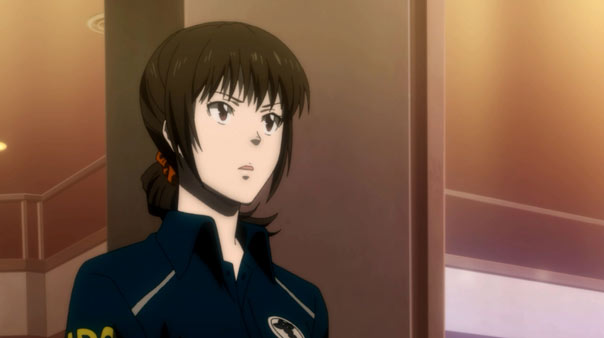 Culprits’ Crime Coefficients rarely go down, especially in the heated rooftop standoff that occurs. But as long as there’s a slight chance of saving an individual’s life, Akane is going to give it her all to make that happen. It’s a great moment when she finally succeeds in getting his CC down below 300, activating the Non-Lethal Paralyzer. It feels like justice, administered by the one holding the gun, not the gun, itself. 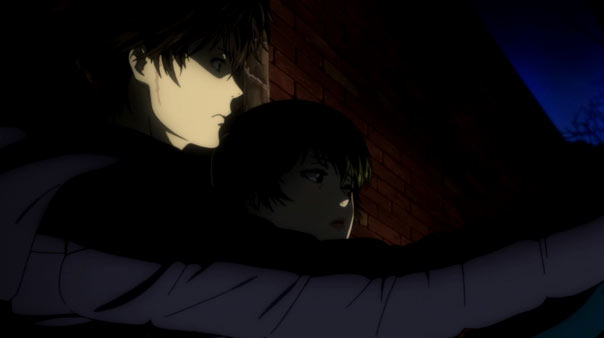 After the crisis passes, Mika doesn’t seem convinced. She’ll learn. In one of the better touches of the episode, Ginoza tells her as much in the same way his late father Masaoka coached Akane, even calling her “Missy.” The show also ends with the expected twist to reveal the villain behind the villain, in this case, someone who isn’t just criminally asymptomatic, but whom technology doesn’t even recognize as a living being. Interesting.

Akane doesn’t believe the law protects the people so much as the people protect the law. The law in the culmination of mankind’s amassed hopes and dreams for a better world to live in; without that collective input, the law—and society—cannot exist. When the will of the people is usurped by a system like Sybil, the momentum of human progress towards that ideal goal is arrested.

I said all Akane cared about was saving Kogami’s soul, but once it became clear after a heartbreaking sequence of events that she wasn’t going to be successful, I realized I was wrong about her becoming lost if she did fail, or that her desire to save Kogami was selfish. To her, no matter how vicious Makishima’s crimes were, on-the-spot execution is a crime, and she does everything in her power to prevent that crime. She just came up a bit short.

She wasn’t being selfish; she was being patient. She doesn’t like Sybil anymore than Kogami or Makishima, but she knows society as it is can’t live without it; not yet. So she’ll continue being one of their ideal poster girls. She does exactly what she’s done every time something horrible has happened in her life, whether it was her first traumatic experience as an inspector, losing Yuki, or losing Kogami, twice: she moves forward.

Sybil is disappointed that Akane couldn’t deliver Makishima to them, but that doesn’t mean they cut her loose. They “lower her ratings” a bit, but they’re sitll all outstandingly high. They want to someday reveal themselves to the world as they did to Akane, and when that happens, they want the people to accept them and be happy about it, and they think Akane and people like her will help pave the way to that. Faced with that grotesque hubris, sucking up her pride is actually quite selfless on Akane’s part. 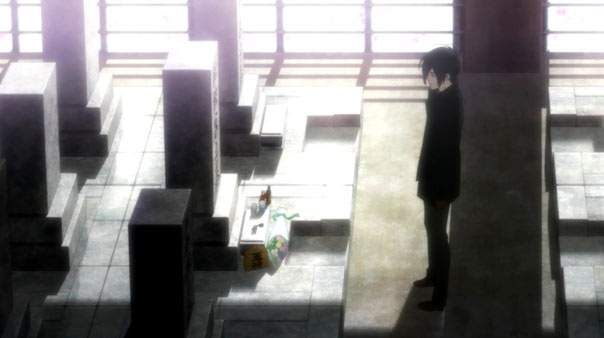 Two months pass, and we’ve got some changes, all of which do a decent job of setting up the second season that arrived a couple days ago. That’s right, because of the timing of my watching of Psycho-Pass, I will not have to endure a two-plus year wait, but will jump right back into it. Ginoza is now an enforcer, Shion and Yayoi still seem to be having pretty okay sex, and Akane is now in charge of the division.

Perhaps most awesomely, the show ends on a note that may not bode well for Akane’s chances of exacting the change she wants, rather than the “evolution” Sybil seeks. That’s because the show ends just like it began: with a young and eager rookie inspector arriving on a tense crime scene, and the more seasoned inspector telling her they afford to go easy on them. Only this time Akane is the seasoned one and Shimotsuki Mika is the even younger rookie in question. That’s some fantastic symmetry there.

It may intrest you to know that even though we only saw her for a brief moment, I found myself identifying more with Mika, as I did with Akane when she was new. Considering how long this show has been around, I kind of feel like the second line that Mika represents, who can only repeat the deeds or mistakes of her forbears. Similarly, most of what I’ve prattled on about in these twenty-odd reviews may have already been said before in different forms, but better to have stumbled on this great piece of quasi-Utopian fiction late than never. Thanks for bearing with me. On to Psycho-Pass 2.