It’s a given that Matsuri would lose the Battle of Yuzu, and that she’d lose for one simple reason: it’s not a battle, or at least it’s not supposed to be. Life isn’t a video game and it isn’t zero-sum.

While that can be unsatisfying and frustrating for someone so seemingly adept at “playing the game”, it reveals that Matsuri’s “game” is actually very limited, specialized, even stunted, and that there’s a lot more for her to learn, much like Mei and Yuzu.

For now, however, Mei simply concedes the first round, with a longer game plan that’s a lot clearer than I thought, but with no guarantee of success. Matsuri tells her to buzz off or she’ll leak the photo of them kissing, and just to twist the knife, orders Mei to go on a date with one of Matsuri’s old creepy “texting buddies.”

Mei knows how much Yuzu is looking forward to the Christmas party—she can hear Yuzu gushing to Mama from the hallway, but Mei tells her she must decline…”extra council work that can’t wait.” When Yuzu tries to persuade her to reconsider, Mei tells Yuzu to be with Matsuri, stating “that girl needs you.”

The next day after school, Mama Harumin almost inadvertently gets Yuzu to discovr Mei isn’t working with the school council when she suggests Yuzu help out with the council if she wants to party with Mei later. Unfortunately, Matsuri intercepts Yuzu on the way to the office, and insists they go on their date together. Heeding Mei’s words last night and goes along.

In hindsight, Matsuri should probably be ashamed of herself for thinking Yuzu would react by shunning Mei and running into her open arms. Then again, at this point in her emotional development, winning, and beating Mei, and anyone else between her and Yuzu, is more important than how Yuzu feels.

Round Three is ALL MEI. Yuzu may not have seen what Matsuri was doing before, but she’s sure woke to it now, and excoriates Matsuri for trying to hurt Mei, the person who “looked at her the most”, even urging her to pay more attention to Matsuri.

“Relationships aren’t games,” Yuzu yells in the full restaurant, not giving AF who hears. “Don’t sum them up with cheap words like winning and losing!” Dayum Yuzu, coming through in the clutch. 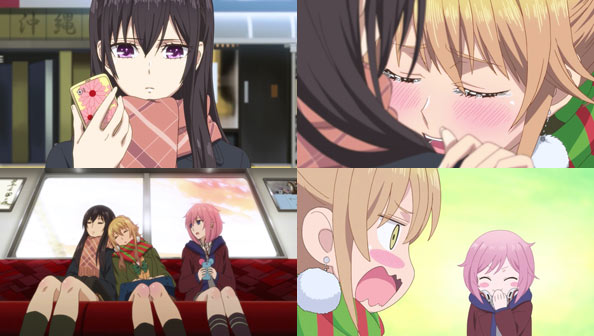 Turns out Mei didn’t have to sleep with anyone; and Yuzu manages to find her at the meeting point. She runs to Mei and hugs her, in tears over what Mei went through, or more precisely, what she let Matsuri put her through.

The three share the train ride back. Matsuri is still thinking in terms of winning and losing, (and let’s be honest, Mei DID win here) but at least tries to correct herself from that kind of talk.

The reason Mei won is that she and Matsuri are so similar, seeking love everywhere while hating those around them, closing their hearts, and refusing to accept anything. It left Mei empty, as empty as Matsuri must have been feeling.

But she didn’t count on a “meddlesome person” like Yuzu entering her life and giving her unconditional love even when she didn’t ask for it, filling a bit of that emptiness.

That night, Mei insists on having a slice of the cake Yuzu worked so hard to make for Christmas. Yuzu calls her stubborn, but Mei replies that’s who I am. Just as Matsuri had to learn that relationships aren’t only about winning and losing, Mei has to learn to be more open and honest to Yuzu.

And the truth is this: Yuzu makes her heart race, just like Mei makes hers. But there’s things inside Mei that will please her, and things that will terrify her. Bottom line, if she’s still adamant about some kind of romance, Mei is game, but Yuzu will have to take and accept all of her, including the warts, and be content that she isn’t going to change, any more than Yuzu should.