Kasumi is taking all of this weird stuff going on very slowly and carefully. He keeps Asuha out of it for the time being, so he can try to dig up some info on what it is that’s happening to him. He manages to find a ruined building that still has power, but it’s paper books that give him answers, and images, that suggests something very strange going on.

Asuha, with no one else to turn to, turns to Ichiya, who is still angsting over the loss of Cana, but still agrees to help lead the defense during the latest Unknown raid, since he believes he’s the only one who can give proper direction to said defence (making me wonder why they put Aoi in charge in the first place). 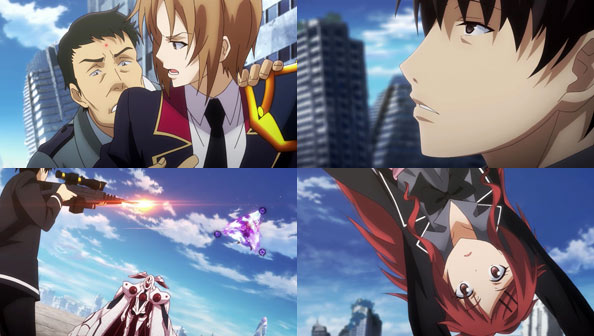 Kasumi decides to use this battle to “jailbreak” Ichiya, in a very strange (from Ichiya’s perspective) way: he kills an adult trying to force Ichiya to retreat, then when Ichiya confronts him on a rooftop, Kasumi fires at him and not the humanoid Unknown in front of him. Indeed, Kasumi seems capable of communicating with the ‘enemy’.

At the same time, Asuha is outnumbered and starts to feel like things are going to get very bad, but the Unknown only target her Code, and once it’s shattered, see can see that the Unknown standing before her is actually…a person.

All that’s left is for Kasumi to get Ichiya into a position where an Unknown can shatter his code, thus completing the “jailbreak.” This uncommonly affectionate Unknown turns out to be Canaria, whom I figured was going to return sooner or later.

I don’t mind her resurrection, because the details of her death were so strange I was never 100% convinced she was dead anyway. Her death also turned Ichiya into an even more insufferable wretch, so knowing she’s alive will certainly improve his character, since he’s going to do everything he can to make sure this time he’ll protect her.

And just like that, all six main characters are now aware that the world they’ve seen and lived in as long as they can remember is not, indeed, real, or at least not the only world that exists. The “red” world they can now see, however, is hardly welcoming.

Qualidea Code ups the weird in a big way by bringing everyone in on the big secret. It really sells it with awesome sound design and an atmospheric Iwasaki score. I can’t wait to see what comes next.

This week QC demonstrated its adeptness at extinguishing its own peril and momentum. After blowing open a huge door last week, building upon all my suspicions about the world the kids inhabit, it allowed that door to partially close, albeit leaving it open just a crack. 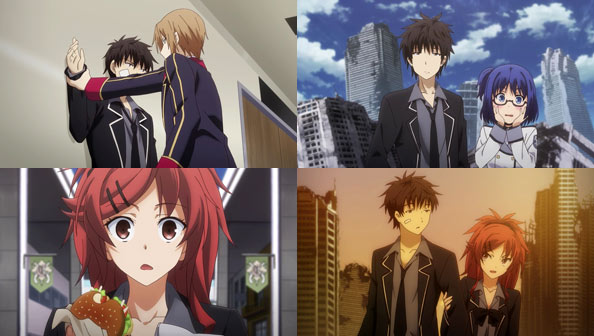 The apparent “deaths” of Hime and Hotaru created a desperate situation, and yet Kasumi and Aoi are able to goof off on an extended inspection “date.” That desperation is more or less quandered so we can witness events that do little but reiterate the deep bond we always knew existed between Kasumi and Asuha. While we haven’t seen Asuha following her brother on a fake date, I’m not sure we needed to, especially now. 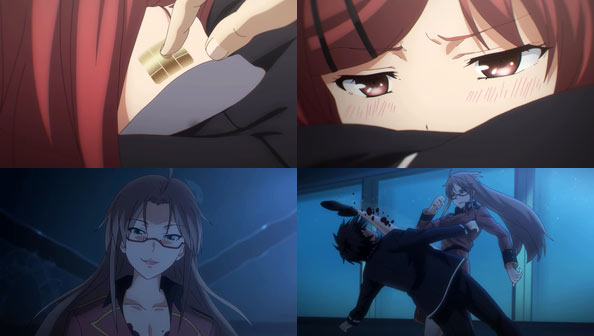 Suffice it to say, the two are good siblings to one another when it counts, so when the evil adult superior Ookuni tries to convince them to transfer further inland, and both outright refuse, and Ookuni tries to corner Kasumi and kill him in the clumsiest way possible, Asuha is right there to bail him out.

What Asuha doesn’t know yet is that her brother has already peeked through the door opened last week. He can see bits and pieces of the “real world” the codes on their necks seem to be suppressing. In her generic villain speech before trying and failing to kill Kasumi, Ookuni provides a little more insight: that she considers the kids “livestock” who need to be kept asleep to serve her needs.

Well, Kasumi isn’t fully asleep anymore, and Ookuni is dead (and there’s nothing left of her, thanks to some overkill by Asuha). Asuha is still “pure” in that her code is intact, but if there’s anyone she’d believe if they told her the secret they’ve discovered, it’s Kasumi.